Should we recommend mammography screening for women between the ages of 40-50?

In a recent article in the Lancet, this question was addressed by a group of investigators led by Sue Moss, Ph.D. from the University of Leeds.  Currently, the  National Cancer Institute, U.S. Preventative Health Services Task Force and the American Cancer Society all recommend screening at a younger age(those between 40-50).  The task force, however, does recommend educating your patients about the potential risks/benefits regarding mammography at a younger age.  Screening women older than 50 has been shown to reduce mortality from breast cancer by about 25%.  Benefit in younger women has been previously suggested in multiple trials.  In fact, a meta-analysis of the trials showed a 15% reduction in breast cancer mortality in these younger women.  However, previous trials have not been specifically designed to study the effect of screening in this particular age group.

In the AGE trial; 160,921 women aged 39-41 were randomly assigned in the ratio of 1:2 to an intervention group of annual mammography to age 48 years to a control group of usual medical care.  The control group would begin yearly screening at age 50-52 as recommend by the NHS in England.   Follow-up at 10 years found a reduction in breast-cancer mortality in the intervention group of 17%, which did not reach statistical significance.   These results are consistent with results from other trials of mammography in this age-group.  The absolute benefit is generally lower than for women older than 50.

Things to consider in this trial:

Therefore, based on this paper, it is doubtful that many governing boards in the U.S. will stop recommending yearly screening starting at age 40.  Keep in mind that more modern screening protocols may eventually reveal a more dramatic mortality reduction.  It is important to always discuss the risk of false positives and unnecessary biopsies versus the benefit of early detection of breast cancer. 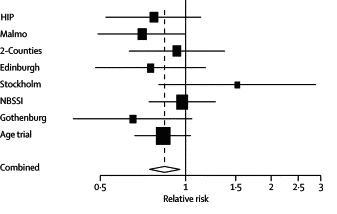