The answer to the mystery quiz is bacillary angiomatosis (BA). BA is a disease that most frequently affects individuals infected with the human immunodeficiency virus (HIV) and typically presents with multiple cutaneous papules and nodules. Visceral manifestations also occur and can involve the bone, lungs, lymph nodes, spleen, liver (termed peliosis hepatis) and the central nervous system.(1) Since the relatively recent first description of the disease in 1983, the two causative organisms, Bartonella quintana and Bartonella henselae, have been identified. The main risk factors for B. henselae infection are contact with flea-infested cats and cat scratches, while those for B. quintana are lice infestation and homelessness. Erythromycin or doxycycline are the first line treatments.(2)

There are multiple clinical forms of cutaneous lesions in bacillary angiomatosis including dermal and subcutaneous nodules. The more common dermal form, present in 60% of patients, is characterized by multiple erythematous nodules/plaques that may be quite friable. An epithelial collarette may develop around some of these lesions. The subcutaneous form, present in approximately 50% of patients, features nodules which are often tender beneath skin that may be normal in color, dusky, or inflamed.(1)

Because it is frequently difficult to distinguish BA from other diseases, particularly Kaposi’s sarcoma (KS) and pyogenic granuloma, by clinical means alone, a biopsy is usually performed to establish the diagnosis. Histologically, biopsies of cutaneous lesions demonstrate lobular proliferation of small blood vessels lined by large endothelial cells. An infiltrate of scattered neutrophils is another important clue to the diagnosis. There may be an epithelial collarette and varying amounts of edema. A silver stain can help to visualize clumps of Bartonella bacteria.(1) A serologic test for Bartonella is available; however, up to 25% of culture-positive patients with advanced acquired immunodeficiency syndrome (AIDS) never develop anti-Bartonella antibodies.(1)

The differential diagnosis of BA includes other vascular lesions, such as pyogenic granulomas and angiomas, and given that the patient has advanced HIV/AIDS, it is particularly important to include KS and atypical mycobacterial infections.

In this case, there are several clinical clues to the diagnosis of BA. The facial lesion demonstrates a typical erythematous nodule surrounded by a collarette which is present in both BA and pyogenic granuloma, but not KS. The lesion is friable, which is characteristic of BA, where a firmer texture is expected in KS.(3) The lesion on the forearm represents a subcutaneous lesion, a finding common in BA and KS and rarely in pyogenic granuloma. Although these three diseases can affect immunocompetent patients, BA and KS have a strong predilection for patients with advanced AIDS. Thus, our patient with a CD4+ T-cell count of 1 cell/cmm has an increased risk of both diseases. Although insufficient sample remained for silver staining, pathology was most consistent with BA. The dramatic response to erythromycin pictured below in both the facial and forearm lesions also strongly supports the diagnosis of BA (Images 1 and 2). 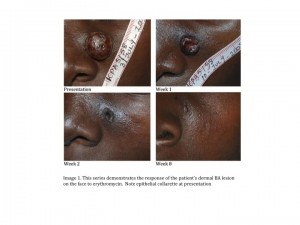 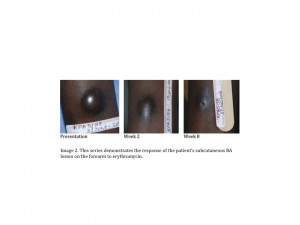 2. Centers for Disease Control and Prevention. Guidelines for Prevention and Treatment of Opportunistic Infections in HIV-Infected Adults and Adolescents. MMWR 2009; 58(No. RR-4):1-203.