The answer to the mystery quiz is pulmonary artery aneurysm. The chest CT shows a very round lesion in the left lower lobe with possible surrounding ground glass opacity. This perfectly round shadow suggests a vascular origin (Image 4, arrow). The apparent vascularity is further suggested by the sequential axial cuts on the CT (Image 5) which show a tubular dilatation (Image 5b) that bifurcates distally (Image 5d & e). This impression was confirmed by subsequent CT with contrast that shows marked enhancement of the lesion (Image 6). Additional coronal views (Image 7, arrow) show how the lobar pulmonary artery gives rise to the aneurysm. Importantly, the distal extension of the vessel shows a continuation of the pulmonary artery (Image 7, arrowhead) denoting a pulmonary artery aneurysm. In contrast, an arterio-venous malformation would have a feeding vessel from the pulmonary artery and an outgoing vessel flowing into the pulmonary venous system. In hindsight, another look at the lateral film reveals the tubular nature of the aneurysm (Image 8, arrows).

Solitary pulmonary artery aneurysms are usually associated with congenital heart disease and pulmonary artery hypertension due to patent ductus arteriosis or any left-to-right intra-cardiac shunt. Most often, they are found in the proximal pulmonary artery, unlike the more peripheral location seen in our case. Other causes include acquired mycotic aneurysms due to bacterial endocarditis or septic thrombophlebitis, collagen vascular diseases, and Behcet’s syndrome. None of the foregoing associations was found in our case. Thus, the origin of the vascular abnormality is unclear.

Planned management included bronchoscopy to identify the origin of the hemoptysis but the patient declined further work-up. It was not clear whether the vascular abnormality was the source of bleeding but the ground glass opacification in the area of the lesion, possibly representing hemorrhage, increased the likelihood that the aneurysm was indeed the source. There are no explicit guidelines for treatment, but lung resection or embolization by IR should be considered. A follow-up chest CT three years later showed the lesion to be stable and the patient reported no further episodes of hemoptysis. 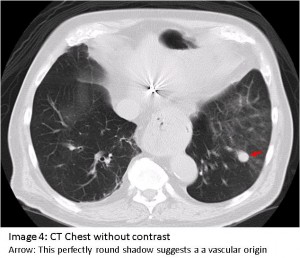 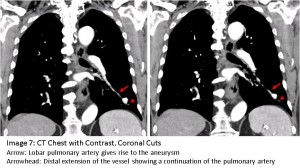 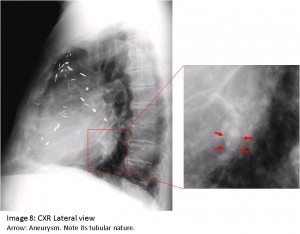