LC is an unusual manifestation of pulmonary metastases. Patients often present with advanced disease and marked tachypnea that may be disproportionate to the abnormality seen on imaging. The most common associated primary tumors are adenocarcinomas arising from breast, stomach, pancreas, prostate and bronchus. Pathogenesis is thought to be due to: (1) hematogenous spread with secondary involvement of pulmonary lymphatics; (2) possible retrograde spread from mediastinal nodes; or (3) antegrade spread to mediastinal nodes from blocked lymphatics.

Our patient remained quite breathless throughout the hospital course, requiring morphine for relief of dyspnea and supplemental oxygen. Pathology revealed tumor cells that had a signet ring morphology filling lymphatics (Image 8). Immunostaining showed expression of cytokeratin 7, CEA, and mucin (Image 9), but not cytokeratin 20, TTF-1, and CD 45. These results pointed to the upper GI tract including the stomach, pancreas, or biliary tree as the primary site of the tumor. Serum alpha-feto protein and prostate specific antigen were not elevated but carcinoembyonic antigen level was quite elevated at 83 ng/ml (ref. range 0-4.5). Upper endoscopy and MRCP were unrevealing. Due to severe respiratory compromise, the patient was unable to undergo colonoscopy, precluding further work-up for a possible GI tumor as well as treatment with chemotherapy. About three weeks after admission, the patient was discharged to a home hospice program. 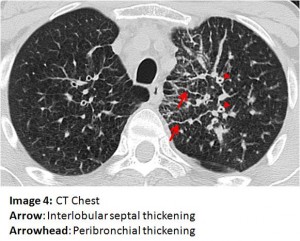 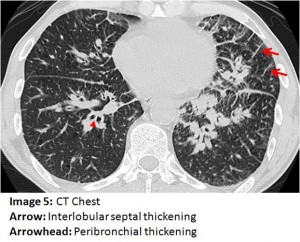 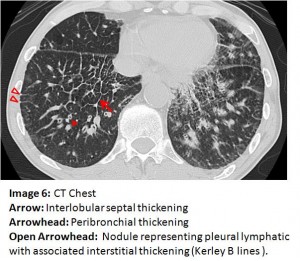 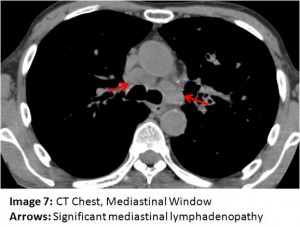 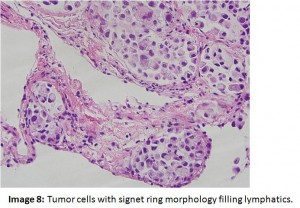 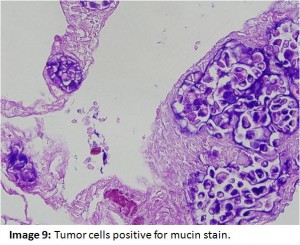