Heme/Onc Mystery Quiz Pulmonary/Critical Care Radiology 2 min read | Twitter | Facebook | Email
Vivian Hayashi MD and Robert Smith MD, Mystery Quiz Section Editors
﻿﻿The answer to the mystery quiz is Kaposi’s sarcoma. The CXR shows bilateral confluent airspaceopacities which have a wide differential diagnosis in this case. The CT narrows the differential.  Specifically, the opacities appear to emanate from the central hilar areas, cuff the airways, and fan out into the more distal airspaces (Images 3 and 4).  This appearance is very suggestive of Kaposi’s sarcoma. CT scans may also reveal mediastinal lymphadenopathy and large pleural effusions which are not present in our case.  The absence of fever and chronicity of one month argue against bacterial pathogens such as pneumococcus and legionella.  Of note, there is an absence of cavitation as seen in necrotizing infections, scant ground glass opacity as found in pneumocystis pneumonia, and an absence of predominant nodularity as might be seen in pulmonary lymphoma.  Kaposi’s sarcoma was the most common neoplastic disease of patients with HIV infection and low CD4 counts early in the AIDS epidemic. It results from an additional infection with HHV-8. Inflammatory pathways involve vascular tissue; pathology typically shows spindle cells sometimes accompanied by blood in the vascular spaces.  Also, the lesions are commonly seen in the large airways as red-to-purple plaques, sometimes spreading throughout all the visualized airways.  There is still debate about whether Kaposi’s sarcoma is truly a neoplasm given the cellular multiclonality that is often reported.  Cutaneous Kaposi’s is by far the most common presentation, and pulmonary involvement is seen in about 30% of cases.  The GI tract is also commonly involved in as many as 40% of cases.  Kaposi’s was seen much more frequently in the 1980s but inexplicably declined in incidence even before the HAART era which further hastened the decline.

Our patient underwent bronchoscopy which revealed red plaques throughout most of the airways .  The transbronchial biopsy showed spindle cells that stained positive for CD 34, a marker of early hematopoietic and vascular-associated tissue.  No pathogens were found on BAL or biopsy. These findings confirmed the diagnosis of Kaposi’s sarcoma.  The patient was treated with ten cycles of liposomal doxorubicin along with HAART.  His recovery was quite dramatic, as can be seen on a CT scan six years after his presentation (Image 5).  The patient also gained weight and increased his CD4 count to nearly 300 cells/cmm. 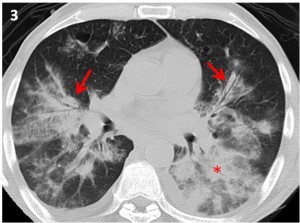 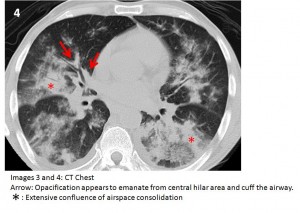 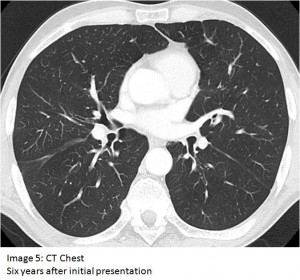