Myths and Realities: The Fishy Truth about Mercury Toxicity 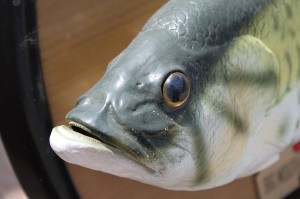 In an age when patients obtain medical news from the media, and celebrities initiate powerful health trends, clinicians have to be prepared to answer even the most obscure questions about health and nutrition. When Entourage star Jeremy Piven took a leave of absence in 2008 from the Broadway play Speed the Plow due to alleged mercury poisoning from eating sushi twice a day for years, it raised the question: How much fish is too much?

Where Does Mercury Come From?

Mercury atoms, like all naturally-occurring elements heavier than iron, were originally produced in supernovas by a process called nucleosynthesis and propelled to Earth from light-years away.[1] Mercury infiltrates the water system through contamination from volcanoes, chlorine production, waste incineration, and electric power plants.[2] Microorganisms convert it into its bioactive form, called methylmercury [3], which accumulates in fish tissues by attaching to the thiol (-SH) group of the amino acid cysteine.[4] Through a process called biomagnification, the largest and longest-living fish accumulate increasing concentrations of mercury by consuming large volumes of prey containing lower concentrations of mercury. Small, short-living species such as salmon, cod and trout have low mercury levels less than 0.1 ppm, compared to large, long-living predators such as shark, swordfish, golden bass, and king mackerel, which have levels greater than 50 ppm.[2] When humans eat fish with high mercury content, it accumulates and can be measured in the blood, hair, and nails.

The brain is a major target of methylmercury, with developing brains being much more susceptible to its damaging effects. In adults, poisoning from industrial pollution, or consumption of 1-2 servings of fish daily for over 10 years, can result in devastating neurological sequelae.[2,5] Symptoms of methylmercury toxicity–distal sensory deficits, memory loss, tunnel vision, ataxia, auditory disturbances, and tremors–were first described in 1865 as a result of fatal laboratory accidents.[6] In the early 1900s methylmercury began being used as a fungicide, and decades later it became widely used in acetaldehyde production. Consequently, methylmercury was deposited in the surrounding environment, leading to multiple large-scale food poisoning incidents. The most well-known incident was the contamination of Japan’s Minimata Bay in the 1950s. Methylmercury waste from a nearby acetaldehyde plant collected in the bay over 30 years, inflicting the surrounding population with the constellation of symptoms later coined “Minimata disease.” The potentially fatal consequences of methylmercury poisoning have been proven over the last century.

However, moderate consumption of seafood, roughly two times per week, does not result in clinically significant symptoms. In fact, the reported favorable neurological effects of docosahexaenoic acid (DHA) and eicosapentaenoic acid (EPA), known as “fish oil,” outweigh the neurological risks of mercury toxicity. In infants, on the other hand, even low levels can lead to mental retardation, cerebellar ataxia, primitive reflexes, dysarthria, and hyperkinesis. The risk of fetal brain damage increases when maternal hair reaches levels greater than 10-20 ppm, but developmental delays have been demonstrated with levels as low as 1.6 ppm.[5] For this reason, the current recommendation is that women of childbearing age, pregnant women, and nursing mothers consume no more that 0.1 microgram/kg/day of mercury, and that they avoid high-mercury seafood altogether.[2]

Extremely high concentrations of mercury have been shown to affect cardiovascular health, increasing the risk of coronary artery disease, myocardial infarction, ischemic heart disease, hypertension, and arrhythmias.[7,8] However, a recent study conducted in two large U.S. cohorts showed no adverse clinical effects from moderate mercury exposure.[9] In fact, the omega-3 fatty acids in seafood provide a cardiovascular benefit that greatly outweighs the risks from mercury exposure. Fish oil has been suggested to be antiarrhythmic and antithrombotic, and it lowers triglycerides, heart rate, and blood pressure.[2] At worst, the overall effect of mercury on cardiovascular health is that it reduces the benefits of fish oil intake. Currently, research suggests that avoiding fish consumption due to confusion regarding the risks and benefits could result in thousands of coronary heart disease deaths annually.[2] The current recommendation is that consumption of 1500-2000 mg of fish oil per week, which is equivalent to one 6-ounce serving per week of wild salmon, decreases coronary heart disease mortality. In patients with coronary heart disease, 1000 mg of fish oil daily is recommended.[2]

Selenium is an element that is present in many foods, including fish. Selenoenzymes protect the brain and endocrine tissues from oxidative damage. Methylmercury binds avidly to selenium and impairs selenoenzyme synthesis. Therefore, the toxic effects of mercury are abated in seafood in which the molar concentration of selenium exceeds that of mercury, such as tuna, anchovies, and mussels.[10]

We are all exposed to mercury via our environment and the food we eat. Cooking or cleaning seafood does not reduce levels of mercury[4], so similar portions of tuna steak, tuna salad, and spicy tuna roll have the same concentration of mercury, assuming they are the same species of tuna. However, unless you are a woman of childbearing age, the fear of mercury toxicity should not interfere with your fish intake. Nonetheless, it is a good idea to be aware of the mercury content of the fish you eat; the National Resources Defense Council has a mercury calculator, which can be found at http://www.nrdc.org/health/effects/mercury/calculator/start.asp.

One comment on “Myths and Realities: The Fishy Truth about Mercury Toxicity”