The answer to the mystery quiz is thymoma associated with myasthenia gravis. The clue to the case is the intermittent dysphagia and chewing difficulty. If one considers myasthenia in the differential, then an otherwise grossly normal appearing chest radiograph may be viewed more closely, with attention directed to the upper, anterior mediastinum. The chest radiograph shows the ascending aorta (image 3, arrow); on the lateral film, the retrosternal space, which normally contains air, appears opacified due to a soft tissue density (image 4, asterisk). The anterior ascending aorta on the lateral chest radiograph is not clearly seen because its border is obliterated by the mass which is in contact with it (image 5, arrow). The aorta also appears enlarged (image 5, arrowhead) which accounts for its prominence as seen on the PA chest radiograph. The mass appears encapsulated but the rough border on its left lateral aspect signifies possible invasion (image 6, arrow). Calcification, reported in 10-41% of patients, is also seen within the mass. Although more common in invasive disease, calcification can also be found in a significant minority of patients with benign disease.

Thymoma is the most common anterior mediastinal neoplasm in adult patients. About half of patients present with an incidental finding on chest imaging while the remaining half present with symptoms, most often muscle weakness associated with myasthenia gravis. This condition characteristically presents with waxing and waning weakness over long periods of time. Less commonly, patients present with other paraneoplastic syndromes such as pure red cell aplasia.

Our patient had an elevated level of acetylcholine receptor antibodies. (1.58, where a level >0.40 is considered positive). The resected specimen showed Type B Thymoma, B1 (lymphocyte-rich, organoid histology, as seen in low and high magnification, image 7 and 8 respectively). In addition, pathology revealed Stage la given the presence of microscopic transcapsular invasion (image 6, arrow). Based on the Masaoka staging classification, the pathology findings confer a predicted five year survival of 86-95%. Due to the presence of capsular invasion, adjuvant radiotherapy was also undertaken for our patient. Overall, there is a continuum of pathology from thymoma to the less common thymic carcinoma, with heterogeneous histology seen. Pathology, however, does correlate with biologic behavior and invasiveness. 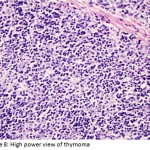 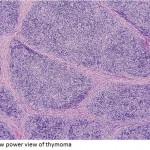 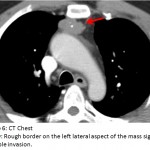 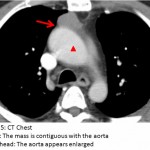 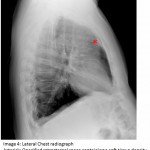 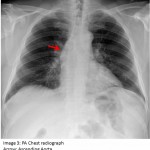