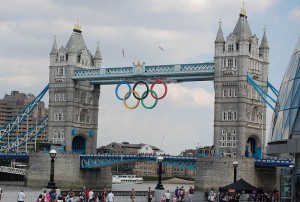 In March 1974, US Department of Defense officials described to author John Finney a “revolution in conventional warfare possibilities brought about by a new generation of ‘smart bombs’…so precise that one shot will destroy a target.”[1] An expected corollary of this new technology (although debatably achieved) was the decrease in military resources that would be required to achieve a particular military objective.

So too are we entering an era characterized increasingly by targeted therapeutics. In the latest issue of Science, Korin and colleagues demonstrated the feasibility of a novel approach that could be used for the targeted delivery of drugs to obstructed blood vessels.[2] Drawing inspiration from natural mechanisms of platelet activation (where increases in shear stress promote rapid adherence to adjacent surfaces of narrowed vessels),[3] the team developed a system of “shear-activated nanotherapeutics” (SA-NTs)–microscale aggregates of smaller nanoparticles that remain intact under physiological flow conditions but break into their components when exposed to high local sheer stress. The authors demonstrated that in a microfluidic model of a 90% lumen occlusion where shear forces increased ~100-fold, component nanoparticle (NP) release from microparticle aggregates was increased ~15-fold by the obstruction (p <0.005) and that component NPs were ~7 times more likely to be localized in endothelial cells distal (as compared to proximal) to the obstruction (p < 0.005). Subsequently, the authors demonstrated that SA-NTs carrying 50 ng of tissue plasminogen activator (tPA) localized to the area of occlusion significantly prolonged the time to complete occlusion in ferric chloride-injured murine mesenteric arteries ( ~30 minutes vs ~10 minutes in controls, p < 0.0005). Other highlights of the paper included SA-NT delivery of tPA to vascular emboli in an in vitro murine model of pulmonary embolism, where tPA-equipped SA-NTs normalized pulmonary artery hypertension within 1 hour of emboli delivery, compared to the same concentration of free tPA (50 ng/ml) or a 10-fold-higher dose (500 ng/ml) of free tPA that were both ineffective (p < 0.005). Only a 100-times-higher dose of free tPA produced similar results! The major implication of these data is the significant (~100-fold) reduction in drug dose required for effective thrombolysis, which would substantially enhance the safety of thrombolytic therapies. I look forward to seeing clinical trials of similar modalities.

Moving to the realm of rheumatology, in the latest issue of the New England Journal of Medicine, Fleischmann and colleagues report a clinical trial of tofacitinib, a novel Janus kinase inhibitor and potential disease-modifying therapy for rheumatoid arthritis.[4] By inhibiting JAK1 and JAK3, tofacitinib blocks signaling for multiple interleukins (2, 4, 7, 9, 15, and 21) that modulate lymphocyte function.[5] In this phase 3, double blind, placebo-controlled study, 4 groups were examined: 2 doses of drug for the entire 6-month study, as well as placebo for 3 months followed by 3 months of each of the 2 same doses. Three primary endpoints were assessed, all previously-defined rheumatologic scales that are composites of subjective symptoms, clinical findings, and inflammatory markers. At month 3, a higher percentage of patients in each of the experimental groups manifested a 20% improvement in American College of Rheumatology score (59.8% in the low-dose, 65.7% in the high dose vs 26.7% in the combined placebo groups, p < 0.001). Additionally, improvements from baseline in the Health Assessment Questionnaire–Disability Index were ~2.5 times greater in the experimental groups (p < 0.001). The percentage of patients with Disease Activity Scores based on the erythrocyte sedimentation rate indicating less severe disease activity were similar in experimental and control groups. Tofacitinib treatment was also associated with dose-dependent elevations in LDL-cholesterol and reductions in neutrophil counts, with 6 serious infections developing in the tofacitinib group. It is possible that tofacitinib may be the new oral weapon in our armamentarium of treatments for rheumatoid arthritis, and we will keep you updated.

Jumping now to the world of vascular biology, the last week was momentous with regard to our understanding of the role of statin therapy for the primary prevention of major vascular events in low-risk individuals. In the latest issue of The Lancet, the Cholesterol Treatment Trialists’ Collaborators published a meta-analysis of data spanning 27 clinical trials and including nearly 165,000 individuals [6]: participants were separated into 5 quintiles of baseline 5-year major vascular event risk prior to initiation of statin therapy. Rate ratio per 1.0 mmol/L (=38.7 mg/dL) LDL reduction was evaluated. Incredibly, statin-mediated reduction of serum LDL coincided with reduction in the risk of major vascular events (RR 0.79, 95% CI 0.77-0.81, per 1.0 mmol/L reduction) regardless of age, sex, baseline LDL, or previous vascular disease! Furthermore, the proportional reduction in major vascular events was as big in the 2 lowest-risk quintiles as in the highest risk quintiles. It looks like there may be some changes coming with the (long-awaited) Adult Treatment Program 4!

Before we add atorvastatin to the water supply, however, consider the latest work by Ridker and colleagues examining a potentially causative link between rosuvastatin and diabetes, also from the latest issue of The Lancet.[7] This analysis of data from the JUPITER trial [8] stratified participants based on major risk factors for developing diabetes (metabolic syndrome, impaired fasting glucose, body-mass index ?30, hemoglobin A1c >6%) and then examined incident diabetes as well as the primary endpoint (myocardial infarction, stroke, hospital admission for unstable angina, arterial revascularization, or cardiovascular death) with rosuvastatin 20 mg or placebo. In individuals with one or more risk factors for diabetes, rosuvastatin therapy was associated with a reduction in primary endpoint (HR 0.61, 95% CI 0.47-0.79, p=0.0001) and an increase in incident diabetes (HR 1.28, 95% CI 1.07-1.54, p=0.01); roughly 2.5 vascular events or deaths were avoided for every new case of diabetes diagnosed. For participants without major risk factors for diabetes, rosuvastatin treatment resulted in a similar reduction in the primary endpoint (HR 0.48, 95% CI 0.33-0.68, p=0.0001) without an increase in diabetes. From these data it would seem that although the cardiovascular benefit of rosuvastatin exceeds the associated risk of diabetes, even in high-risk individuals, one should prescribe this and similar medications with care.