The patient is a 55 year old African American male with a 60 pack year history of tobacco use and AIDS,who presented with 1 month of intermittent fevers and weight loss. His most recent CD4 count and viral load were 2/cmm and 50,623 copies/mL, respectively. Prior opportunistic infections included pneumocystis pneumonia and thrush. He was previously homeless, but currently resides in a Single Room Occupancy Housing. Upon presentation he complained of occasional night sweats, but no shortness of breath, cough, sputum production, or hemoptysis. Vital signs were notable for a fever of101.5F, but the patient was otherwise normotensive with a room air saturation of 98%. On physical examination he appeared cachectic and the lung fields were clear. Labs showed a WBC count of 3.6k/cmm with 47% neutrophils and 13% bands, and an LDH of 364 U/L. 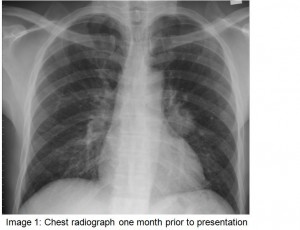 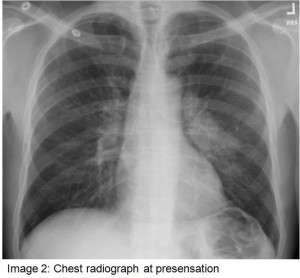 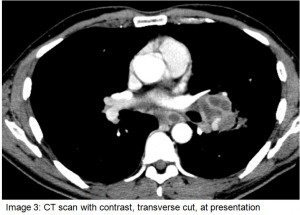