An Evaluation of Basic Running Techniques: A Guide for Health Practitioners and the Novice Runner

Running injuries are common, afflicting greater than two-thirds of frequent runners each year[1]. Despite the abundance of available resources, there are no clear guidelines to extend to patients on the subject of proper running technique in order to avoid repeat or worsening injuries. Though specialized intervention may be in order for more severe cases, novice runners and those who have not been active in the sport for some time may benefit from basic instructional advice. The purpose of this article is to provide clinicians with a first line intervention for such patients in order to minimize injuries and improve results.

Starting at the beginning

At its most basic, runners have 2 options when it comes to placing one foot ahead of the other:

1. The forefoot/midfoot strike (FFS) – impacting the ground on one’s toes or the balls of one’s feet (Figure 1c).

2. The rear foot/heel strike (RFS) – extending one’s heel to meet the ground first, and rolling forward onto the toes (Figure 1a and 1b). 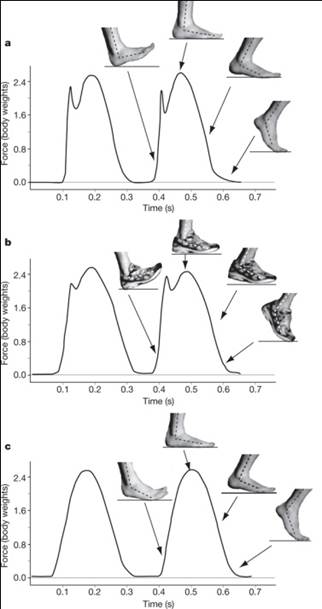 This figure, borrowed from Lieberman et. al. in Nature 2010 (as per Nature Publishing Group’s licensing policy for educational material), compares rear foot (1a, 1b) and fore foot (1c) strike methods as well as the force generated by each. Notice the impact transient generated by barefoot rear foot striking (1a), which is reduced when wearing shoes (1b). No impact transient is generated with fore foot striking (1c).

The primary differences between these two approaches are the force of the impact, the transference of energy, and the duration of ground contact. In each of these categories, FFS is superior to RFS[2-5]. Ardigo et. al. compared speed, step frequency, step length and oxygen consumption in 8 active male runners using either FFS or RFS[2], Hayes et. al. evaluated by video 181 runners in competition[4],and Cavanagh et. al. and Lieberman et. al. performed biomechanical comparisons of the two techniques[3,5]. In short summation, when the heel hits the ground first, there is a brake-like effect, and a greater collision and contact time between the leg and the ground. Alternatively, a forefoot impact induces a more rounded and rolling motion, reducing recoil from hitting the ground as well as actual ground contact time, and thus friction. An important caveat for this comparison is that, at slower speeds, FFS is less biomechanically fluid and efficient than RFS[2]. This may induce novice runners to prefer RFS, as it is initially less exhausting and more similar to the familiar motion of walking. No large, randomized studies have been performed comparing injury rates in these two foot strike methods. However, in the (?observational?) studies available, FFS was shown to be associated with a significantly lower injury rate, improved performance, and reversal of chronic running injuries compared to RFS[6-8]. Cheung et. al. and Diebal et. al. performed case studies of 3 runners and 10 runners, respectively, with overuse injuries, converting them from RFS to FFS, and found a resulting decrease in symptoms[6,8]; Daoud et. al. retrospectively compared injury rates of 52 runners based on foot strike patterns and found twice the rate of stress injuries in RFS runners[7].

If the shoe fits

Runners face an overwhelming variety of shoe options, more so recently with the burgeoning minimalist/barefoot running movement. Large scale comparative studies between shoe types (and no shoes at all) are lacking. Yet, consistent trends are evident. A recent study by Franz et. al. comparing 12 male runners demonstrated that increased shoe weight led to increased oxygen demand; it also showed that shod runners had reduced oxygen demand compared to barefoot runners[9]. Taken on its own, this study would suggest a clear benefit for using lightweight running shoes. However, several biomechanical studies have been put forth espousing the benefits of minimalist footwear (e.g. Vibram FiveFingers, Nike Free) and barefoot running, particularly in their tendency to force the runner to adapt to FFS technique[5,10]. Simply put, heavily cushioned shoes are more forgiving to foot strike variations (Figure 1a and 1b), preventing immediate impact injuries, but doing nothing to reduce the more gradual injuries associated with RFS, such as medial stress syndrome (shin splints) and plantar fasciitis[11,12]. Runners converting to barefoot/minimalist style should take caution to avoid starting out running distances comparable to those they were running in cushioned shoes as intrinsic foot muscles and secondary muscle groups (especially the gastrocnemii) will require strengthening and conditioning, and the sudden transition could lead to new stress injuries[13].

Though there is no single correct method of running, several elements appear to be universal. Reduced stride length and increased stride frequency are associated with fewer injuries and less oxygen demand than overextended and overemphasized strides[14,15]. Arm swinging – specified as alternating forward extension of the arm when the ipsilateral leg is extending backwards – is also associated with decreased oxygen demand. Finally, maintaining one’s back straight allows for greater lung capacity than hunching forward[16]. Of note, all of these characteristics are central to barefoot running techniques (e.g. POSE method, Chi running and 100-up). These techniques may be worth exploring for specific style suggestions, but no comparative studies have ever been conducted regarding their perceived benefits of injury reduction and performance improvement.

From this author’s own experience, uphill running requires inherent stride and step modifications that best reflect proper form for injury avoidance and improved performance (shorter stride, FFS, straight back) and may offer inexperienced runners a way of identifying specific mechanical aspects to improve upon. Furthermore, a focus on rapid hip flexion with a forward lean, as opposed to generating force from a rearward push, allows for core muscles to generate most of the power of running, instead of relying on ground impact to do the same (with the resulting stresses of such impact) (Multimedia 1).

This video is presented by Dr. Mark Cucuzzella, Director of the Natural Running Center, located in West Virginia. The featured runner is barefoot to illustrate recommended foot and leg placement, but also to demonstrate the viability of barefoot running itself. Notice the impact pattern of the runner’s feet. At 3:27, the runner is demonstrating the drill central to the 100-up method, with its emphasis on hip flexion rather than rearward pushing; combined with a forward lean, this motion generates movement with comparably reduced ground impact. Towards the end of the piece, Dr. Cucuzezella points out the mechanical differences between forefoot striking and rear foot striking.

For all its simplicity, running carries a shockingly high rate of injury. Yet as sedentary lifestyle-associated morbidities rise worldwide, health professionals would do well to stress the benefits of aerobic exercise – especially running – due to it accessibility and recreational value. The techniques evaluated in this paper are intended to guide the clinical practitioner in reducing commonly seen running injuries so that more people can run farther for a longer frame of time in their lives and receive all the subsequent health benefits therein implied.

Running is an excellent and inexpensive form of exercise, but many providers who are not themselves runners feel uncomfortable recommending it to patients given the high rate of injury. This article offers a nice outline for providers to begin thinking about running: form, shoes and styles. The embedded video gives a provider a nice overview of the biomechanics of running. Each runner is different, and injuries may happen, but it is an excellent form of exercise and this article offers providers a place to start discussing it with their patients. –Richard E. Greene, MD

One comment on “An Evaluation of Basic Running Techniques: A Guide for Health Practitioners and the Novice Runner”