To Stent or not to Stent? A Review of the Evidence on the Utility of Stenting in Renal Artery Stenosis 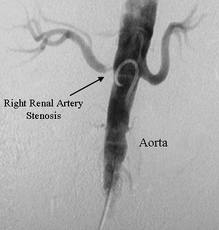 Renovascular hypertension, often caused by renal artery stenosis (RAS) due to atherosclerosis or fibromuscular dysplasia, is the most common potentially correctable cause of secondary hypertension. Although only approximately one percent of patients with hypertension have atherosclerotic renovascular disease (ARVD), the prevalence increases to 30-40% in patients with CAD, CHF, and PVD. Screening studies of asymptomatic populations in the United States demonstrate a disease prevalence of 7%, with an annual incidence of 0.5% per year in analyses of medical claims of asymptomatic patients over age 65 [1]. Moreover, ARVD has been found to significantly increase cardiovascular morbidity and mortality; in a recent randomized controlled trial, annual mortality was 8% in patients with ARVD as compared with 3.7% in the general population [1]. As such, this article will focus on management of RAS due to atherosclerosis in particular.

Currently there are three treatment options: (1) medical therapy, consisting of statins, anti-platelet agents, and blood pressure control with renin-angiotensin blockade; (2) percutaneous transluminal renal angioplasty with stent placement (PTRAS); and (3) surgical revascularization. Testing for ARVD is not without risk, especially in those with impaired kidney function. Additionally, procedures to correct RAS are associated with morbidity and mortality, including renal artery dissection, thrombosis, or perforation, acute kidney injury, and death. According to the 2005 American College of Cardiology/American Heart Association guidelines [2], then, testing for RAS is indicated only in those with a suggestive history and in whom a corrective procedure will be performed if ARVD is detected. Therein lies the major question: is stenting worthwhile in the treatment of RAS? More specifically, does percutaneous angioplasty deliver improvements in blood pressure control, renal disease, and cardiovascular outcomes that cannot be obtained by medication alone?

Although many studies have attempted to answer these questions, the findings thus far are unsettling. Upon review of the relevant research, a wide discrepancy emerges between the outcomes from observational data versus those obtained from randomized controlled trials. Observational data have demonstrated a clear benefit from stenting in patients with ARVD. Grey et al [3] found a significant decrease in blood pressure, serum creatinine, New York Heart Association functional class, and number of annual hospitalizations for heart failure in 39 patients who had undergone PTRAS for refractory heart failure. Similarly, Kalra [4] reported significantly lower rates of mortality and renal disease progression in 89 patients treated with PTRAS in comparison with 346 patients treated with medical therapy alone. Additionally, systematic reviews of multiple observational cohort studies have consistently found that PTRAS is associated with improvement in blood pressure and kidney function [5].

Yet these impressive positive effects have failed to withstand more rigorous investigation. The three earliest RCTs from 1998 to 2000 [6,7,8] failed to show improvement in blood pressure with procedural intervention as compared with medical therapy alone. It should be noted that the external validity of these studies is limited. In these trials, balloon angioplasty was performed without stent placement, a practice that has since been associated with worse angiographic outcomes and higher rates of re-stenosis, and one which is therefore no longer standard of care. Additionally, these studies have been criticized for their small sample sizes, short follow up times, high cross-over rates, and inclusion of patients with clinically insignificant stenosis.

Despite the limitations of these earliest RCTs, their findings – namely a lack of benefit with stenting as compared with medical therapy- appear to be validated in subsequent RCTs and meta-analyses. The STAR trial [9] enrolled 140 patients with RAS >50% and renal insufficiency and found that PTRAS did not improve creatinine clearance or secondary endpoints of cardiovascular morbidity and mortality. In the largest trial to date, ASTRAL [10], 806 patients with RAS >50% were randomized to PTRAS versus medical therapy alone. Not only did stenting fail to demonstrate benefit in terms of the primary endpoint of loss of renal function and secondary endpoints of blood pressure, cardiovascular events, and all-cause mortality, but also the rate of serious adverse events with stenting was 6.8%. Unsurprisingly then, a meta-analyses by Kumbhani et al [11] of the various RCTs failed to demonstrate any difference between PTRAS and drug therapy in terms of blood pressure control, renal function, all cause mortality, heart failure, and stroke. Additional meta-analysis by Pierdeomenico et al [12] also failed to show any difference in the risk of future nonfatal myocardial infarction.

However, neither one of the above RCTs is above reproach, specifically with regards to patient selection. Approximately 28% of patients randomized to PTRAS in the STAR trial [9] did not get stented because they were noted to have insignificant (less than 50%) stenosis when angiogram for stent placement was performed. And in the ASTRAL trial [10], patients were included only if their primary treating physician was uncertain whether the patient would definitely benefit from revascularization, thereby likely excluding high-risk patients.

So what conclusions can we draw? Well, here are my parting thoughts:

1. Most patients should be managed with drug therapy alone. The preponderance of the most rigorous type of evidence from RCTs clearly demonstrates the risk of harm without clear demonstrable benefit from revascularization.

2. More research is needed on the utility of revascularization in high-risk patients. It is possible that the discrepancy between outcomes in the observational trials and RCTs is due to the fact that high-risk patients derive benefit from PTRAS whereas low to moderate risk patients or patients with incidental finding of RAS on imaging, the majority of patients studied, do not.

The ongoing CORAL trial [13] – whose results are due imminently – should shed some light on these issues. This prospective, multicenter, un-blinded randomized controlled trial aims to determine the incremental value of stent revascularization in addition to optimal medical therapy. Potential subjects all underwent renal angiogram and were included in the study if they had atherosclerotic renal stenosis >80% or >60% with a 20mmHg systolic pressure gradient as well as systolic hypertension of at least 155 on a minimum of two anti-hypertensive agents. 1,080 subjects were randomized with a 90% power to detect a 28% reduction in the composite endpoint of cardiovascular or renal death, MI, hospitalization for CHF, stroke, doubling of creatinine, and need for renal replacement therapy. The results of this study are expected to provide more definitive guidance, so stay tuned.

3. Current AHA/ACC guidelines [2] suggest that revascularization be considered only in those with a high likelihood of benefit from undergoing stenting, namely those with short duration of blood pressure elevation prior to diagnosis of ARVD, failure of optimal medical therapy to control blood pressure, intolerance to optimal medical therapy, and recurrent flash pulmonary edema and/or refractory heart failure.