The answer to the Mystery Quiz is diaphragmatic hernia, specifically a Bochdalek hernia. The CXR shows increased density behind the heart that has a smooth superior border (Image 2, arrows). This density does not obscure the left heart border, denoting a posterior location behind the heart. Furthermore, the lateral aspect of the opacity demonstrates low attenuation (hypo-dense) suggesting the presence of fat (Image 2, asterisk). The left hemidiaphragm is not visible indicating that the abnormality is contiguous with the diaphragm. The lateral film confirms the posterior location of the opacity and again shows its smooth contour (Image 3, asterisk). A Chest CT shows the opacity to indeed be fat, measuring -117 Hounsfield Units (image 4, asterisk).

Bochdalek hernias arise through a congenital diaphragmatic defect, most often at the posterior-lateral aspect of the left hemidiaphragm. The frequency is about 1 in 2500 births with a male predominance. A presentation at birth often results in respiratory failure due to herniation of subdiaphragmatic contents that acts as an intrathoracic space-occupying mass. Lung development may be interrupted in utero resulting in pulmonary hypoplasia. Often, surgical resection is required. In adults, however, it is rare for patients to experience symptoms and the presence of a Bochdalek hernia is often noted incidentally. Recognition of its presence should obviate additional follow-up or evaluation.

In our case, the patient was diagnosed with a right lower extremity cellulitis, deep venous thrombosis was excluded, and antibiotic administration resulted in resolution of the infection. The radiographic finding was purely incidental. 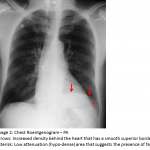 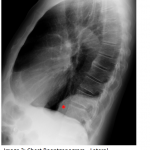 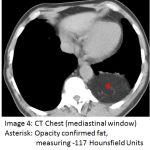