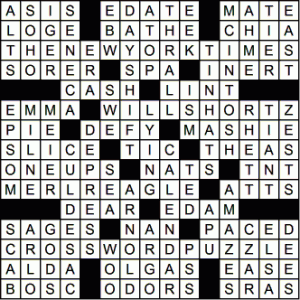 The 2008 US Census Bureau reported that 14 to 16 percent of the adult population enjoyed crossword puzzles and that half of them played crossword puzzles at least twice a week. [1] Wouldn’t it be wonderful if all those hours spent finishing the Sunday crossword puzzle were good for your health? Recent evidence shows that this may be the case. By 2030 the US population over 65 will double to more than 70 million, highlighting the need to investigate whether non-pharmacological interventions such as crossword puzzles may delay the onset of dementia.[2] The puzzles would serve as a form of cognitive training in which repeated tasks with an inherent problem aim to improve a specific aspect of cognition such as memory, reasoning, and speed processing.[2] By improving brain function, one would ideally create a “cognitive reserve” that would delay the clinical onset of dementia by years even though brain pathology in the form of Lewy bodies, neurofibrillary tangles of hyperphosphorylated tau protein, and β-amyloid plaques may be increasing.[2, 4, 5]

In an observational study by Pillai et al., 488 community dwelling elderly volunteers without evidence of cognitive impairment at baseline underwent cognitive assessment testing their delayed free recall and cognition every 12 to 18 months as part of the Bronx Aging Study. Pillai et al. identified 101 participants who subsequently developed dementia and analyzed the self-reported frequency of participation in crossword puzzles. They found that any amount of crossword puzzle activity delayed the onset of accelerated memory decline by 2.54 years. However, once begun, crossword puzzle users were subject to a steeper rate of memory decline than non-users. These findings support the theory that cognitive reserve delays the onset of dementia up to a certain point, after which the brain’s ability to compensate is overcome, resulting in the steeper decline in memory.[1, 4]

Seven other randomized controlled trials have found a beneficial effect of cognitive exercise on mental activity, with four reaching statistical significance.[6] For example, Mahncke et al. divided 162 elderly participants into three groups, with the experimental group receiving computer based training on six tasks including speed of processing, word recognition, digit span, and working memory for 40 one hour sessions over ten weeks.[11] The two control groups received either active contact with computers or no contact with computers. Mahncke et al. found a significant improvement in the speed of processing between pre-training and post-training performance, with a difference of 176 ±32milliseconds (P‹0.001).[11] Global auditory memory score also improved, as measured by the Repeatable Battery for the Assessment of Neuropsychological Status (RBANS), with an increase of 2.3 summed standard score points in the experimental group (P=0.019).[11] Importantly, they were able to show that improvements in digit span persisted after 3 months of a no contact period (P=0.044 immediately post-training and P=0.034 three months after training).[11] Upon closer inspection, however, each of the seven randomized control studies tested different combinations of brain function areas such as general knowledge, memory, reasoning, and speed processing, making it difficult to form generalized guidelines for conducting cognitive therapy. [6]

Does cognitive exercise in one area translate to improvement in other areas of cognition, especially everyday functioning such as instrumental activities of daily living (IADLS)?

Is this something grandpa can do at home?

Traditional cognitive training programs tend to be comprised of expensive group sessions in the realm of $100 for one occupational therapy session. Often, the targeted audience may not be able to make it to the session, such as elderly individuals who lack access to public transportation or live in a nursing home. The emergence of computer based cognitive therapy may offer a cheaper, more accessible and exciting alternative.[3, 5, 10] Computer based products are currently a $300 million worldwide industry and is estimated to achieve between $2 and $8 billion by 2015.[10] Kueider et al. performed a systematic review of computerized cognitive training studies including classic cognitive training programs, neuropsychological software, and video games. They also evaluated whether these interventions actually affect cognitive outcome measures in global and domain specific areas. Classic cognitive training appeared to have the greatest benefit on working memory, executive function, and processing speed while neuropsychological software was most able to improve memory and visual spatial ability. Video and computer games included Nintendo Wii’s Big Brain Academy, Microsoft’s Rise of Nations, Medal of Honor, and classic video games such as Pac Man, Donkey-Kong, and Tetris. They had their largest effect on enhancing reaction time, processing speed, executive function, and global cognition in older adults. Additionally, the magnitude of cognitive functioning improvement between computer based and classic cognitive training was similar, showing that either is a viable option for older adults.[3, 10] Despite initial reservations by elderly participants about unfamiliar technology, most adjusted to the new media and stated that it may even help them connect with their grandchildren.[10]

What is the optimal dosing and duration of cognitive therapy?

Review of the current literature reveals studies that differ based on cognitive therapies used, duration of therapy, and longitudinal follow up. The best estimate was ventured in the meta-analysis by Valenzuela, where a “dose” of cognitive therapy lasting two to three months may have effects on healthy community dwelling elderly for years with a relative improvement of 1.2/2.6 points on the mini mental state examination (MMSE).[6] Future trials need to focus on larger sample sizes, randomization, and longer follow up periods to detect lasting effects on cognition.[6]

Leisure activities such as crossword puzzles, card games, and reading provide an avenue to stimulate the mind thus delaying the onset of dementia with relatively few negative consequences. These activities should be recommended to our healthy elderly patients. In the future, targeted computerized cognitive training in the form of video games may accompany a daily aspirin in our armamentarium as we strive to prevent disease.