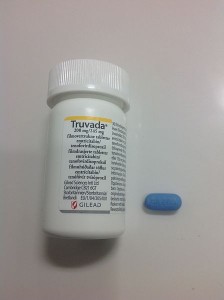 In July of 2012, the FDA approved the use of Tenofovir-Emtricitabine (Truvada, a single blue pill) daily as Pre-Exposure Prophylaxis (PrEP) in men with persistent risk for contracting HIV infection. The idea of PrEP has ignited a firestorm of concern among healthcare providers about how, when and in whom to use PrEP, if at all. Indeed, some believe that PrEP will usher in a new era of drug resistant new infections with HIV, or encourage men on prep to have frequent sex without condoms and develop new infections with syphilis or super-resistant strains of gonorrhea. For better or worse, increasing rates of syphilis and gonorrhea tell us that many gay men are already having sex without condoms (a.k.a. barebacking), and unfortunately, they generally aren’t talking to their health care providers about it.

Gay and bisexual men came to the attention of the medical industrial complex in force in the mid-1980’’s when they began dying of AIDS. The unknown killer, then called Gay Related Immunodeficiency (GRID), was linked to high numbers of sexual partners. Gay men were told by health care providers and community activists to stop having sex, or if they were going to have sex, they should only ever have it while using condoms. In that instant in history, the culture of gay male sex was changed. Previously, there was some risk of sexually transmitted infections, but these were either treatable, like gonorrhea, chlamydia or syphilis, or relatively harmless over the long-term, like herpes. Since there was no risk of pregnancy from gay sex, it was rare that gay men thought about using condoms, and for the most part gay men without other chronic health issues avoided seeking regular medical care outside of STI clinics where one could remain relatively anonymous.

Given the devastation caused by AIDS and the inconceivable number of men who died in a very short time, the gay community largely complied with condom use. The public health campaign was not unlike that used in selling seatbelts to the public. Click it or you’ll die. Wrap it up or you’ll die. Not a very sexy message, but it was necessary and early in the intervention, thought by the gay community to be a temporary stay of execution until the cure for AIDS could be found. And it was effective–not 100% effective, as we know that condoms, even with “perfect use” are not 100% effective, but rates of new infections decreased precipitously. (3)

Now, however, we are 30 years into the HIV epidemic, and providers have a simple message for gay men. Use condoms or you’ll die. But both the medical community, when pressed, and the gay community, when asked, know that this message is not the complete picture. Gay men (like straight women who started using the birth control pill before them) want to be having sex without condoms. Some want it with their long term partners, and some with casual partners. Some find it hard to maintain erections when using condoms, particularly as they get older. Some are even looking for intimacy with partners either casual or ongoing, and feel that condoms create a literal, physical barrier to this intimacy. Some have eroticized the transfer of semen as part of a complete sex act. For whatever the reason, a portion of the gay community want to be having sex without condoms and many have already started doing this.

The problem comes in that gay men are not talking to their healthcare providers about their desire for condomless sex (or even their current having of condomless sex). We know that only one in three gay men even comes out to their healthcare provider. (4) Why would they? The message healthcare providers are trained to give is “all condoms all the time”. From a technical standpoint, this message is justified. There are a lot of medical reasons to fear unchecked casual sex when using PrEP. The possibility of increased rates of syphilis, drug-resistant gonorrhea, lymphogranuloma venereum and increased rates of anal cancers from increased HPV transmission are all quite real.

The answer seems cut and dry, gay men SHOULD use condoms all the time. Then they won’t NEED PrEP. But the truth is more insidious. Health care providers are trained to give birth control to young women when they become sexually active. It is used as a teachable moment, to educate about the potential STI’s one might contract, teach about condom use and screen for relevant STI’s. Talking sex with young patients can be awkward, but providers do it. However, many providers seem stuck when it comes to gay male sex in a way that goes deeper than the medical issue. Perhaps there is still something “icky” about anal sex to heterosexual providers? Gay male doctors may feel shame in front of their medical colleagues admitting how much sex gay men have. Maybe there’s a number of sex partners that healthcare providers feel is too many and tips the scale away from healthy to become unnecessarily indulgent or amoral? Perhaps it is simply that primary care providers have too little time to do the screening and counseling that is needed and there is a lack of practice having the risk reduction conversations needed around gay sex.

PrEP is bringing a lot of these ideas to light On the surface, it is a good solid intervention: chemoprophylaxis against HIV. The data from the iPrex study (5) is solid, up to 90% reduction in new infections in men who took the medication. Compliance was a clear issue in the trial, but when men took it, it worked. It also required men to have contact with health providers every three months. They were not told to take the pill and do nothing else to prevent disease prevention. Similar to the oral contraceptive pill in young women, the visits were seen as an opportunity to do prevention and education. The gay men in the study were instructed to use condoms and screened for STI’s at each visit. The CDC recommends for people with significant risk of STIs, screening be done every three months. (6) Here is an opportunity to bring these men into care and do some of the harm reduction counseling that is the cornerstone of primary care medicine.

This does not mean there will not be setbacks. Could gay men stop using condoms more often because they take PrEP? Yes, it is possible. It is also possible, with increased exposure to their primary health providers, they can make better choices about how and when to use condoms. Might we see a Truvada resistant strain of HIV if PrEP is used as the only means of prophylaxis in lieu of condoms? It is certainly possible, although the likelihood is debatable. Increased rate of transmission of other STI’s? Possible. But whether we like it or not, gay men are having condomless sex. We need to decide how we’re going to work with the community and manage the risk.

PrEP is not for everyone, certainly not for every gay and bisexual male patient. In accordance with the CDC Interim Guidelines for the use of PrEP state (7), for patients in serodiscordant (or magnetic) relationships or men at persistently high risk of becoming infected with HIV, PrEP is a new and valuable tool in our toolbox of prevention. It behooves us to use it wisely and consider having the harm reduction conversations that go with it to welcome and engage HIV negative gay and bisexual men to come talk with their healthcare providers about the sex they are actually having and the risk and benefits of this powerful new tool. A conversation that is deeper than “here, have some condoms!” or “wrap it up or you will die.”

The number of new HIV infections in the United States has remained stable since the mid 1990s. Safe sex education has clearly not been fully effective. Men who have sex with men (MSM), particularly young Black and Latino MSM (aged 13 to 24), account for the majority of new infections [1]. There is an urgent need to prioritize prevention measures as well as earlier diagnosis, linkage to and retention in care.Tenofovir-emtricitabine aka the new little blue pill is an important part of the arsenal to reduce the risk of HIV infection in high risk MSM that includes safer sex practices and regular HIV testing.