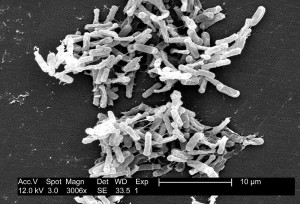 Antibiotic associated diarrhea is a common complication of antibiotic therapy, occurring in 5% to 39% of all patients receiving treatment. Nearly one third of these cases are attributed to the gram –positive spore forming rod, Clostridium difficile [1]. A primary Clostridium difficile associated diarrhea (CDAD) is estimated to add $2871 to $4846 to in hospital costs while a recurrent infection is estimated to cost $13,655 to $18,067 [2]. The emergence of the hyper-virulent NAP1/B1/027 strain of C. difficile together with the rising burden of disease and its associated costs have fueled research into mechanisms by which CDAD may be prevented [3]. In addition to advocating for judicious use of antibiotics in all patients, another novel therapy for CDAD is fecal transplant, which has shown dramatic results in patients with recurrent infection [3]. This therapy requires donor stool from a healthy family member to be screened for pathogens, mixed with sterile saline, and transferred to a patient via nasogastric tube, colonoscopy, or retention enema [3]. The aim of fecal transplant is to restore balance to the intestinal microbiome by providing healthy gut flora that previously were disrupted by antibiotic therapy 3]. Preparations of live nonpathogenic bacteria taken orally in the form of “probiotic” supplements (probiotics) are hypothesized to work in a similar way [3]. Given possible reluctance of patients to undergo fecal transplantation, renewed interest has developed in the use of probiotics as a cheap, oral, readily available therapy in preventing CDAD.

C. difficile infection may result in a range of clinical presentations in the host; from asymptomatic intestinal colonization, to diarrhea, colitis, and the feared complications of pseudomembrane formation, toxic megacolon, and death [4]. CDAD often involves at least three loose or watery stools daily for three days and may occur while taking antibiotics or up to eight weeks afterwards [1]. Risk factors are numerous, and include hospitalization, age greater than 65, multiple comorbidities, immunosuppression, exposure to radiation, chemotherapy, inflammatory bowel disease, cirrhosis, proton pump inhibitors, prior history of CDAD, broad spectrum antibiotics, and the duration of antibiotic therapy [3]. Patients with the above characteristics may benefit from prophylaxis with probiotics to prevent CDAD prior to undergoing antibiotic therapy for any reason, including pneumonia, urinary tract infections, and surgical procedures.

In order to be effective, probiotics must survive exposure to gastric acid from the stomach, digestive enzymes from the pancreas, and bile acids from the liver. They must arrive at the colon, find a place to attach to the epithelium, and proliferate [3]. The most commonly evaluated and commercially available probiotic is Lactobacillus GG. It “produces an inhibitory substance which has activity against many bacterial species, including anaerobic bacteria” [3]. Saccharomyces boulardii is another common probiotic which, as a yeast species, is resistant to antibacterials. They have been shown to destroy the A and B toxin of C. difficile as well as block toxin receptor sites [3]. Other probiotics include Bifidobacterium, Streptococcus, and Enterococcus species [4].

In 2012, Johnston et al. conducted a systematic review and meta-analysis of twenty randomized controlled trials of participants aged 5 to 74 years who were on antibiotics and received a probiotic, placebo, or no treatment control. Participants were followed for a range of 7 days to 3 months. Johnston et al. found that diarrhea secondary to C. difficile occurred in 2% of patients receiving probiotics compared to 5.9% of controls, with a relative risk reduction (RRR) of 66% (95% confidence interval 51 to 76) [4] and number needed to treat (NNT) of 26 patients to prevent one case of CDAD. Additionally, adverse events including abdominal cramping, nausea, fever, soft stools, flatulence, and taste disturbance occurred in only 10% of patients receiving probiotics compared with 13% of patient controls, with a RRR of 18% (95% confidence interval -5 to 35) [4].

Although previous studies have found that probiotics are relatively safe, there have been case reports citing probiotics as a rare cause of sepsis and endocarditis [6]. Major risk factors for probiotic associated infections include immunosuppression (e.g. human immunodeficiency virus, inflammatory bowel disease) as well as use of probiotics in premature infants [7]. Minor risk factors include presence of a central venous catheter, an impaired intestinal epithelial barrier (due to a diarrheal illness or inflammatory disease), jejunostomy tube as the route of administration, antibiotics to which the probiotic species is resistant, probiotics with increased epithelium adhesion, and cardiac valvular disease (only with Lactobacillus species) [7]. The probiotics implicated tend to include Lactobacillus and Bifidobacterium species; however, these two species are also the most prevalent probiotics used [8].

An additional concern regarding the safety of probiotics is the possible transfer of genes encoding antibiotic resistance from the probiotic species to gut pathogens [6]. For example, certain species of Lactobacillus have a natural resistance to vancomycin, although this gene is located on a chromosome that does not undergo transfer [9]. However, given this theoretical concern, it may be advisable to avoid using species such as Streptococcus and Enterococcus as probiotics since they are closely related to common human pathogens [8].

Also of note, probiotics represent a large commercial market; from yogurt sold in supermarkets to capsules sold in health food stores. In the United States, probiotics are often regulated as dietary supplements, for which there is no requirement to demonstrate “safety, purity, or potency,” unless the manufacturer specifically states that the probiotic is intended to prevent or treat a disease [7]. If this claim is made, they are then classified as a biological product. Given the heterogeneity of probiotic choices, it is likely that certain probiotics will be more efficacious or have different mechanisms of action than others. Additionally, the different concentrations of microbes in each probiotic may result in sub-therapeutic dosing.

In conclusion, there is conflicting scientific evidence regarding whether probiotics are an effective therapy for reducing the incidence of CDAD in non-immunocompromised individuals. Further randomized control studies should include sicker patients who may be more likely to benefit from treatment, such as the immunocompromised and those in the intensive care unit. Additionally, it remains unclear which probiotic product to recommend, what the optimal dosing and duration of therapy should be, and how to approach our patients with risk factors for the rare occurrence of probiotic associated sepsis and endocarditis. These concerns need to be addressed before probiotics can become a standardized part of clinical care.