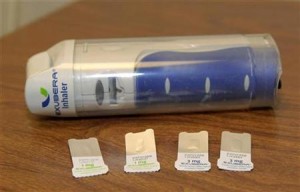 For many with type II diabetes, initiation of insulin therapy represents a devastating progression of their disease. Patients who are dependent on insulin require constant blood sugar monitoring, adherence to strict dosing algorithms, and up to 4 self-administered injections every day. According to a 2010 survey of non-insulin adherent diabetic patients, both “injection phobia” and inconvenience were found to be important barriers to initiation of insulin therapy. [1]. In response to these concerns, less invasive administration techniques such as inhaled insulin have been a topic of major interest over the last decade. Accepting inhaled insulin as a replacement for injectable could revolutionize the management of type II diabetes and improve the lives of millions of Americans suffering from the disease. And yet Exubera, the first FDA-approved form of inhaled insulin was pulled from the market only a year after its 2006 release due to poor sales. A second product, AIR insulin, was terminated during phase III clinical trials due to “uncertainty in the regulatory environment” [2]. Although a third product is currently awaiting FDA approval [3], the future of inhaled insulin remains murky despite important potential benefits for the estimated 26 million Americans with diabetes.

Inhaled insulin bypasses gastrointestinal peptidases and utilizes the massive surface area of the pulmonary epithelium (approximately 100 square meters) to deliver the insulin polypeptide directly into the blood stream. [4]. In a study of 17 volunteers, inhaled insulin was found to reach peak blood concentrations within 143 minutes, faster than injected regular human insulin and slightly slower than insulin lispro. These pharmacokinetic properties allow inhaled insulin to be used as a pre-prandial insulin bolus equivalent with an approximate efficacy conversion rate of 1 mg inhaled insulin to 3 units of subcutaneous insulin[5].

The first inhaled insulin product, Exubera, was developed by Pfizer and Nektar Therapeutics in the 1990s. The Exubera system packaged insulin into dry powder blister packets containing 1 or 3 milligrams of regular human insulin (equivalent to 3 and 8 units respectively) which were then loaded into a mechanical inhaler for bolus inhalation by the user [6]. Exubera performed well in phase I, II, and III clinical trials. In a phase III clinical trial published in Diabetes Care in 2004, 298 patients were randomized to 6 months of treatment with pre-meal inhaled insulin plus bedtime long-acting insulin or subcutaneous insulin (mixed regular/NPH insulin). The inhaled insulin regimen was found to be effective and well-tolerated with a similar decrease in hemoglobin a1C compared to subcutaneous insulin (-0.7% for the inhaled group, -0.6% for the subcutaneous group). The adjusted difference in hemoglobin a1C between the two treatment groups was -0.07% (95% CI -0.32 to 0.17). Additionally, the inhaled insulin group experienced fewer hypoglycemic events. Adverse effects observed in the inhaled insulin group included increased cough and a minor decrease in lung function that was not statistically significant. Additionally, quality of life scales showed significant improvement for patients on inhaled insulin compared to those on subcutaneous insulin [7].

Exubera received FDA approval in 2006, after which it appeared poised to revolutionize the market for diabetes medications. Analysts expected blockbuster sales of up to $1 billion a year while the New York Times, declared in a front page article that there would be “more convenience and less pain for millions of diabetics” [8,9]. Despite these forecasts, Exubera was a commercial flop, achieving only $12 million during the first 9 months of 2007. On October 18, 2007 after nearly 2 years of poor sales, Pfizer announced that it was withdrawing Exubera from the market. The drug which had once promised to change diabetes management forever was later described as “one of the most expensive failures in the history of the pharmaceutical industry” [10].

Exubera was believed to have failed for a multitude of reasons, namely its cost (approximately twice as expensive as subcutaneous insulin), its design (the size of 2 stacked 18 ounce water bottles), and its non-superiority compared to subcutaneous insulin. There was also some confusion surrounding its dosing due to a package insert which stated that a 3 mg blister packet was not equivalent to three 1 mg blister packets [19].In addition, the FDA required interval monitoring of lung function for all patients on the drug due to observed changes in lung function during clinical trials [11]. Perhaps most alarmingly, Exubera also carried a theoretical risk of lung cancer due to potential cross-reactivity with insulin-like growth factor receptors in epithelial tissue [12]. As a result of these concerns, the FDA stipulated that Exubera was “not recommended” for patients with asthma or COPD and contra-indicated for tobacco smokers [19]. In 2008, Pfizer revealed that 6 of the 4,470 Exubera-treated patients versus 1 of the 4,292 comparator-treated patients developed lung cancer in a phase III trial [13]. Although the finding was not statistically significant and all of the new cases were prior tobacco smokers, the news put the future of inhaled insulin into question.

In the wake of Exubera’s failure, clinical studies of several other inhaled insulin systems were suddenly halted. AIR insulin, a delivery system composed of a much smaller palm-sized inhaler loaded with dry powder insulin was in the midst of phase III trials in March of 2008, when developer Lilly announced that it was terminating development [2]. The results of those clinical studies, published a year later, were equivocal, with one finding AIR insulin to be superior to subcutaneous insulin with no lung function changes and the other finding AIR insulin to be inferior with significant lung function changes [14,15]. Afrezza, another palm-sized inhaled delivery system which loads insulin into uniformly-sized microparticles called technospheres, remains one of the last inhaled insulin products in development [16]. A phase III clinical trial published in the Lancet in 2010 demonstrated non-inferiority to 70/30 twice-daily insulin with no decrease in lung function, fewer hypoglycemic episodes, and significantly less weight gain [17]. Similar results were found in a phase III clinical trial when preliminary results were announced in an August 2013 press release. Compared to insulin aspart, Affrezza demonstrated non-inferiority in lowering hemoglobin a1c, fewer episodes of hypoglycemia, decreased fasting blood glucose, and less weight gain [3]. Additionally, Mannkind is designing Affrezza to be about half the size of current albuterol inhalers in an attempt to avoid some of the backlash surrounding Exubera’s water bottle-size design around the time of its release. [19] Although these design improvements and clinical trial results show important advancements over previous inhaled insulin devices, Afrezza awaits final FDA approval as of May 2014 (a final decision by the FDA is expected by July).

7 years after the release of Exubera, the future of inhaled insulin remains uncertain. Although few can deny the impact that inhaled insulin would have on the lives of millions of diabetics, safety and feasibility concerns continue to hinder what is potentially the next revolution in diabetes management.

By Reed Magleby, MD is a medical student graduate at NYU School of Medicine

One comment on “Inhaled insulin: An Elusive Revolution in Diabetes Management.”