The answer to the mystery quiz is rhabdomyolysis due to legionella pneumonia (LP). The presentation of the patient, namely severe rhabdomyolysis complicated by acute kidney injury, obscured the presence of a subtle retrocardiac density that is visible on the CXR (Image 2, asterisk). The upper axial image from an abdominal CT, obtained one day after the CXR, shows the extent of the LLL infiltrate (Image 3). The infiltrate is contained by the major fissure and is characterized by air space consolidation and a visible air bronchogram. Retrocardiac densities are difficult to discern, but in this case the presence of crackles at the left base provided a clue to the radiographic abnormality. The lobar consolidation is most consistent with a bacterial infection, not a viral infection such as influenza pneumonia.

Rhabdomyolysis as the presenting feature of LP has been previously reported. Our case encompassed many of the features associated with LP, including hyponatremia, diarrhea, fever-heart rate dissociation, mayalgias, and encephalopathy (lethargy). Although many of these associations are non-specific, their presence should suggest the diagnosis. Our case had additional features due to the severe rhabdomyolysis, including 1) acute kidney injury requiring a period of hemodialysis before renal recovery, 2) hyperphosphatemia due to a combination of renal failure and release of phosphate from muscle breakdown, 3) symptomatic hypocalcemia due to sequestration of ionized calcium in areas of muscle breakdown, and 4) elevated levels of LDH and AST associated with damage to muscle as well. The mechanism of rhabdomyolysis is unknown but some have speculated direct invasion of Legionella into muscle or the release of its endotoxin into the circulation with subsequent muscle injury.

Legionella pneumonia may cause nosocomial or community-acquired disease in both normal and immuno-compromised patients. The disease is prevalent among elderly male smokers, chronic lung disease patients, those with malignancy and renal disease. Cases have been reported among transplant patients with the highest incidence seen with lung transplantation. A 1998 study of 392 cases of community-acquired pneumonia reported 12.5% due to LP and 20.4% of those required ICU admission (Sopena N, Chest 1991:113 (5), 1195-2000). The great majority of infections are caused by L pneumophila serotype 1 which will yield a positive urinary antigen test. The latter confirmed the diagnosis in our case. 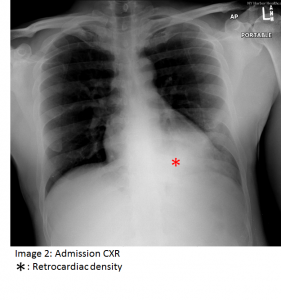