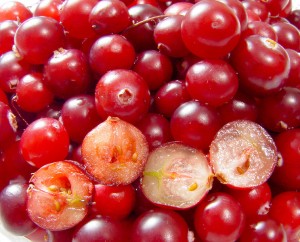 Please enjoy this post from the archives dated November 9, 2011

A healthy 21-year-old female college student presents to clinic after one day of dysuria and increased frequency. You diagnose her with a recurrent urinary tract infection (UTI), and as you hand her a prescription for empiric antibiotic treatment, she asks you if drinking cranberry juice will prevent these in the future…

Drinking cranberry juice to prevent urinary tract infections (UTIs) has been a traditional folk remedy for hundreds of years.[1] Stroll into any New York City pharmacy and you will find that cranberry-extract tablets are not in the vitamins section–they are on the same shelves as the UTI medications. As concerns regarding antibiotic-resistant bacteria and the high cost of prescription medications continue to mount, patients and physicians are searching for cheap and effective pharmacologic alternatives. However, is there solid evidence for using cranberries to treat UTIs?

Urinary tract infections (UTIs) are the second most common infection in the United States.[2] They occur when uropathogens from fecal flora colonize the vaginal introitus and invade the urethra and bladder. Cystitis comprises about 95% of all symptomatic UTIs, and Escherichia coli (E coli) cause 80-85% of infections in healthy young persons.[3,4] Acute cystitis occurs in people of all ages and both genders, but the highest incidence occurs among sexually active 18-24 year old women. Overall, 40-50% of adult females have experienced at least one UTI in their lifetimes.[3]

Recurrent UTIs are a common problem in young women; approximately 27% of women recur within 6 months of the first infection.[5] The majority of recurrences are reinfections by a different strain of bacteria.[6] Disparate factors like ABO blood type[7], glycolipid receptor expression on uroepithelial cells[8], intercourse with a new partner during the past year [8,9], vaginal colonization with enterobacteriaceae[10], and even the use of spermicide-diaphragms[11], are all thought to affect the propensity for recurrent UTIs.

Cranberries (Vaccinium macrocarpon) are a native North American fruit.[12] Cranberry juice has been manufactured since at least 1683. In addition to being consumed for food, cranberries have a long medicinal history. American Indians used the berries to draw poison from arrow wounds, calm nerves, and treat bladder and kidney ailments. American whalers and mariners ate cranberries to prevent scurvy while travelling the high seas.[1,13] Indeed, cranberry has a very good safety profile, and unless the patient is at risk for uric-acid kidney stones, on warfarin, or taking aspirin, there are not many contraindications.[12]

For decades, cranberry was believed to prevent UTIs by acidifying the urine[14], but this theory has now largely been debunked.[15] Current data suggest that specific components within cranberries may directly inhibit uropathogen adherence to uroepithelial cells or prevent bacterial growth.

Proanthocyanidins give cranberries their intense red color; these molecules appear to inhibit the adherence of p-fimbriated E coli to uroepithelial cells.[16] Cranberry also contains fructose, and some data suggest that it too may interfere with adhesion of type 1 fimbriated E coli to the uroepithelium.[17] The ascorbic acid content of cranberries may also play a role in decreasing urinary bacterial growth.[18] While the pharmacologically active component of cranberries remains debated, several recent in vitro studies generated interesting data suggesting that cranberry decreases bacterial adhesion to uroepithelial bladder cells in a concentration-dependent manner.[19] Pinzόn-Arango and colleagues also demonstrated that the longer E coli were exposed to either cranberry juice or proanthocyanidin alone, the more bacterial attachment decreased, and this effect was reversed by removing the cranberry juice or proanthocyanidin.[20]

Despite advances in basic science, data from human trials have not established the clinical merit of cranberry as a preventive treatment for recurrent UTIs. Many studies are limited by small sample size; inadequate control, randomization, and blinding; and weak statistical analysis. There is also no measureable marker to confirm medication compliance among study subjects. Finally, it is difficult to compare data across trials, as there is no standard form of cranberry used and no established unit for proanthocyanidin concentration.

The Cochrane Database published several meta-analyses that have attempted to synthesize the data from this disparate body of literature. Jepson and colleagues (2000) assessed the literature for randomized trials regarding treating UTIs with cranberry and concluded that there was no good quality evidence to support this use.[21] However, in a separate 2008 paper, they found that data seemed more optimistic regarding the use of cranberry in preventing symptomatic UTIs. They identified 4 good quality, randomized or quasi-randomized clinical trials, and found that together these papers showed that cranberry products significantly reduced the incidence of symptomatic UTIs at 12 months (overall RR=0.65, 95%CI: 0.46-0.90) compared with placebo. They concluded that cranberry may especially decrease the risk of recurrence in women with recurrent UTIs.[22]

Interestingly, new data from one of the largest, most rigorous studies regarding cranberry and UTI prevention was published in January 2011. Barbosa-Cesnik and co-authors reported that treatment with cranberry did not significantly decrease symptomatic UTI recurrence compared with placebo. This was a double-blind, randomized, placebo-controlled trial with 319 college-aged women. Cranberry and placebo groups were comprised of subjects with similar socio-demographic variables and UTI risk factors. Follow-up was 6 months or until a second UTI occurred, whichever came first. The study used an intention-to-treat analysis and was designed to detect a twofold difference between treatment and placebo (α=0.05; power=99%). The overall UTI recurrence rate was 16.9%; surprisingly, the cranberry group actually had a slightly higher recurrence rate than the placebo group (19.3% vs 14.6%, p=0.21). Even when authors adjusted the data to account for frequency of sexual activity and history of UTI, there continued to be no difference in recurrence risk between the groups. While the authors acknowledge that prior studies have reached more favorable conclusions regarding the efficacy of cranberry juice, they assert that many of these studies were either not blinded or statistically underpowered. They also speculate that the reason the two groups had similar recurrence rates may have been due to 1) an unanticipated active ingredient that was also present in the placebo—perhaps ascorbic acid, or 2) the study design caused participants in both groups to improve hydration and increase urinary frequency, thereby decreasing bacterial growth and mild symptoms.[23]

The jury is still out on whether cranberry should be recommended to women who suffer from recurrent uncomplicated UTIs. The American College of Obstetricians and Gynecologists’ guidelines state that in both prophylactic and intermittent therapies for non-pregnant women with uncomplicated acute bacterial cystitis, antibiotics are the first-line treatment.[24] While these same guidelines also acknowledge that some data suggest cranberry may decrease the recurrence of symptomatic UTIs, they caution that parameters necessary for therapeutic effects have not been determined or optimized.[24]

One comment on “Does Cranberry Juice Prevent Urinary Tract Infections?”