Bedside Rounds: How Useful are the Kernig and Brudzinski signs for Predicting Meningitis? 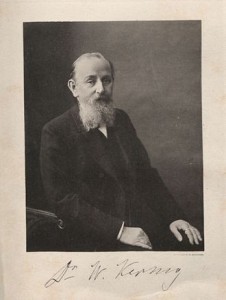 Even in this era of modern medicine, bacterial meningitis remains a widely feared diagnosis in both resource-rich and -poor settings worldwide. Bacterial meningitis is among the ten most common infectious causes of death and kills approximately 135,000 people around the world each year [1].

It is a medical, neurologic, and sometimes neurosurgical emergency that affects 4 to 6 per 100,000 adults annually [2].  Many healthcare providers may consider the diagnosis when evaluating a patient, but it can nonetheless be difficult to recognize and act on. Any such delay can be the difference between life and death.  According to a retrospective study, the median delay between the time of arrival at the emergency department and the administration of antibiotics was reportedly 4 hours [2].

A lumbar puncture is the diagnostic test of choice for meningitis. However, lumbar punctures are known to be somewhat invasive and unpleasant tests that have their own set of complications. How do we identify those patients who truly need one? For this purpose, we resort to the timeless history and physical. However, clinical history alone is not sufficient to arrive at a diagnosis of meningitis. According to a systematic review by Attia et al, symptoms of nonpulsatile headache, generalized headache, and nausea or vomiting offer only 15%, 50%, and 60% specificities for meningitis, respectively [3]. As far as the physical exam goes, the classic triad associated with meningitis is fever, neck stiffness, and change in mental status. According to Attia et al’s systematic review, although few patients presented with all three symptoms, 95% demonstrated two or more and 99-100% had at least one of these findings [3]. Van den Beek et al reported similar findings from their study of 1108 cases of meningitis identified in the Netherlands Reference Laboratory for Bacterial Meningitis database. They found that, while only 44% of patients demonstrated all three features of the triad, 95% of patients presented with at least two of the four signs (classic triad plus headache) and only 1% of cases had none of the four findings [4].

No physical exam for meningitis is complete without mentioning the Kernig and Brudzinski signs. Although nuchal rigidity, one of the hallmark features of bacterial meningitis was recognized as early as the 5th century BCE, these major eponymic signs – still so closely linked to the disease to this day – were not described until the late 19th century [6].

Vladimir Mikhailovich Kernig (1840-1917) was a clinical neurologist of Russian-Baltic German descent who was born in Lapaia, Latvia but received the majority of his professional training in Russia [7].  In 1882, Kernig described the sign that now bears his name, to a group of his colleagues in St. Petersburg:

“I have observed for a number of years in cases of meningitis a symptom which is apparently rarely recognized although it is, in my opinion, of significant practical value. I am referring to flexion contracture of the legs or occasionally also in the arms which becomes evident only after the patient sits up…If [with the patient sitting on the edge of the bed and legs dangling] one attempts to extend the patient’s knees one will succeed only to an angle of approximately 135 degrees.  In cases in which this phenomenon is pronounced, the angle may even remain at 90 degrees [6].”

Today, this maneuver is performed with the patient in the supine position with the hips and knees in flexion. The knee is then slowly extended.  The Kernig sign is said to be positive if this maneuver elicits pain along the hamstring muscle as a result of stretching of the inflamed sciatic nerve [7].

Josef Brudzinski (1874-1917) was a Polish-born pediatrician who also received most of his training in Russia [7].  He actually described several different physical signs of meningitis (e.g. the cheek sign and symphyseal sign, both described further below, and Brudzinski contralateral reflex, which consists of reflex flexion of a lower extremity in response to passive flexion of the contralateral lower extremity [8]), however his most famous sign that is now referred to as the “Brudzinski sign” was described as follows in 1909:

“I have noted a new sign in cases of meningitis: passive flexion of the neck causes the lower extremities to flex at the knees and the pelvis…With the child in the supine position, the examiner flexes the neck of the child with the left hand while resting his right hand on the patient’s chest to prevent it from rising [6].”

A patient is said to have a positive Brudzinski sign if the passive flexion of the neck elicits automatic flexion at the hips and knees [9].  Interestingly, the cheek sign, which is considered positive if applying pressure on both cheeks inferior to the zygomatic arch causes a spontaneous flexion of the forearm and arm [10], and symphyseal sign, which is considered positive if pressure applied to the pubic symphysis elicits a reflex hip and knee flexion and abduction of the leg, were most commonly observed in children with Mycobacterium tuberculosis meningitis, which was much more prevalent during Brudzinski’s time [7].

The utility of using the Kernig and Brudzinski signs to identify patients likely to have meningitis has long been debated. Both of these signs are indicators of meningeal inflammation, but neither are pathognomonic for meningitis [9].  Interestingly enough, Brudzinski himself published a study in 1909 reporting the sensitivities of Brudzinski and Kernig signs as 97% and 42% respectively [11].  These sensitivities are higher than those reported in more recent studies.  Some attribute this difference to the fact that the two most common causes of meningitis in Brudzinski’s time were Streptococcus pneumoniae and M. tuberculosis, both of which are known to cause greater degrees of meningeal inflammation than other infectious etiologies that are more prevalent today [7].

A study by Durand et al conducted at Massachusetts General Hospital between the years 1962-1988 demonstrated that, while S. pneumoniae was the most common pathogen identified in cases of community acquired meningitis overall (responsible for 24% observed 493 episodes), it was not an overwhelming majority [5]. In this study, gram-negative bacilli other than Haemophilus influenzae were responsible for 17% of the cases, whereas N. meningitides, other streptococci, Staphylococcus aureus, and Listeria monocytogenes caused 7-8% each. H. influenzae was identified as the causative organism in only 4% of the cases, and in 15% no pathogen was ever identified. The relative frequency of S. pneumoniae waned significantly in the period 1980-1988 compared to an earlier decade, 1962-1970. In this study, tuberculous meningitis was not identified in a single community or nosocomial case. Today, S. pneumoniae meningitis carries a poor prognosis independent of other factors, exhibiting odds of an unfavorable outcome six times as higher than does N. meningitidis (95% confidence interval, 2.61-13.91; P<0.001) [4].

More recently, Thomas et al published a study in 2002 examining the diagnostic accuracy of Kernig and Brudzinski signs and nuchal rigidity, in adult patients with suspected meningitis [12].  Adults (age > 16 years) presenting to Yale-New Haven Hospital Emergency Department between July 1995 and June 1999 with clinically suspected meningitis were eligible for participation. The study found that both Brudzinski and Kernig signs had a sensitivity of 5% with a positive likelihood ratio (LR+) of 0.97. The study concluded that these special physical exam findings did not accurately discriminate between patients with meningitis (defined as having 6 x 109/L white blood cells (WBCs) per milliliter of CSF or more) and those without. The diagnostic accuracy of these signs was not significantly improved in patients with moderate meningeal inflammation (defined as 100 x 109/L WBCs per milliliter of CSF or more).

Of note, the age of the patient in question may impact the utilities of these physical exam tests. Interestingly, the majority of patients examined in Kernig’s and Brudzinski’s original papers were children.  Ironically, it has become widely accepted that neither the Kernig or Brudzinski signs are reliable in diagnosing meningitis in infants younger than six months [7].  A retrospective study conducted by Levy et al demonstrated that, as the age of the patients increased (from 2-24 months to 5-12 years), the sensitivity of both the Kernig and Brudzinski signs also increased [13].  A similar trend is noted at the other end of the age spectrum, with Puxty et al reporting that Kernig sign was positive in 12% and Brudzinski sign in 8% of elderly patients on general medicine wards without bacterial meningitis, which is hypothesized to be related to the increasing incidence of cervical spine pathology in this age group which can complicate the interpretation of these maneuvers [14].

Thus, although we continue to regularly test for and document the Kernig and Brudzinski signs in our physical exams regularly, the current data suggest that it may be more of a historical finding and not one that is particularly helpful in delineating a case of bacterial meningitis based on the presence or absence of these signs alone.