The Brain’s Effect on the Heart After a Stroke 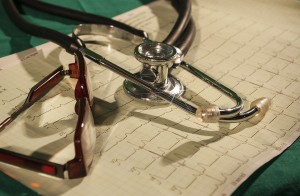 The heart and brain are hopelessly intertwined. Their connection is greater than the tissues and sinews that physically tether them to the human body, and can be understood in three ways: 1) how the heart affects the brain, 2) how the brain affects the heart, and 3) how the heart and brain are both affected by various neuro-cardiac syndromes.  The heart’s effects on the brain are illustrated when there is hypoperfusion of the brain resulting in syncope, or when the heart shoots off emboli to the brain in a dreaded consequence of atrial fibrillation.  Neuro-cardiac syndromes can be thought of as congenital disorders that affect both organs, such as Down’s syndrome or Friedreich’s Ataxia.  These syndromes can also include conditions that occur because of certain shared biological characteristics, such as defects of ion channels and gap junction proteins that both organs possess.  For example,  neurogenic deafness can sometimes be seen in heritable Long QT syndrome type 1.1 What is less well-known and understood are the effects incurred on the heart by the brain, and the mechanisms of these interactions.

As early as the 1940s, QT-prolongation and T-wave/U-wave abnormalities have been reported after acute strokes.2 It is estimated that 15-40% of patients presenting with an acute ischemic stroke, 60-70% of patients presenting with intracranial hemorrhage, and 40-70% of patients presenting with subarachnoid hemorrhage have ECG alterations.3 After acute ischemic stroke, these ECG alterations include, but are not limited to, T-wave abnormalities such as flattening, inverting, peaking and/or widening, the presence of U-waves and/or Q-waves, ST-segment depression or elevation, peaked P-waves, and an increased amplitude of the QRS complex.3,6 However, QT prolongation is by far the most commonly reported ECG finding after ischemic/hemorrhage strokes and subarachnoid hemorrhage (SAH), and this may never normalize after the initial cerebral insult.2,3,6 These ECG findings can occur regardless of whether or not pre-existing cardiac or coronary artery disease is present.4,5

In addition to these expected ECG changes, about 20-40% of patients with ischemic/hemorrhage stroke and nearly 100% of patients with SAH have reported experiencing some form of cardiac arrhythmia in the acute setting, including bradycardia, atrial fibrillation, atrial flutter, paroxysmal SVT, VT and VF.3 These arrhythmias can occur regardless of whether they precipitated the stroke (e.g. embolus formation from atrial fibrillation).  It is therefore of paramount importance to carefully monitor any patient with QT prolongation and T- and U-wave abnormalities (regardless of serum potassium levels), as they have  an increased  risk of VT/VF, Torsade de pointes, and sudden death.  This is especially true in stroke and SAH patients who have an elevated likelihood of concomitant cardiac or coronary disease given similar chronic risk factors.2,7 These cardiac findings can be so pronounced in stroke or SAH that these patients may actually be misdiagnosed with a primary cardiac insult.5 As such, it is crucial  to determine the presenting disease entity.

At least two theories have tried to explain this connection between the brain and heart. Both the multi-vessel coronary artery vasospasm theory and the cardiac microvascular dysfunction theory, though supported by animal models, have little clinical evidence in humans.5 The most well regarded theory, however, is the catecholamine hypothesis, which suggests that alterations in the autonomic nervous system may mediate deleterious changes in both cardiac and cerebral function and metabolism.5,8-10 The autonomic nervous system is regulated by a network of both cortical and subcortical sites in the brain.  The chief hubs that regulate this network include the insular cortex, amygdala, hypothalamus, and paraventricular nucleus.  It is thought that after a stroke, direct damage or secondary metabolic changes to any of these areas alter the regulatory balance of the sympathetic and parasympathetic nervous systems.  In particular, the insular cortex is extremely susceptible to elevated intracranial pressure, irritation from blood products, or direct active ischemia from the middle cerebral artery, and is believed to play a central role in catecholamine surge after ischemic strokes.3,4,9,11 Revved up sympathetic activity is then secondarily triggered by adrenal gland stimulation, which releases excess catecholamines that modulate cardiovascular function.3-5,8,10,11 Excess catecholamines produce hyper-excitable cardiomyocytes through the activation of calcium channels, yielding increased contractility, decreased muscle relaxation, and a propensity for tachyarrhythmias.5,6  This reflex clinically manifests as feeling the heart “racing” or “pounding” and is commonly experienced as a normal reaction to getting nervous or becoming startled, though this sensation is usually quite short-lived. When the heart encounters a powerful and prolonged catecholamine surge, patients may develop demand ischemia through subendocardial lesions that include contraction band necrosis, coagulative myocytolysis, and myofibrillar degeneration.  Of note, these pathologic changes are typically seen in the region of cardiac nerves rather than near the coronary macrovasculature that is typically affected in an MI.2 It is also important to consider that increased parasympathetic/vagal tone and depression of sympathetic stimulation has also been shown to cause bradyarrhythmias and even asystole/sudden cardiac death, which was seen in about 4% of SAH patients in one study.2,9

There is growing evidence to support a model of autonomic dysfunction in this process. A study in 2000 directly measured circulating catecholamine levels in the blood through isotope analysis in 18 patients with non-traumatic SAH as compared to two different control groups.  The study revealed that there was an approximate 3-fold increase of circulating serum catecholamines acutely in the SAH group as compared to either control group (10.2 ± 1.4 nmol/L in SAH group vs. 3.2 ± 0.3 and 4.2 ± 0.7 nmol/L in the control groups, p<0.05).  This catecholamine elevation persisted during the 7-10 day acute study period and only normalized after 6 months of follow-up.8 Other studies typically examine surrogate measures of autonomic dysfunction in association with stroke.  One study that sought to examine autonomic dysfunction after an ischemic stroke, evaluated 77 patients (on average 6 months post-stroke) and compared them to age-matched controls on a variety of autonomic function tests (including Ewing’s battery autonomic function, heart rate variability in response to Valsalva, deep-breathing, and the sit-to-stand maneuver).  The study revealed autonomic dysfunction in 82% of patients with large-artery and 63% of patients with small-artery strokes, as compared to only 21% of controls.   Patients with large artery infarcts demonstrated decreased function of all parasympathetic tests performed (p<0.05), and patients with small artery infarcts only showed impairment in two parasympathetic tests (heart rate response to deep breathing, p=0.01, and heart rate response to standing, p=0.004).12

Catecholamine surges are believed to mediate functional and structural cardiac disturbances. Neurocardiogenic damage is believed to directly manifest as left ventricular dysfunction.13 LV systolic dysfunction has been reported after SAH in up to 28% of patients.2 In a retrospective study of 169 aneurysmal SAH patients who underwent echocardiography, 15% were shown to have LV wall-motion abnormalities.  The specific abnormalities included apical hypokinesis (28%), non-apical hypokinesis (48%), and global hypokinesis (24%).10 Perhaps the best known example of catecholamine-induced cardiomyopathy is Takotsubo cardiomyopathy.  Takotsubo cardiomyopathy is also known as apical ballooning, “broken heart,” or “stress cardiomyopathy,” and is believed to result from physical or emotional stress.  These patients present in a manner resembling acute ST-segment MI on ECG, with elevated cardiac enzymes and evidence of LV dysfunction, however, angiography of these patients reveals normal coronaries.  Remarkably, these patients experience less than 1% in-hospital mortality and the structural and functional changes in the heart tend to be completely reversible within 6 months.2,5,14 The fact that the cardiac changes in Takotsubos tend to be transient and reversible with conservative measures speaks to the possibility that catecholamine surges trigger the initial process of myocardial dysfunction and remodeling, and then correct after normalization of catecholamine levels.

Given the profound electrocardiographic and functional cardiac changes that occur with intracranial pathology, it is not surprising to find other evidence of cardiac damage as well. Creatine kinase-MB (CK-MB) is reported to be elevated in 30-45% of stroke patients, even in the absence of clinically apparent or electrocardiographically detectable  myocardial injury.  In fact, CK-MB has even been proposed as a marker of cerebral infarction.2-4 CK-MB has been mostly replaced by cardiac troponin, as CK-MB is far less sensitive and specific for myocardial damage.4,5,9 Cardiac troponin is estimated to be elevated in 20-30% of patients with SAH and in 36-54% of patients with acute ischemic strokes.2,5,9,13 The AHA/ASA guidelines recommend assessing cardiac biomarkers in all patients presenting with acute ischemic stroke to evaluate for concurrent cardiac disease.7 Cardiac troponin is so highly implicated in cerebrovascular disease that it has also been used as a predictor of death from stroke.  In the Scottish Heart Health Cohort, in which 15,340 patients were followed over 20 years, it was found that elevated high-sensitivity troponin I of just 7.0 pg/mL in men and 4.7 pg/mL in women was predictive of a 2.5-times elevated risk of cardiovascular events (2,171 in total), death from MI (714) and stroke (797) as compared to the general population.15 It is important to note, however, that the numbers of stroke/intracranial hemorrhage patients with elevated troponin reported in more recent studies are in general higher than older studies.  This is due in large part to the increased sensitivities to serum troponin levels of newer assays.9,16

While more sensitive assays may improve the detection of cardiac ischemia, interpretation of elevated serum troponin levels in the setting of an acute stroke can be confusing. Given this difficulty the TRELAS (TRoponin Elevation in Acute ischemic Stroke) trial was conducted to improve the management of ischemic stroke patients with an incidentally noted troponin.  The study was completed in late 2014 and was designed to include all consecutive patients presenting to a single large medical center with imaging confirmed infarcts.  These patients were screened for troponin elevation (>0.05µg/L) on admission and hospital day 2.  Patients with elevated troponin and normal serum creatinine were referred for coronary angiography within 72 hours of admission.  Comparing the findings of these patients to age- and gender-matched NSTEMI patients could reveal culprit lesion patterns that may result in LV dysfunction.13 The results of this trial are pending.

Although the ECG alterations and enzyme elevations seen after stroke or intracranial bleed are alarming, it is important to first stabilize these patients. Consultation with neurology and neurosurgery, as well as prompt administration of thrombolytics when appropriate, should not be delayed.  This does not mean, however, that ECG changes following a stroke should be ignored.  With the notable exception of aneurysmal SAH, stroke patients often share the same cardiovascular risk factors as patients presenting with acute MI, such as diabetes, hypertension, dyslipidemia, or a history of smoking.7 Concomitant coronary, carotid, and peripheral vascular disease should also not be ignored in these patients and at the very least should be worked up and managed as an outpatient following the acute period.2 Cardiac arrhythmias causing hemodynamic instability require prompt stabilization to prevent further end organ damage.  Patients presenting with ischemic stroke should undergo embolic stroke workup to identify potential underlying arrhythmias (as up to 24% of patients with ischemic stroke have unrecognized underlying afib), and be started on anticoagulation when deemed safe to prevent hemorrhagic conversion.17-19 Much remains to be learned about the brain-heart connection, but a greater awareness of cardiac manifestations of cerebrovascular disease can improve diagnostic yield and aid in patient management decisions.