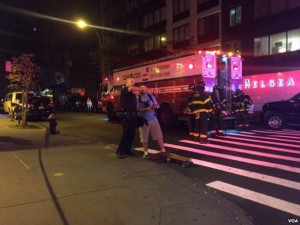 A powerful explosion occurred in Chelsea on Saturday night, injuring at least 29 people, including one with a serious puncture wound. Authorities believe that a homemade bomb caused the explosion, referred to as “an intentional act” in a news briefing by Mayor Bill De Blasio. A second explosive device was later found several blocks away, which was removed by the Police Department bomb squad. Investigations are currently ongoing as New York City remains on high alert. [1-2]

In national news, as the presidential election nears, the health of the candidates has been a recent topic of discussion following Hillary Clinton’s near-collapse at the September 11 memorial last week. Hillary Clinton and Donald Trump released detailed health records from their personal physicians revealing their medical history, laboratory results, medications and health maintenance screening. [3,4]

The utility of prostate-specific antigen (PSA) testing remains controversial, as the increased use of PSA testing has resulted in increased rates of diagnosis and treatment of prostate cancer. However, it is unclear whether these treatment interventions, which often have significant side effects, are more effective than watchful waiting.

A recent study published in the New England Journal of Medicine [5] included 2664 men who were diagnosed with localized prostate cancer based on a positive PSA result. Of those, 1643 were randomized to active monitoring, radical prostatectomy, or radiotherapy groups at the time of diagnosis. Serum PSA levels were monitored for all participants, and those with concern for progression of disease were referred for further testing and treatment as necessary regardless of randomization group. At the end of the 10-year period, 85% of those in the radiotherapy or surgery group received a radical intervention, while 53% in the active monitoring group received a radical intervention.

The primary treatment outcome was prostate-cancer-specific mortality at 10 years, along with secondary outcomes of all-cause-mortality, rates of metastases, clinical progression, primary treatment failure and treatment complications. At 10 years follow-up, there was no statistically significant difference among prostate-cancer-specific deaths across groups, with prostate-cancer-specific survival of at least 98.8% in all groups. In contrast, the incidence of disease progression was higher in the active monitoring group compared to the surgery and radiotherapy groups (112 compared to 46 and 46, respectively: p<0.001). It was found that a total of 9 men would need either prostatectomy or radiotherapy to prevent 1 patient from having progression of disease.

This study suggests that early radiation therapy and prostatectomy are more effective at preventing progression of prostate cancer compared to active monitoring. However, it also shows that death due to prostate cancer at 10 years is very low regardless of treatment group, though longer follow-up may necessary to identify further differences among groups. In addition, the results of the study may be skewed towards survival, as study participants were generally healthy individuals who were diagnosed based on screening PSA level.

For patients with acute cerebral hemorrhage, the current recommendation is to maintain a systolic blood pressure (SBP) of less than 180 mmHg to prevent hematoma expansion and to minimize associated morbidity and mortality. A recent randomized, multi-center study published in the New England Journal of Medicine [6] compared the efficacy of more intensive blood pressure lowering in the first 4.5 hours after symptom onset compared to standard practice.

The primary outcome was the proportion of patients with significant disability or death at 3 months. Secondary outcomes included quality of life scores at 3 months and the proportion of subjects with hematoma expansion of greater than or equal to 33% on CT 24 hours after presentation compared to CT on presentation. Significant death or disability occurred in 38.7% of those in the intensive treatment group compared to 37.7% in the standard treatment group (p=0.84). The study was discontinued due to futility prior to reaching target enrollment of 1280 participants.

Prior to conducting the study, the authors anticipated that the rate of death or disability would be 60% based on other published work. This suggests that the actual rate of 38% may have been artificially low due to study design. For example, because 56% of the study subjects had a baseline GCS score of 15, the potential effect of the study intervention may have been obscured by the subjects’ favorable baseline status. It is also possible that the increased level of standardization of medical care as a result of the study design inadvertently resulted in more positive outcomes, as this was a tightly monitored research study. Overall, these results suggest that intensive SBP reduction in acute cerebral hemorrhage is no more effective than standard SBP reduction with respect to associated disability and death.

It has been shown that decreased endogenous estrogen synthesis and loss of ovarian function following menopause is associated with obesity, diabetes and hypertension. As a result, a recent systematic review and meta-analysis published in JAMA Cardiology [7] sought to evaluate whether early menopause is associated with worse cardiovascular outcomes. The analysis included 32 studies looking at age and/or time since onset of menopause in relation to risk of cardiovascular outcomes with a total of 310,329 women included.

The study compared cardiovascular disease (CVD) outcomes, CVD mortality, all-cause mortality and intermediate CVD end points between women who experienced menopause at less than 45 years old (considered premature) compared to those greater than 45 years old (control group). When compared to the control group, it was found that women with premature menopause had an increased risk of nonfatal coronary heart disease (relative risk 1.50, 95% confidence interval 1.28-1.76), fatal coronary heart disease (RR 1.11, CI 1.03-1.20) and CVD mortality (RR 1.19, CI 1.08-1.31). Notably, the relative risk of all-cause mortality was found to be 1.12 (CI 1.03-1.21) in those with premature menopause. With respect to cerebrovascular events, relative risks for overall stroke and for stroke mortality were not significantly different across groups.

The above results suggest that women who experience premature menopause have a greater risk of coronary heart disease, CVD, and all-cause mortality. The above trends were unchanged when the studies were grouped by location, type of menopause, adjustment for socioeconomic status and hormone replacement therapy. Based on this study, clinicians may approach this subgroup of patients with closer monitoring and more aggressive risk stratification in order to decrease the risk of adverse cardiovascular events.

A recent paper published in JAMA Internal Medicine [8] analyzed historical documents which highlighted the sugar industry’s historical involvement in downplaying the role of sucrose in coronary heart disease. Beginning in the 1960s, there were two conflicting views regarding CHD dietary risk factors: one identified fat and cholesterol as the main culprits, while a competing view suggested sugar was the primary culprit. However, by the 1980s most scientists focused on fat and cholesterol in CHD and denied an association between sugar and CHD.

This paper analyzed historical documents involving the Sugar Research Foundation (SRF) during the 1950s and 1960s including reports, internal communication, symposiums and statements to determine how this change in theory occurred. The SRF was involved in increasing the market share of sugar by promoting a low fat diet based upon the association between fat and cholesterol with atherosclerosis. This culminated in the SRF funding a review that was published in the New England Journal of Medicine in 1967 in which researchers stated that reduction of dietary cholesterol and the substitution of polyunsaturated fat for saturated fat were the only dietary interventions necessary to prevent CHD. The sugar industry subsequently continued to fund research on CHD.

It is important to note that these documents were limited and may not be reflective of all activities of the sugar industry. There were also no direct accounts provided, as the main individuals involved have died. In any case, the statements in this paper suggest that the role of sugar in CHD may have been perpetually and intentionally underestimated to influence federal policy and public opinion. Therefore, the role of sugar in CHD requires further attention and discussion in relation to dietary changes and primary prevention of CHD.

A randomized control trial found that mild therapeutic hypothermia via rapid infusion of large volume cold normal saline during CPR in adults with out-of-hospital cardiac arrest was associated with decreased rate of return of spontaneous circulation in those with an initial shockable rhythm. [10]

The FDA voted to withdraw the black box warning on Varenicline (Chantix) which warned of serious neuropsychiatric risks, such as suicidal thoughts and hostility. [11]