The patient is an 86 year old man who presented with weakness, lethargy and falls.  His history was noteworthy for an episode of empyema nine years earlier that was managed with tube thoracostomy followed by decortication.  Seven years prior to this admission, upper endoscopy revealed Barrett’s esophagus and adenocarcinoma of the distal esophagus.  An esophagectomy and gastric pull-up was performed.  The patient had intermittent episodes of aspiration over the subsequent years.  Prior to the current admission, the patient complained of weakness, subjective fever, productive cough and breathlessness.  On exam, the patient was afebrile, blood pressure 110 systolic, pulse rate was 70 bpm, and O2 saturation was 94% while breathing ambient air.  Examination of the chest revealed course crackles at the right base.  White count was 16.8K with a left shift and serum creatinine was elevated over baseline to 1.9mg/dl.  Two days after admission, the patient appeared more tachypneic and lethargic, prompting a transfer to the medical intensive care unit (MICU). Chest radiograph upon transfer to the MICU is shown. 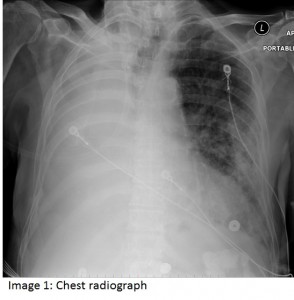