Before you read the answer, please review the original Mystery Quiz posted 11/18/16.

The answer to the mystery quiz is aspiration pneumonia.  The CXR (Image 1) shows a total opacification of the right hemithorax.  Importantly, the tracheal air column is deviated to the side of the opacification.  This indicates loss of volume of the right lung due to endobronchial obstruction from aspiration (e.g. gastric contents), endobronchial tumor or foreign body.  Although one might consider pleural effusion, chylothorax and empyema as possible causes of total opacification, such pleural processes most likely would cause tracheal deviation to the opposite side.  CXR Image 1 also shows infiltrates at the left base.

The CXR one day prior to Image 1 (Image 2A) shows aeration of the right hemithorax with bibasilar infiltrates.  The CXR performed after chest PT and airway suctioning (Image 2B) shows re-aeration of the right hemithorax.  Lung collapse is noteworthy for its rapid onset and rapid resolution, unlike inflammatory processes and pleural effusions.  To confirm the absence of pleural fluid, a bedside ultrasound or chest CT scan can be performed.  Chest CT (Images 3A and 3B), concurrent with the CXR showing total opacification, reveals 1) only a small amount of pleural fluid, 2) collapsed non-aerated lung, 3) a dilated gastric pull-up, and 4) secretions in the mainstem airways.

These radiologic findings coupled to the patient’s history lead to a diagnosis of chronic aspiration with superimposed acute aspiration.  The most important component of the patient’s tendency for aspiration is the absence of an esophagus that has been replaced with a pulled-up stomach.  Lethargy and an inability to protect the airway also predispose to aspiration.

Aspiration may lead to, or masquerade as, several other pulmonary conditions.  An earlier CT (Image 4A) shows reticular shadows, traction bronchiectasis and an appearance of honeycombing which calls to mind pulmonary fibrosis.  Importantly, chronic aspiration can lead to these changes in the lung parenchyma and mimic idiopathic pulmonary fibrosis.  Due to architectural distortion of normal lung, our patient developed a further complication.  Images 4B and 4C show peripheral nodules that initially raised concerns for malignancy.  A transthoracic biopsy of one of the nodules revealed non-caseating granuloma that on culture grew Mycobacterium avium complex.  The latter is often associated with this type of parenchymal change.

Our case highlights a condition, acute and chronic aspiration, which can mimic, and be complicated by, other pulmonary disorders.  The patient did not survive the hospitalization.  Aspiration can lead to hypoxia, acidosis and lethargy. Lethargy, in turn, begets further aspiration.  In this clinical scenario, it is not surprising that such patients may spiral downward and eventually succumb to a respiratory/cardiac arrest. 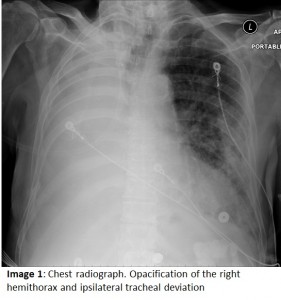 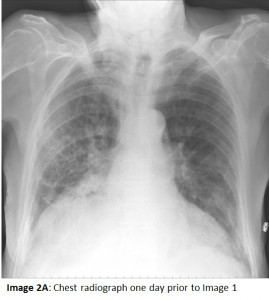 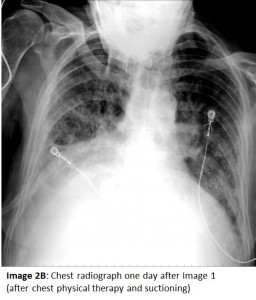 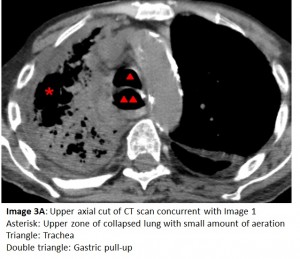 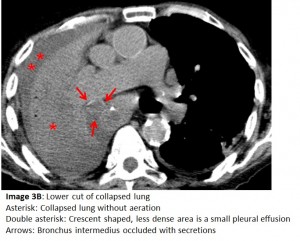 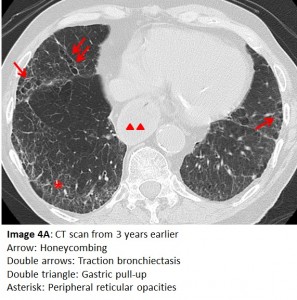 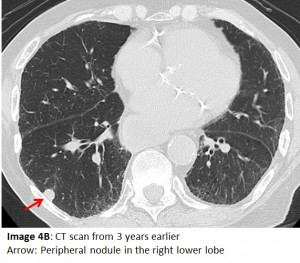 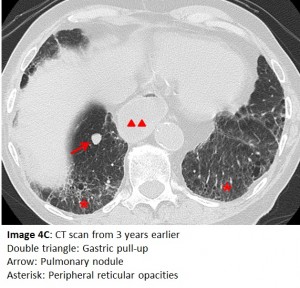