What is the Evidence for Noninvasive Ventilation in Acute Cardiogenic Pulmonary Edema? 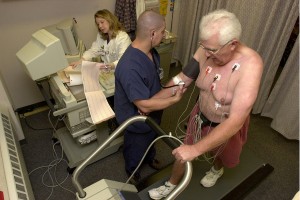 A 58-year-old man presents with worsening dyspnea and nonproductive cough for five days. Significant history includes a recent hospitalization for congestive heart failure. He is afebrile with a blood pressure of 95/55 mmHg, heart rate of 115 beats per minute, and oxygen saturation of 85% on room air. Physical exam is notable for rales bilaterally. Chest X-ray shows bilateral pulmonary infiltrates and an enlarged cardiac silhouette suggestive of cardiogenic pulmonary edema. Standard therapy is initiated with oxygen by face mask, diuretics, and a nitrate, however, the patient’s pulmonary edema does not improve. Noninvasive ventilation is considered. Should continuous positive airway pressure (CPAP) or bilevel positive airway pressure (BPAP) be used?

Noninvasive ventilation (NIV) is the delivery of ventilation without the use of an artificial airway (i.e. tracheostomy or endotracheal intubation). The original methods of NIV were through devices that generated negative external pressure, such as the iron lung. Noninvasive positive pressure ventilation is now the standard mode of NIV, which primarily is comprised of CPAP and BPAP [1]. Of note, “BiPAP” is often used incorrectly to refer to the BPAP mode, however, BiPAP is the name of a particular ventilator manufactured by Respironics and is only one of many ventilators that can deliver BPAP [2].

CPAP delivers constant pressure throughout the respiratory cycle. It is functionally similar to positive end-expiratory pressure (PEEP), which minimizes end-expiratory alveolar collapse and thus improves oxygenation [3]. As such, CPAP is primarily used for hypoxemic respiratory failure [4].

In contrast to the uniform pressure applied by CPAP, BPAP delivers two different pressures comprised of a higher inspiratory positive airway pressure (IPAP) and a lower expiratory positive airway pressure (EPAP). IPAP is a pressure applied during inhalation that forces more air into the lungs. EPAP is a pressure applied during exhalation that increases comfort and keeps the airways and alveoli open (analogous to PEEP or CPAP) [4,5]. The difference between IPAP and EPAP is pressure support, which augments tidal volume [6]. Since a larger difference between IPAP and EPAP translates to a larger tidal volume, minute ventilation is improved [7]. As such, BPAP can be used in patients with both hypercapnic and hypoxemic respiratory failure [4].

Application of PEEP (as CPAP or as EPAP in BPAP) reduces work of breathing by counteracting the patient’s intrinsic PEEP [8]. Pressure support (i.e., the difference between IPAP and EPAP) reduces work of breathing by decreasing the patient’s intrinsic contribution during inspiration to the transpulmonary pressure [9]. Both PEEP and pressure support can help overcome atelectasis, decrease respiratory muscle oxygen consumption, and improve expiratory tidal volumes [10]. These changes improve ventilation/perfusion (V/Q) matching, oxygenation, and carbon dioxide expiration [4].

The positive pressure applied by CPAP and BPAP also raises intrathoracic pressure, which reduces venous return to the right heart, and thus reduces preload [11]. For preload-dependent patients, this reduction in right ventricular filling pressures may increase the risk of hypotension [12]. Increased intrathoracic pressure also assists the left ventricle by reducing afterload via the reduction of transmural pressure during systole, which allows the myocardium to work more efficiently [11]. Therefore, circulatory changes occurring with positive pressure ventilation can decrease both preload and afterload, which can be helpful in cardiogenic pulmonary edema, but must be applied cautiously in preload-dependent patients [4,12].

While several randomized trials and meta-analyses demonstrate that NIV in acute cardiogenic pulmonary edema (ACPE) reduces the need for intubation and improves respiratory parameters (e.g. heart rate, dyspnea, hypercapnia, acidosis), there is conflicting evidence regarding its impact on mortality [13-24]. Specifically, the majority of high-quality individual randomized trials have failed to show a mortality benefit of NIV compared to standard oxygen therapy [17,19]. In contrast, some meta-analyses found that CPAP, but not BPAP, is associated with reduced mortality compared to standard therapy [18,20,21,23]. Other meta-analyses found no significant difference in mortality when CPAP and BPAP were directly compared [20-22,24].

One small randomized trial comparing BPAP versus CPAP in ACPE found that BPAP improved ventilation and vital signs more rapidly than CPAP, but was associated with a higher rate of MI [25]. Specifically, the MI rate was 71% in BPAP group vs. 31% in CPAP group, as compared to 38% in historically matched controls (p=0.05). This study was terminated prematurely due to this finding. The investigators suggested that the mechanism for increased MI with BPAP might be from higher intrathoracic pressures reducing myocardial perfusion.

Another small study found that high-dose intravenous isosorbide-dinitrate (ISDN) was safer and more effective than BPAP in treating severe pulmonary edema [26]. Patients treated with BPAP as compared to ISDN had significantly more adverse events (deaths, intubation, and MI) (55% in BPAP versus 10% in CPAP, p=0.006). This study was also terminated prematurely due to these findings.

The majority of subsequent studies and meta-analyses failed to support these findings [18,21-24]. For instance, one meta-analysis of 23 randomized trials found no significant difference in new MI with BPAP versus CPAP for ACPE (RR: 1.49, 95% CI: 0.92-2.42, p=0.11) [21]. In addition, another meta-analysis of 13 trials found that in patients with ACPE, neither CPAP nor BPAP significantly affected risk of MI compared with standard therapy [18].

While numerous studies have shown a benefit of using NIV in ACPE, there is conflicting evidence on whether this benefit is only conferred by CPAP. Initial meta-analyses showed that CPAP, but not BPAP, significantly reduced mortality compared with standard therapy in ACPE, but a direct benefit of CPAP over BPAP could not be shown [18,20-22]. Furthermore, the majority of high-quality individual randomized trials have failed to show a mortality benefit with NIV compared to standard oxygen therapy [17,19].

There is also conflicting evidence in ACPE as to whether BPAP increases the rate of MI, as compared to CPAP. Initial small studies found that in patients with ACPE, treatment with BPAP resulted in a greater risk of MI than treatment with either CPAP or ISDN, leading to an older recommendation that CPAP be used preferentially in the treatment of ACPE [25-27]. However, more recent studies have failed to support this finding [18,21-24].

The current recommendation is to use either CPAP or BPAP in ACPE. Some argue for using CPAP because it is easier to use and less expensive than BPAP, while others recommend either [7, 28]. The American College of Cardiology/American Heart Association makes no specific recommendations regarding use of NIV, however, in its data supplements, it includes a large randomized controlled trial and meta-analysis supporting use of NIV as adjunctive therapy in ACPE [17,14,29]. The meta-analysis concludes that although the level of evidence is higher for CPAP, there are no significant differences in clinical outcomes when comparing CPAP vs. BPAP [14]. Other recommendations include those by the European Society of Cardiology, which recommends initiation of CPAP in the pre-hospital setting (because it is simpler to use than BPAP), with continuation of NIV on hospital arrival, with BPAP preferred in cases of ACPE with hypercapnia (e.g. history of chronic obstructive pulmonary disease or signs of respiratory fatigue) [7].

When determining whether to use NIV for the 58-year-old man who presented with acute cardiogenic pulmonary edema, the evidence should be considered. Specifically, there is evidence for using NIV in ACPE and, while there is more evidence for CPAP, there is no significant difference between CPAP and BPAP in clinical outcomes. Interestingly, while NIV is beneficial in acute cardiogenic pulmonary edema, randomized trials, such as the Adaptive Servo-Ventilation for Central Sleep Apnea in Systolic Heart Failure (SERVE-HF) trial, have failed to demonstrate a benefit in chronic heart failure [30].