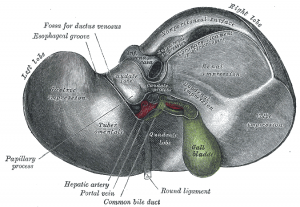 Today marks the first publication of the new Spotlight series in Clinical Correlations. This series uses case vignettes to explore diagnosis, pathophysiology, and management of a wide variety of diseases seen in the outpatient and inpatient settings.  Articles in the Spotlight section contain clinical pearls that will be highlighted in the case discussion.  While the occasional zebra may appear, the goal of the series is to provide clinically relevant information, and each case has been selected specifically for the relevance of its learning points rather than its rarity.

The patient is a 58 year-old man with cirrhosis as a result of non-alcoholic steatohepatitis with a model for end stage liver disease (MELD) score of 15. The patient underwent a TIPS procedure in 2013 due to refractory ascites. His TIPS was subsequently revised in 2015 with a balloon dilatation due to luminal narrowing of the shunt and subsequent persistent ascites. In the following year, the patient developed severe, frequent, poorly controlled episodes of hepatic encephalopathy requiring hospital admissions two to three times per month. Typically, he would present with grade 4 encephalopathy and require nasogastric tube placement and hourly doses of lactulose for several days prior to regaining baseline mental status The patient and his family endorsed strict compliance with lactulose and rifaximin and underwent teaching on how to titrate lactulose to bowel movements, but his episodes of encephalopathy persisted despite this.

Due to his recurrent, severe encephalopathy, the patient underwent a revision/narrowing of his TIPS, which resulted in nearly immediate return of his mental status to baseline. Three months later, he has not since been admitted for hepatic encephalopathy; however he has had one admission for ascites.

What is the cause of hepatic encephalopathy?

Hepatic encephalopathy (HE) refers to a series of cognitive and neuromuscular deficits that occur when a dysfunctional liver fails to remove neurotoxins from the blood. The spectrum of severity ranges from mild cognitive slowing and asterixis to coma. The pathogenesis of HE is complex and poorly understood. Though likely precipitated by the liver’s failure to remove ammonia from the GI tract, the downstream effects of cerebral astrocyte and total brain swelling, other factors, such as diminished cerebral perfusion, and alteration of neurotransmitter function likely contribute to more severe clinical manifestations [1]. The fact that HE may be precipitated by electrolyte abnormalities, use of sedatives, hemorrhage, and infection lends itself to the pathogenic complexity.

Undoubtedly, ammonia is an important factor that precipitates the neurologic dysfunction seen in HE. It is produced in enterocytes of the gut and enters the bloodstream via the portal vein [2], with subsequent delivery to the liver. The liver breaks down ammonia into urea which is then excreted by the kidneys. A cirrhotic liver’s inability to fully catalyze this reaction results in increased venous concentration of ammonia.

Inappropriate levels of ammonia may interfere with brain function in a variety of ways. Some data suggests that hyperammonemia increase uptake of amino acids across the blood brain barrier, which may affect synthesis of neurotransmitters [2]. Ammonia may also directly cause cerebral edema by increasing intracellular osmolarity, which occurs when astrocytes attempt to metabolize the molecule, breaking it down into glutamine [3, 4]. Ammonia is also capable of inhibiting both excitatory and inhibitory postsynaptic potentials within the brain [5], and may induce oxidative stress with downstream swelling of astrocytes [2].

How does a TIPS procedure increase the risk of hepatic encephalopathy?

A transjugular intrahepatic portosystemic shunt (TIPS) procedure is one strategy to treat the complications of end stage liver disease – most commonly, variceal bleeding and refractory ascites. These complications arise from portal hypetension, caused by increased resistance to blood flow through the portal venous system secondary to the damaged, cirrhotic liver. The TIPS procedure involves the creation of a shunt between of the portal and hepatic veins, essentially bypassing the flow of blood through the liver parenchyma. The channel serves to reduce the pressure in the portal vein.

The procedure is done under local anesthesia by an interventional radiologist, and has therefore become a widely used and popular practice in individuals with complications of cirrhosis. However, up to 35% of patients who undergo TIPS develop hepatic encephalopathy [6, 7]. The pathophysiology behind this is not fully understood. However, it has been theorized that the major contributing factor is portal hypoperfusion. Purposefully, blood flow post-TIPS has been diverted away from the liver parenchyma – which results in both inability of the liver to breakdown any ammonia derived from the portal bloodstream, and also further damages the already compromised liver at the cellular level – a concept known as “sinuoidial steal” [8].

How do lactulose and rifaximin reduce the symptoms of hepatic encephalopathy?

Acute episodes of hepatic encephalopathy are often caused by a precipitating factor that must first be ruled out – such as variceal bleeding, infection, use of sedatives, or metabolic abnormalities as discussed above. In these situations, reversing the underlying cause is the primary treatment for HE. If no cause is determined, the gold standard of treatment for hepatic encephalopathy, whether or not related to TIPS, is medical therapy with lactulose and rifaximin.

Lactulose is a non-absorbable disaccharide, and therefore it is not broken down by the small intestine. Once in the colon, it is taken up by colonic bacteria which break it down into short chain fatty acids, including acetate, proprionate and butyrate, via fermentation [9]. This effectively acidifies the lumen of the small bowel and facilitates the addition of a proton to neutrally charged ammonia. The positively charged ammonium is then trapped in the lumen and consequently excreted in the stool [9]. Typically lactulose is administered orally, though can be given via nasogastric tube or rectally in the obtunded patient, and titrated to 2-3 bowel movements per day to achieve maximum effect. Notably, patients may experience symptoms related to increased frequency of stools, such as volume depletion or electrolyte abnormalities – which in itself may worsen hepatic encephalopathy – though these side effects are generally preventable and controllable [10].

Rifaximin is an antibiotic that binds to the bacterial DNA-dependent RNA polymerase, inhibiting RNA synthesis and therefore cell division [11]. It is used to treat hepatic encephalopathy under the assumption that it reduces the amount of ammonia-producing bacteria in the gut, thereby decreasing the amount of ammonia, which enters the bloodstream. However, data suggests that alteration of the intestinal microbiota of cirrhotics by rifaximin reduces the risk of encephalopathy by other mechanisms as well. In mouse models, rifaximin has been shown to reduce amino acids and bacterial products that may lead to HE, and it also reduces intestinal permeability, resulting in less absorption of these products [12].

Hepatic encephalopathy is among the most frequent complications encountered by individuals with end stage liver disease. It is often exacerbated by placement of a TIPS, which involves creation of a shunt, allowing portal blood flow to bypass the liver parenchyma. Consequently, ammonia is not broken down or excreted and ultimately crosses the blood-brain barrier with varying effect on cognitive function. Lactulose and rifaximin are the mainstays of treatment for hepatic encephalopathy caused by TIPS; however in some instances, as with the above patient, the TIPS may need to be revised to reduce the instance of these effects. TIPS revision involved narrowing the lumen of the TIPS, thereby reducing the amount of blood that bypasses the liver parenchyma, thus increasing breakdown of ammonia abd other cerebro-toxic metabolites, which would otherwise result in encephalopathy. Naturally, while it reduces the risk of HE, TIPS revisions will reduce the effectiveness of the TIPS itself and the patient may suffer a recurrence of the original health issues that necessitated the TIPS in the first place, as was seen in this patient.