Spotlight: Pneumocystis Pneumonia in a Patient Without AIDS, A Clinical Vignette 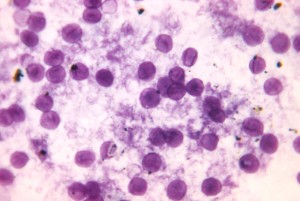 The patient is a 35-year-old man with a history of psoriatic arthritis and complex regional pain syndrome on prednisone, methotrexate and abatacept who presented with two weeks of dyspnea on exertion and cough.  Three months prior to admission, the patient increased his dose of prednisone (from 10mg to 20mg daily) to better control his psoriatic arthritis.

Progressive dyspnea on exertion appeared two weeks prior to presentation and a nonproductive cough developed one week prior to presentation.  The patient also reported night sweats during this time but otherwise denied fevers, chills, chest pain or palpitations, leg swelling or wheezing.  He had no recent travel history, sick contacts or occupational exposures.

On arrival, the patient was afebrile with a heart rate of 114 beats per minute, a respiratory rate of 24 breaths per minute and an oxygen saturation of 92% on ambient air.  The physical exam was notable for fine crackles and bronchial breath sounds over the right mid-lower lung field.  Initial labs revealed white blood cell count of 21.9 K/uL with 80% neutrophils but was otherwise unremarkable. A rapid HIV test was negative.  Chest XR demonstrated right middle and lower lobe consolidations and left basilar hazy opacities consistent with multifocal pneumonia.  He was started on antibiotics for community acquired pneumonia and admitted to the hospital.

The patient’s dyspnea continued to worsen over the first two hospital days despite antibiotic therapy.  On hospital day 2 beta-d-glucan was noted to be positive (> 500 pg/mL).  Later that day his respiratory status decompensated necessitating ICU transfer and intubation.  Bronchial lavage identified Pneumocystis jiroveci on routine and PAS stain.  He was treated with IV TMP-SMX and prednisone. He recovered and was discharged to inpatient pulmonary rehabilitation.

This case highlights a young, chronically ill, HIV-negative patient on chronic immunosuppressive medications who presented with worsening constitutional symptoms and dyspnea and was found to have PJP.   While this case raises many learning points, we narrowed our focus to two specific questions.  First we will review specific types of immunodeficiency, namely cellular versus humoral, and discuss implications on the risk for PCP.  The second question will address the evidence for giving antibiotics as prophylaxis for PCP pneumonia in patients who are on chronic steroids.

The pneumocystis pathogen-host interaction is well-described.[1] It used to be thought that colonization was ubiquitous and disease only occurred once immunodeficiency developed.  However, a number of laboratory, clinical and epidemiologic studies challenged this.  For example, pneumocystis strains vary within cities and infected patients’ strains tend to be more similar to their current location rather than their birth location.[2]

An important feature of the case presented was the ongoing treatment with abatacept.  This biologic agent typically used for rheumatoid arthritis is a monoclonal antibody against CD80 and CD86 on T cells.  These cell-surface proteins provide the necessary co-signaling for T cell activation and proliferation.  The medication effectively induces a mild form of SCID.  In a similar case report of PCP in a patient being treated with abatacept, there was co-treatment with methotrexate.[5]  Although considered safe, there is an increased risk of the same invasive fungal infections with abatacept treatment as SCID patients often experience.[6]

Independent of the inflammatory response that it mediates, the pneumocystis infection is fairly benign.[7]  The pneumocystis-infected SCID mice described above had preserved oxygenation and lung function until later stages of the disease.  It wasn’t until splenic CD4+ T cells were reintroduced that these mice experienced impaired lung function and tissue oxygenation as a result of the dysregulated response.  An analogous phenomena occurs when HIV-positive patients initiate anti-retroviral therapy during PCP treatment causing the immune reconstitution inflammatory syndrome.[8]

This observation explains some of the clinical differences in pneumocystis infections in HIV-infected versus uninfected patients.  Those with HIV develop pneumonia that is characterized by indolent progression of the disease.  Bronchoalveolar lavage (BAL) in these patients demonstrates large numbers of organisms and few neutrophils (but abundant macrophages and CD8+ T cells).  In the HIV-uninfected population, PCP is fulminant with greater morbidity and mortality.[9]  BAL analyses in HIV-uninfected patients demonstrate few organisms that evoke a robust neutrophilic response with alveolar inflammation and oxidative damage.[10]

It also appears that the humoral immune response plays an important role in the pneumocystis infection response.  There have been reports of spontaneous outbreaks of PCP in B-cell deficient mice with fully intact cellular immune systems.[11]  Subsequent studies have noted that clearance of pneumocystis is dependent on B cells but not on pneumocystis-specific antibodies.[12]  This suggests that B cells play a role in T cell activation in the clearance of pneumocystis, and explains the risk imposed on patients getting rituximab therapy.  A Mayo Clinic review of PCP cases in patients exposed to rituximab demonstrated that while infection can occur during monotherapy it is much more common when used in combination with cytotoxic chemotherapy or high dose glucocorticoids.[13]

In the HIV-positive population the risk of PCP below a CD4+ T cell count of 200 makes the threshold at which to initiate primary prophylaxis straightforward.[14]  No such level exists for HIV-uninfected patients at risk for PCP, and as new immunosuppressive medications become more widely available this population will continue to grow.  One particularly challenging subset of at-risk HIV-uninfected patients are those on chronic glucocorticoids.  The 2011 American Thoracic Society guidelines recommend consideration of PCP prophylaxis in patients taking chronic steroids if the dose is greater than or equal to 20mg of prednisone daily for one month, especially if there are concomitant T cell deficits, cytotoxic or anti-TNF agents.[15]  This dose and duration first appeared in the literature in the late 1980s to mid-1990s with the publication of several case series of HIV-uninfected patients diagnosed with PCP.[16],[17],[18]   Prolonged corticosteroid use with concomitant immunosuppressive disease or medication was the common thread throughout the vast majority of these patients.  In these reports, one from Memorial Sloan Kettering Cancer Center (MSKCC) and two from the Mayo Clinic, the median daily dose was 20-80mg of prednisone daily for 9 weeks to 3 months.  The recommendation of 20mg daily prednisone for 4 weeks appears to be the MSKCC prophylactic policy that is then referenced-forward.[19]

Pneumocystis pneumonia is a life-threatening infection that was first recognized in the HIV-infected population.  In the early days of the AIDS epidemic the prevalence of PCP in patients with low CD4+ T cell counts helped us understand the importance of cellular immunity in controlling the infection.  The observed clinical differences between HIV-infected and HIV-uninfected patients with PCP clarified the role of a dysregulated immune response as the primary culprit in pulmonary damage due to pneumocystis.