Stem cells for heart failure: What is the evidence? 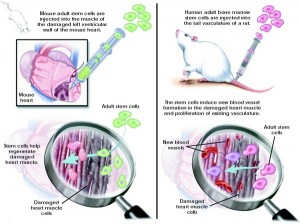 The Scale of the Problem

Despite decades of rigorous data collection, drug research, patient education and evidence-based practice, ischemic heart disease (IHD) and congestive heart failure (CHF) remain among the most deadly diagnoses in America. The standardization of medical therapy and surgical revascularization have reduced morbidity and mortality, but these measures have not kept pace with the burden and cost of disease, which continue to expand as the population ages and more patients survive acute myocardial infarction. IHD and CHF are heterogeneous and multifactorial, but their common course is marked by dysfunctional cell signaling and the death of cardiomyocytes, leading to hibernating or scarred cardiac tissue and decreased pump function.

These cells might be harvested from the patient or a suitable donor; isolated, cultured or otherwise enhanced ex vivo; and then delivered back to the patient via intracardiac infusion or intramyocardial injection, perhaps during CABG or PCI.

Indeed, a number of clinical studies have investigated this premise, with variable but intriguing results. The studies discussed here are limited to bone-marrow derived stem cells and cardiac progenitor cells, those stem cell populations that have been most heavily researched and appear most promising for the development of a cell-based therapy. While embryonic and induced pluripotent stem cells have been investigated in animal models, their use is associated with many risks including tumorigenicity that will likely limit their application in the clinic. Similarly, skeletal myoblasts have been associated with arrhythmogenesis that will probably hinder widespread use.

Bone marrow-derived stem cells are isolated from marrow aspirates or peripheral blood (usually after mobilization with G-CSF), and are thought to work by either engrafting into the injured myocardium directly or through paracrine signaling. BMSCs are a mix of undifferentiated cell types, and have been shown to differentiate in vitro into both vascular endothelial cells and cardiomyocytes.[1]  The factors secreted by BMSCs have not been definitively characterized, but are believed to work by recruiting new blood vessels, inhibiting fibrosis and/or stimulating myogenesis.

A 2014 Cochrane review[2] of 23 randomized clinical trials evaluating BMSCs for chronic IHD found that, in aggregate, the delivery of BMSCs to patients resulted in an unclear effect on clinical outcomes (mortality and rehospitalization), but improved surrogate indicators (e.g,  LVEF and New York Heart Association (NYHA) class) over short- and long-term follow-up. Many trials included in the analysis did suggest improvement in clinical endpoints with BMSC treatment (mortality RR 0.28, p = 0.02; heart failure-related rehospitalization, RR 0.6, p = 0.04), but the Cochrane reviewers designated the evidence as “low quality,” due to the low number of deaths and hospital readmissions across these small studies (most had fewer than 50 participants). The trials were better-powered to report surrogate endpoints, with LVEF improved overall by 4.22% in studies less than 1 year in duration, and 2.62% in longer-term studies. NYHA Class improved by 0.63 in studies less than 1 year, and by 0.91 in longer-term studies. These data must also be interpreted with caution, however, as the studies were not always sufficiently blinded to remove the risk of bias.

Interestingly, the greatest improvement was seen in patients with the worst LVEF and NYHA Class at study initiation. In 2010, Poveshenko et al.[3] randomized 110 patients with IHD, end-stage CHF and no option for revascularization to receive either bone marrow mononuclear cells (BMMCs) with standard medical therapy, or medication alone. BMMCs were aspirated from the iliac crest and injected into the border zone of a prior myocardial infarction, with no periprocedural complications. The authors found a statistically significant and sustained improvement in NYHA class in the treatment arm (3.3 ± 0.2 at baseline, 2.4 ± 0.23 at 3 months, 2.3 ± 0.2 at 6 months, 2.5 ± 0.1 at 12 months) as it worsened in controls (3.5 ± 0.1 at baseline, 3.5 ± 0.8 at 3 months, 3.8 ± 0.1 at 6 months, 3.9 ± 0.1 at 12 months). Similarly, the LVEF increased in the treatment group as it decreased in the control arm (baseline 27.8 ± 3.4 vs. 26.8 ± 3.8 at baseline, 32.3 ±4.1 vs 25.2 ± 4.1 at 12 months). Seventy-three percent of patients in the BMMC group demonstrated improved myocardial perfusion in the areas injected 6 months after treatment. Patients in the treated arm also reported fewer daily episodes of angina, were able to walk greater distances in 6 minutes, and scored better on a standard quality of life indicator (the Minnesota Living with Heart Failure score) compared with baseline and controls.

The heart also has it own resident population of stem cells (CSCs). Multipotent cardiac progenitors have been identified in the hearts of embryonic mammals, capable of differentiating into cardiomyocytes, endothelial cells and smooth muscle.[4],[5] A number of labs have also demonstrated that cardiomyocytes regenerate throughout adult life, with estimated rates of turnover likely close to 1% per year and declining with age.[6],[7] Tremendous controversy exists about the manner of this renewal; evidence shows that it may occur through differentiation of adult progenitor cells, division of pre-existing cardiomyocytes or even through so-called “epithelial-to-mesenchymal transformation” of epicardial cells.

Complicating matters further is that baseline homeostatic mechanisms for renewal may vary substantially from any renewal seen after injury.  Delivery of exogenous CSCs to infarcted myocardium may result in direct engraftment, differentiation and repair. More likely, these exogenous CSCs may work in a paracrine fashion, stimulating native CSCs to complete the repair work.[8] Even the cell surface markers used to define putative cardiac progenitor cells are controversial, and the details are beyond the scope of this review. Suffice it to say that most investigators agree on c-kit as one marker of CSCs and have exploited this feature to isolate and expand CSCs from cardiac samples obtained during CABG or via biopsy.[9] The cells can be grown and differentiated into ex vivo, and transplanted back into heart failure patients.

In the well-publicized randomized open-label Phase I SCIPIO trial[10], investigators enrolled patients with post-infarct, pre-CABG LVEF <40%. During CABG, CSC-containing tissue was harvested from the right atrial appendage and grown in culture. Four months later, the patients either underwent catheterization and received intracoronary infusion of CSCs, or had additional no intervention. There were no CSC-related adverse events. In 14 treated patients, LVEF improved to 38.5% at 4 months post-infusion from 30.3% at baseline (p = 0.001), and increased even further at one year. The LVEF of controls remained unchanged. In 7 treated patients who underwent cMRI, infarct size decreased by 24% at 4 months (p = 0.004) and by 30% at 1 year (p = 0.04) compared with baseline.

In another randomized Phase I trial of CSCs, the CADUCEUS[11] investigators enrolled patients with recent MI and successful PCI (within 1 month) and reduced EF (25-45%). Patients in the treatment arm underwent endomyocardial biopsy, from which CSC-containing “explants” were grown into small balls called “cardiospheres” and further processed into cardiosphere-derived cells (CDCs). The CDCs were infused into the infarct-related artery 1.5 to 3 months after MI. At 6 months after infusion, MRI analysis of the treatment group revealed reduced scar mass, increased viable heart mass, and improved contractility compared with controls (all p < 0.05). Notably, there was no difference between the groups in terms of LVEF and end-systolic and end-diastolic volumes over this period. A second paper published by the CADUCEUS investigators demonstrated that these effects roughly persisted at 1 year.[12]

While it is unclear how these cells work—and indeed, whether they do work—there are a number of interesting lessons to be learned from the preliminary human experiments conducted so far. Not least among these is the impressive safety profile of stem cell transfusion procedures. Assuming some cells do engraft and presumably differentiate or signal differentiation in an electrically and mechanically dynamic environment, it is impressive how seamlessly coupling occurs, without inducing arrhythmias or worsening wall motion abnormalities.  Preliminary studies also demonstrate that the harvesting, processing and administration of stem cells is feasible with existing technologies. BMDCs are particularly attractive in this regard, as they can be transplanted without the ex vivo expansion required for other cell types.

Importantly, these initial studies underscore the multitude of technical factors that must be considered and optimized prior to wide-scale clinical use of stem cell therapy for IHD. Researchers continue to investigate more robust cell-processing methods, work to optimize cell type and dose and develop more efficient delivery systems. In the studies discussed herein, scientists routinely transplanted millions of stem cells, with the understanding that only a tiny proportion of cells would engraft. Some researchers have started transplanting the cells in mixed populations or supported in gels or glue in order to improve retention. Others have genetically enhanced or exposed cells to hypoxic conditions (“preconditioned” them) to improve homing and survival in the unforgiving ischemic environment.[13] Timing, too, plays a crucial role; transplantation too soon after MI, in the setting of massive inflammation and apoptosis, may result in poorer engraftment.[14],[15]

In order to choose among the infinite combinations of cells, dose, delivery routes and timing, researchers must perform more direct comparisons of the interventions. These would be greatly aided by development of methods to reliably track and assess the fate of transplants, which is a difficult task in human subjects. If, in fact, the stem cells work by exerting paracrine effects, then knowledge of their behavior and interaction with other players (cytokines, growth factors, RNAs etc) will facilitate therapeutic refinement.

As with most first-in-class therapeutic research, the data supporting stem cells for IHD is messy, unclear, and evolving. Studies showing improvement in surrogate endpoints (LVEF, LVESV, NYHA Class) without any appreciable adverse effects are encouraging. However, definitive assessment of will require larger studies conducted over the long-term and powered to assess clinically relevant endpoints (mortality, quality of life) with reproducible results.