Life and Limb: Battlefield Medicine from WWII to Today 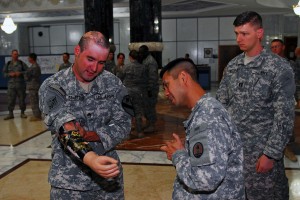 Mr. O is a 93-year-old man with a past medical history notable for severe Alzheimer’s dementia and amputation of the left upper extremity secondary to wounds received in WWII who was brought in from his nursing home with fever and dyspnea for two days.  His physical exam was notable for inspiratory crackles at the right lung base.  His CBC was notable for an elevated WBC with left-shift and a chest x-ray revealing a right lower lobe infiltrate. He was treated empirically for health care-associated pneumonia with antibiotics and was subsequently discharged back to his nursing home.

“I’m going to apologize in advance for my father.  If he starts cursing at you it’s not just the dementia, he’s always been like that.”  I had called Mr. O’s son to let him know of his father’s admission, but also to find out all the things about Mr. O that he – trapped in the end stages of dementia – was unable to tell me himself.  With a preface like that, I knew I was in for an interesting conversation.  As the phone call progressed, his son spoke with an impressive frankness, describing his conflicted feelings regarding a man he described as a “prototypical 1950’s father” – a provider dedicated to his family, but also an emotionally cold, functioning alcoholic.  However, while I left the conversation with a much clearer picture of who my patient had been before dementia robbed him of much of his identity, what stuck with me most was a detail his son had dropped seemingly off-handedly – that Mr. O had lost his arm fighting in the Battle of the Bulge.

Hanging up the phone, I was struck for the umpteenth time by how unique an experience it is to work at the VA.  Here was a man, now approaching the end of his life, who fought in one of the most iconic battles of a war that for my generation exists more as a legend writ large in film and literature than as a historical event.  And not only had he fought, but he had sacrificed an arm, and spent the next 70 years living his life and raising a family with a constant physical reminder of the battle and its consequences.  I couldn’t help but wonder – what was it like to lose an extremity during WWII, and how might things have been different if Mr. O had suffered his injury in a modern warzone instead of on the battlefields of Europe in 1945?

One the biggest differences for Mr. O would have been the speed in which he received care in the immediate aftermath of his wounding.  As military medicine has evolved over the 20th and now 21st century, there has been incredible progress in optimizing the delivery of care.  During WWII, the average time between a soldier being wounded and the initiation of first aid was 5 hours, while the average time to initiation of surgery was 15.2 hours.[1] In comparison, a soldier wounded during the Iraq war would have been almost immediately resuscitated by a trained combat lifesaver, evacuated to a battlefield surgical center staffed with vascular and orthopedic surgeons within 90 minutes, and then ultimately flown to a US military hospital for definitive repair within 3 days.[2]

Of course, another critical difference would be in the quality of care Mr. O would have received.  Since WWII, a vast number of advances in the fields of vascular surgery, microsurgery, and infectious disease among others has allowed for the reconstruction of limbs that previously would have required amputation.[3] During WWII, 49.6% of amputations among US troops were primarily attributable to vascular injury, a number that dropped to 20.5% by the Korean War and has continued to decrease since.2 From an infectious disease perspective, WWII was well underway before the first patient was successfully treated with penicillin in 1942, and in fact the D-Day invasion in 1944 marked the first time antibiotics were used in the treatment of US troops in any significant quantity.2  In comparison, modern troops are able to receive focused, culture-guided antibiotic therapy with a wide array of drugs, though it is worth noting that multidrug-resistant organisms have been a significant cause of morbidity and mortality among US troops in Iraq and Afghanistan.[4]

However, while decreasing rates of mortality from extremity injury in every war since WWII reflects the effectiveness of these advances in care, rates of amputation have paradoxically increased.[5]  This phenomenon can be primarily accounted for by two factors.  On one hand, the aforementioned improvements in care mean soldiers who in the past would never have survived their wounds are now able to be saved, yet may still require amputations.6  On the other hand, the increasing use of powerful explosive weaponry means soldiers are suffering more severe wounds than in the past, with the extremities disproportionally affected as a result of the commonplace use of body armor which protects the torso but leaves the extremities vulnerable.[6]

I will likely never know the exact scenario under which Mr. O lost his arm.  Yet given the fact that he survived his wound – despite the aforementioned deficiencies in available care – and did so without any other apparent injury, it is easily possible that with the benefit of modern medical care, his arm could have been reconstructed rather than amputated.  However, the Catch-22 is that if he had been fighting on a modern battlefield, his wound almost certainly would have been more severe.  Ultimately, the history of battlefield medicine is in many ways the story of the constant struggle between modern medicine and modern warfare, a metaphorical arms race arising as the inevitable consequence of a literal arms race.