Tales of Survival: Fury and Forgiveness in the ED 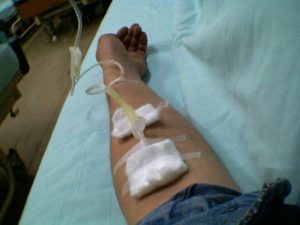 “She refused the ultrasound!” my resident announced with exasperation, updating our attending on 17-year old, pregnant Mariana[1], who arrived four hours ago with abdominal pain and an unpleasant attitude that rubbed nearly everyone wrong way.

We could hear the crescendo of Mariana’s expletives from the hallway, as patient transport wheeled her back into our Emergency Department. “That bitch tried to stick a wand inside me!” she yelled out, to no one in particular, to everyone around her. “You all keep me waiting for four fucking hours with this damn needle in my arm and don’t tell me nothing. I’m going home.”

Part of me immediately felt empathetic to Mariana’s concerns, even if not to her attitude. As our team’s medical student, I had interviewed Mariana extensively, learning that she was not only a “G2P1,” but also a parentless, single mother living in poverty with her infant son, struggling to complete high school, and constantly fighting off bullies in her neighborhood. Mariana led a complex, stressful life. This ED visit was becoming just another complication.

In Mariana’s defense, her ED visit was a frustrating accumulation of many small, unintended errors. Our Adult ED delayed her initial intake because she was still, technically, a pediatric patient. Once triaged, her blood pressure was somehow overlooked despite a history of pre-eclampsia during her first pregnancy. Our OB/GYN and Radiology consults had received mixed messages about her needs, resulting in a 3-hour delay on her imaging. When it finally came time for ultrasound, no one had communicated to Mariana which images were needed and why. Understandably, her attitude soured as the delays—and oversights—piled up.

I approached her stretcher cautiously, with only a few minutes before the clerk came for her signature and she left against medical advice.

“What happened?” I asked gently, wanting to create space for expression and, ideally, resolution.

I expected Mariana to confide in me as she had a few hours before, when we scrolled through photos of her son and her boyfriend on her cell phone, and she spoke of career aspirations and dreams for her future.

But this was not the Mariana of hours ago. Instead, her now stony, swollen eyes refused to make contact with mine. “Get this damn thing outta me, now,” she demanded, scratching at the IV in her arm.

Suddenly, I was no longer Mariana’s trusted confidante.

In the shadow of her anger, I had become just like all the other white coats around her. “You people here are terrible,” she scolded, her insult most intentional. “You don’t know what the hell you’re doing.”

A surge of disappointment instantly welled up inside me, as I tried to stay outwardly stoic. My mind buzzed with defensive negativity: How ungrateful! Her insults felt unreasonable, in the context of what I knew to be good intentions, even if unfulfilled, on the part of our care team.

But then, the real root of my uneasiness emerged: anger not so much with Mariana as with myself.  I was upset with myself because I sensed I had lost Mariana. In failing to communicate I let our connection unravel, failing her needs as well as my duties. It was in this moment that I had to pause, as words of caution from a past mentor came to mind; “Hurting people hurt people.” Mariana was, understandably, hurting; she was completely alone. And she did what most of us do when we’re lonely; instead of pulling people closer to us, we paradoxically push them farther away.

That night, I almost let Mariana push me away.

Rather than react to Mariana’s accusation, perpetuating the cycle of hurt, I paused. I stepped back. I forced myself to freeze the emotional whirlwind, and let it subside. What came streaming into the calm was a reminder of my underlying desire to be in the ED in the first place: I pursued medical education so I could build a career in serving others. Heal the hurting. Accompany those who are alone. If I reacted to Mariana’s anger with only further negativity towards myself, how could I channel compassion to her, or to other patients?

A few moments later a nurse came by to remove her IV—and, unhelpfully, scold her for charging her phone in the hallway. I restarted our conversation by offering her a power outlet in the reception area, walking alongside her to the door. “Do you want my phone in the meantime to call anyone?” I offered. Mariana’s face softened, slightly. “Nah, it’s fine,” she said, with a heavy sigh. “My boyfriend isn’t picking up. I’ll just have to go find him.”

Her struggle stung my conscience; it was nearly midnight, the wind chill had dropped to below freezing, and she was venturing out in a thin fleece jacket, pregnant and alone, unsure of her destination. I scribbled down my phone number and insisted that she call if she needed anything. Our ending was unhappy, but we departed, at least, on a note of connection rather than misunderstanding.

True connection—deep empathy—is admittedly difficult to achieve amidst the stresses of practicing medicine. We don’t want our patients to be poor communicators, and yet in our daily rush we may treat patients with hurried, unclear language. We don’t want our patients to do anything ‘against medical advice’ and yet our limited resources may give us no choice but to keep patients waiting in hallway stretchers, longing for far more ideal treatment. How do we begin bridging these gaps and treating our patients with greater humanity?

Mariana showed me one answer in the inextricable link between patient care and physician self-care. If we wish patients would have more understanding toward our imperfect caregiver circumstances, we must first extend greater kindness to our patients and their struggles. But it is only when we then forgive ourselves, as physicians, for not being perfect in every challenge, that we can begin extending the same compassion to our patients.