From the Archives – Fever: Friend or Foe? 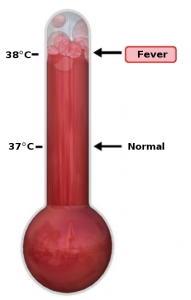 Please enjoy this post from the archives, dated November 20, 2013

When flu season returns, we will all see patients with sniffles, aches and a mild to moderate fever. History, tradition and habit have made the treatment of fevers almost automatic; however, how many of us pause and consider evolutionary principles before recommending acetaminophen for a fever? Could fever have an adaptive function? Are we sure we are doing more good than harm by recommending antipyretics?

To most patients and doctors, having a fever, with its cycle of chills, warmth, and sweats, is the hallmark of illness. Antipyretics provide a temporary relief from this discomfort, and appear to be part of the cure. It may come as a surprise to some that the combined analgesic/antipyretic action of all common fever remedies (acetaminophen, aspirin, paracetemol, and non-steroidal anti-inflammatory drugs [NSAIDS]) is something of an accidental occurrence due to the historical success of aspirin.[1] Not all flu discomfort is caused by fever and it is likely antipyretics would not be used so liberally if they were not effective at alleviating pain.

Fever has been viewed as an indication of illness, as a sign of healing, and as an illness itself.[2] In contemporary Western society, fever is understood as an immune response to a pyrogen. It is a symptom of infection, a view that can be traced to Carl Wunderlich, who published the first systematic study of human temperature.[3] Only fevers that are very high, prolonged, or occur in infants or critically ill patients are generally regarded as dangerous in their own right. Good clinical reasoning mandates that we identify and treat underlying causes, not signs. By informing a flu patient that it is simply unnecessary to suppress the fever with drugs, we must also convey that the fever is not what is making him or her sick. So, if it is neither good nor bad, why not take the acetaminophen?

Evolutionary principles can be helpful to explain to the patient that fever may actually be beneficial, that it could be a sign that the body is working to heal itself. Given the high metabolic cost of fever, it is unlikely that it would have evolved and been conserved so widely among animals if it did not have adaptive value, i.e., if it did not contribute to reproductive fitness. This is a good illustration of the value of considering evolutionary explanations, along with proximate explanations, in understanding disease (see this blog’s previous discussion of proximate vs. evolutionary explanations).[4]

Four conditions of a biological system must be met for natural selection to shape a trait in a population. All four are met for thermoregulation and fever:

1. More organisms are born than can survive

2. Individuals in the population vary with respect to the trait in question

3. This variation in the trait is heritable, at least in part

4. Reproductive success is correlated with variation in this trait

The hypothalamus, our biological ‘thermostat,’ is capable of receiving and integrating homeostatic signals to maintain temperature within a narrow range. In proximate, mechanistic terms, a fever is an elevation in the body’s thermoregulatory set-point in response to pyrogenic agents. Pyrogenic cytokines act on the hypothalamus through receptors to stimulate changes in the set point.

Three endogenous cytokines, interleukin-1ß (IL-1ß), tumor necrosis factor (TNF), and interleukin 6 (IL-6) act on the cytokine receptors of vascular endothelial cells in the dorsomedial and paraventricular nuclei of the hypothalamus. In addition to endogenous cytokines, exogenous bacterial lipopolysaccharide (LPS, or ‘endotoxin’) has also been shown to stimulate the hypothalamus via toll-like receptors and induce similar changes observed with pyrogenic cytokines.[5]

The hypothalamus responds to these chemical signals by producing prostaglandin E2 (PGE2). An increase in PGE2 raises the thermoregulatory set-point. [6] This change signals the central and peripheral nervous systems to turn energy into heat by inducing endocrine, autonomic and behavioral changes.[7] We feel cold as the body attempts to match the higher hypothalamic set point. Until the fever ‘breaks,’ it is often experienced as an oscillating rise and fall in temperature around the homeostatic set-point. This uncomfortable oscillation accounts for the subjective experience of a fever during a cold. Antipyretics work by blocking PGE2 synthesis at various levels, depending on the agent.

Fever is a highly regulated process and a very primitive trait, found in exothermic and endothermic vertebrates, as well as in some invertebrates.[8] Compelling evidence that fever can serve to help the host fight off invading pathogens was first provided by a 1975 study of desert iguanas (Dipsosaurus dorsalis) with induced acute bacterial infections.[9] Lizards, as ectotherms, have only behavioral means of thermoregulation at their disposal (we endotherms have both physiological [e.g., shivering] and behavioral means [e.g., pulling out another blanket]). In this study, all infected iguanas that actively raised their body temperatures by moving into warm light survived the infections, whereas individuals that were prevented from seeking a warm environment grew sicker and died. A similar effect has since been found in numerous other ectotherms.

The elevated temperature of a febrile host is detrimental for growth, and even lethal, to many bacteria and viruses.[8, 10] Elevated body temperature can restore optimal membrane conditions in cells disturbed by infection, facilitating the immune response.[11] Plasma iron levels decline (shift to ferritin) during these cytokine-mediated phase reactions, suppressing bacterial reproduction.[12,13]

Even if it is not beneficial (i.e., adaptive) in every case, an evolutionary perspective may still be helpful in deciding how best to respond to fever in clinical situations. We should not expect a clear-cut adaptive story from every evolutionary explanation.

Fever is a non-specific, acute-phase response that behaves stereotypically and, as such, is available when it is really needed[8]—what Nesse has dubbed the “smoke detector” principle of host defense mechanisms.[14] Nesse uses a control systems approach to explain how the regulation of optimal defenses occurs. The simplest model applies to all-or-none defenses—like vomiting. These mechanisms are typically deployed when the cost of the defense is fixed, is lower than that of potential harm, and the possibility of harm is uncertain. As with smoke detectors, false alarms are an integral part of the regulation of an optimal defense mechanism.[15] The system is calibrated to minimize false negatives.[16]

Fever, however, is not an all-or-none response; it is a variable, graded response. In this model, the cost of a fever increases in fixed amounts within a range, while the cost of harm from the threat decreases exponentially.[15] Thus, an increase in temperature by one degree from 99°F to 100°F offers greater benefits than an increase from 103°F to 104°F. At a lower temperature range, the cost of harm decreases more rapidly than at higher ranges. A high body temperature can cause disastrous consequences, including death. This leads to exponential increases in cost when these consequences become more likely. The model offers a good explanation that accounts for the low treatment threshold in very high fevers and describes why body temperature is highly regulated.

Regarding treatment, a number of studies with laboratory animals have found that morbidity and mortality decrease when fever is allowed to run its course without antipyretics.[8, 10, 17] The drop in plasma iron concentration confers synergistic benefits, and there is also evidence that generalized ‘sickness behavior’ (loss of appetite, lethargy, etc.) is itself an adaptive part of the immune response.[18] Because of familiar ethical and practical difficulties, rigorous research on the outcomes of antipyretic/anti-inflammatory drugs has not been conducted in human clinical trials. [19, 20]

Ultimately, mitigating fever with medication will probably not be harmful in most situations. But it is unclear if antipyretics have any survival value and their routine use in populations with fever may lead to excess morbidity. Further research is needed to determine when allowing fever to run its course is the best option; when it should be treated; and how different antipyretics interact with the body’s own defense mechanisms.[21]

Taking a minute to explain to our patients that their fever is an adaptive response, honed by eons of natural selection, may help them and us weigh the pros and cons of antipyretics.

Julia Hyland Bruno is a PhD student in Biopsychology and Behavioral Neuroscience at Hunter College and the Graduate Center, City University of New York

2. Gensini GF, Conti AA. The evolution of the concept of ‘fever’ in the history of medicine: From pathological picture per se to clinical epiphenomenon (and vice versa). J Infect. 2004;49(2):85-87.

3. Wunderlich CA. On the temperature in diseases: A manual of medical thermometry. Translated from the second German edition by WB Woodman. London: The New Sydenham Society, 1871. http://books.google.com/books?id=3-wHAAAAIAAJ&lpg=PA406&ots=97AShZovlv&dq=fever%20wunderlich&pg=PP1#v=onepage&q=fever%20wunderlich&f=false

4. Schwartz MD. Evolution and Medicine: Practicing medicine with only half of biology? Clinical Correlations, August 5, 2009. https://www.clinicalcorrelations.org/?p=1670.