Is There Really a Link between Asthma and Reflux? 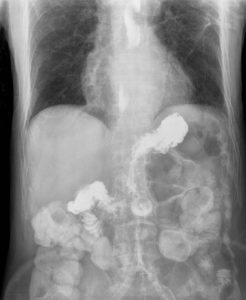 There is little doubt that an association between asthma and gastroesophageal reflux disease (GERD) exists. However clinicians have debated the nature of this relationship for decades. Asthma and GERD are among the most common disorders encountered by physicians, with prevalence in the general population estimated at 8%1 and 10 to 20%2 respectively. Studies have shown that up to 80% of asthmatics have symptomatic GERD3 and that people with GERD are nearly1.2 times more likely to have asthma.4  This may in fact be an underestimate as symptomatic heartburn is absent in 40 to 60% of asthmatics,5 while ambulatory esophageal pH monitoring can detect abnormal acid reflux in up to 88% of asthmatics.6 There are multiple biologically plausible theories to explain the connection between GERD and its extra-esophageal manifestations such as asthma.5 The controversy lies in an inability of research to date to demonstrate neither a causal relationship between the two disorders nor that treating one positively benefits the other.

Scientists have proposed two mechanisms by which GERD may exacerbate asthma. In the reflux theory,5 microaspiration of gastric and duodenal contents refluxed into the esophagus causes chronic pulmonary inflammation mediated by numerous proinflammatory cytokines.7 This leads to airway hyperresponsiveness and increased airway resistance. This theory is supported by studies using esophageal and tracheal 24-hour pH probes to correlate episodes of reflux with subsequent tracheal aspiration and decreases in pulmonary function.8 The second theory—the reflex theory—attributes the relationship between GERD and asthma to a shared vagus nerve enervation of the esophagus and bronchial tree.5 Direct experimental acidification of the distal esophagus has been shown to activate a vagally-mediated esophagobronchial reflex leading to bronchoconstriction.9

There are also 2 proposed mechanisms by which asthma can exacerbate GERD symptoms. First in asthma bronchial obstruction and the increased intrathoracic pressure associated with coughing have been shown to increase the frequency of transient lower esophageal sphincter (LES) relaxation.10 Next, asthma medications such as theophylline11 and beta agonists12 relax all smooth muscles including the LES, thereby exacerbating GERD.

An additional concern is that reflux of non-acid gastric contents may contribute to asthma pathogenesis. This can now be detected with impedance monitoring—the use of a probe to detect reflux of contents into the esophagus regardless of pH. Alternatively, dual probe monitoring can be used to detect pH and impedance simultaneously. Studies show that impedance monitoring can detect nonacid reflux in up to 37% of patients with symptomatic GERD on therapy.13 Caution must be used in interpreting this data since evidence suggests that impedance monitoring in patients on proton pump inhibitors (PPIs) does not correlate with traditional off-therapy markers of severe reflux such as esophageal acid exposure and presence of hiatal hernia.14

Investigators have tried for many years to identify the effect of GERD treatments on poorly controlled asthma; however, no consistent outcomes have been elucidated. Anti-reflux treatments have not proven to consistently improve lung function, asthma symptoms, nocturnal asthma, or the use of asthma medications. Problems with early studies included small sample size, short duration of study, and significant variation in asthma definition, intervention, and measurement of outcomes.4,5

More recently, a 2006 study by Kiljander et al15 randomized 770 patients with moderate to severe persistent asthma despite treatment with inhaled corticosteroids (ICS) to receive either esomeprazole 40 mg twice daily (BID) or placebo for 14 weeks. Patients were stratified by presence of GERD and/or nocturnal respiratory symptoms. The results were of borderline clinical significance. Only those patients with both symptomatic GERD and nocturnal asthma showed statistically significant improvement in a single outcome measure, peak expiratory flow (PEF) rate. The total improvement was 8.7 L/min in the morning (P = .03) and 10.2 L/min in the evening (P = .012). In a subgroup analysis this benefit was most notable in subjects taking long-acting beta agonists (LABA) in addition to ICS. To put these results into perspective, the minimal patient perceivable improvement in PEF has been shown to be 18.79 L/min.16 Kiljander et al15 concluded that patients with the most difficult to control asthma, indicated by use of LABAs and presence of nocturnal symptoms, benefit most from PPI therapy if they have symptomatic GERD.

In a 2010 follow up study, Kijander et al17 randomized 961 patients with moderate to severe asthma and symptomatic GERD to 26 weeks of treatment with omeprazole 40 mg daily, omeprazole 40 mg BID, or placebo. Results revealed no statistically significant differences among groups in terms of PEF, asthma exacerbations, or asthma symptoms. However treatment with both daily and twice daily dosing was associated with a small improvement in the forced expiratory volume in 1 minute (FEV1) (mean difference, +0.09 L, P = .0039 and +0.12L, P < .0001 respectively). Again the clinical significance of these results are unclear due to the small treatment effect.

The above studies only included asthmatics with symptomatic GERD. Up until this point a large randomized controlled trial (RCT) of patients with poorly controlled asthma and no symptoms of GERD had never been performed. In addition these studies did not incorporate objective confirmation of acid reflux, usually measured using the gold standard 24-hour esophageal pH monitoring. However, it should be noted that this method has notoriously poor correlation with symptoms, with 1 study finding that only 51% of asthmatics endorsing symptomatic GERD had abnormal acid reflux on pH monitoring.6

In 2009 Mastronade et al18 randomized 412 subjects with poorly controlled asthma despite ICS and no reported symptoms of GERD to receive esomeprazole 40 mg BID or placebo for 24 weeks. They conducted ambulatory 24-hour pH monitoring on all subjects and detected GERD in 40% of participants. They did not find any significant treatment benefit with respect to all outcomes including asthma symptoms, rate of exacerbations, nocturnal awakening, pulmonary function tests, and asthma-related quality of life. In addition, ambulatory pH monitoring did not find a subgroup of patients with silent GERD who would benefit from PPI treatment. The logical conclusion from this study is that poorly controlled asthmatics should not receive empiric PPI therapy if they do not have symptoms of reflux.

In light of this new evidence, a 2011 meta-analysis19 examined 11 RCTs (2524 patients) investigating PPI therapy in asthma. Pooled results of these studies showed a small but statistically significant improvement in morning PEF (mean difference, 8.68 L/min, CI 2.35–15.02, P = .007); however, there were no significant effects on evening PEF, FEV1, asthma symptoms, or asthma-related quality of life. In a subgroup analysis, studies specifying GERD diagnosis as an inclusion criteria had a significantly larger improvement in morning PEF (mean difference 16.91 versus 6.21 L/min, P = .006).  Once again the authors of this meta-analysis concluded that that while statistically significant, the small improvements demonstrated are unlikely to be of any clinical significance.

Pulmonologists and gastroenterologists seem to agree in their interpretation of the complicated relationship between asthma and GERD. The updated 2014 American Thoracic Society guidelines state that “clinical trials with anti-reflux therapy generally show little to no effect on asthma control” and do not recommend routine empiric use of PPIs in poorly controlled asthmatics unless GERD symptoms alone warrant treatment.20 The most recent American College of Gastroenterology guidelines21 recommend high-dose PPI for an 8-week trial only in asthmatic patients with symptomatic reflux. For patients without symptoms of reflux, investigations into other etiologies of poor asthma control are recommended instead of empiric treatment with acid-reducing medications. Dual probe monitoring may be used to further evaluate asthma patients who may have extraesophageal GERD. This is most useful for ruling out GERD, because ambulatory monitoring demonstrating reflux in the absence of symptoms does not establish GERD as a causative factor [21].

In summary, there is no doubt that asthma and GERD are intricately related. Despite numerous theories linking the two common disorders, the evidence has yet to define the nature of this relationship. Large studies have repeatedly shown small and inconsistent benefits of empiric PPI therapy for asthmatics with symptomatic GERD. A single large study has shown no benefit for treatment of asthmatics without symptomatic GERD.18 Many questions remain, including: Which asthmatics will benefit most from aggressive GERD treatment? Who should be referred for invasive gastroenterology testing such as dual-probe monitoring? How do we interpret the results of this testing? Future large prospective RCTs are warranted to investigate these important clinical questions.