From the Archives: The Prevention of Post-ERCP Pancreatitis 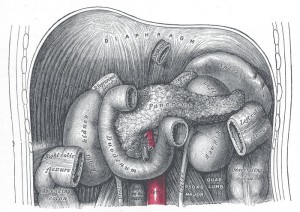 A 61-year old male with chronic epigastric discomfort presented to the emergency room with severe abdominal pain radiating to his back. He had similarly presented and been hospitalized two weeks prior to this admission at an outside hospital, where he underwent endoscopic retrograde cholangiopancreatography (ERCP) with placement of a pancreatic duct stent. His pain initially improved, but quickly recurred after discharge. Admission labs showed only mild leukocytosis with slight elevation in serum lipase. Computed tomography (CT) of the abdomen revealed a pancreatic duct stent associated with peripancreatic fat stranding, edema, and heterogeneity of the gland. He was admitted for management of post-ERCP pancreatitis, and the clinical questions arose: how common is this complication and how can it be prevented?

Endoscopic retrograde cholangiopancreatography (ERCP) combines endoscopy with fluoroscopy to visualize and treat problems in the upper gastrointestinal tract including the hepatobiliary tree and pancreas. There are several complications associated with ERCP, including pancreatitis, bleeding, cholangitis, cholecystitis, and perforation. Pancreatitis is the most common complication, with an incidence of 3.5% in all patients undergoing ERCP. It is usually mild or moderate in severity, but can be severe and potentially fatal in as many as 10% of cases [1]. Given the significant morbidity and healthcare expenditures associated with acute pancreatitis, much effort has been spent devising methods to anticipate and prevent its occurrence.

Various risk factors have been identified as contributors to the development of post-ERCP pancreatitis (PEP). These include both patient- and procedural- related elements (as summarized in a meta-analysis in 2003). “Definite” risk factors include suspected Sphincter of Oddi dysfunction (adjusted odds ratio 4.09), female gender (OR 2.23), prior pancreatitis (OR 2.46), precut sphincterotomy (OR 2.71), and pancreatic injection (OR 2.2). Sphincter of Oddi dysfunction (SOD) had the highest odds ratio of the definite risk factors, and was further noted to have a pooled incidence of PEP of 10.3% versus 3.9% in patients without SOD dysfunction. Several other “likely” risk factors exist, including younger age of patient, non-dilated extrahepatic bile ducts, biliary balloon sphincter dilation, failure to clear bile duct stones, higher number of cannulation attempts, pancreatic sphincterotomy, absence of chronic pancreatitis, and normal serum bilirubin levels. Of these, biliary balloon sphincter dilation appeared to have the strongest association with a pooled incidence of PEP of 9.3% versus 1.9% [2]. Presence of multiple risk factors synergistically increases the risk of PEP. This data enables the identification of patients with a high likelihood of PEP development so that additional energies can be concentrated on preventative measures for that population.

A number of strategies have been employed to reduce PEP. The most well-known among these are pancreatic duct stent placement and peri-procedural non-steroidal anti-inflammatory drug (NSAID) administration. Several studies have shown that pancreatic duct stent placement relieves PEP, most likely by offsetting the hindered ductal drainage caused by post-procedural papillary edema or Sphincter of Oddi dysfunction [3]. A 2007 meta-analysis evaluating the efficacy of pancreatic stenting looked at four randomized prospective trials and determined that there was a 12% absolute risk reduction of PEP (OR 0.44) in high-risk patients (primarily female with SOD) with pancreatic duct stent placement compared to those without stenting [4]. Thus, pancreatitis is prevented in one of every eight patients treated with a ductal stent. This benefit to stenting however is dependent on operator expertise and ability to place the stent without complication. Failure of appropriate stent placement has been associated with a subsequent incidence of PEP as high as 65% [5]. Further complications associated with successful pancreatic stenting include stent occlusion, spontaneous migration, and provocation of anatomic change to the duct or parenchyma [6]. Stents are placed with the goal of natural passage out of the ductal system within a few days, but if this does not occur an endoscopy is required to remove them. Pancreatic duct stents can decrease the incidence of severe PEP cases, but are not fail-safe and may lead to added expenditure and morbidity if placed incorrectly or if another endoscopy is required for their removal [7]. For this reason, prophylactic pancreatic duct stent placement is deemed cost-effective in patients at high risk for PEP but not in those with low or average risk.

Over the past decade, rectally-administered NSAIDs have shown promise as a safe, straightforward, and economical alternative for all patients undergoing ERCP regardless of level of risk. Prevention of PEP is thought to arise from NSAID-induced inhibition of phospholipase A2, cyclooxygenase, and neutrophil-endothelial interactions – all of which contribute to the pathogenesis of pancreatitis [8]. Rectal administration is favored because it allows for a more complete and rapid bioavailability than the oral route. The results of four randomized-controlled trials dealing with rectal NSAID use were assessed in a 2008 meta-analysis, which surmised that prophylactic rectal indomethacin administration prevented pancreatitis in 1 out of every 15 patients treated, and was not associated with any definable adverse events [9]. Additional confirmatory high-quality trials were suggested to solidify these results prior to widespread implementation of the technique.

A follow-up randomized, double-blind, placebo-controlled trial was published in the New England Journal of Medicine in 2012. The study assessed over 600 patients undergoing ERCP who were at “high risk” for post-ERCP pancreatitis based on the patient- and procedural- related factors identified above. Enrolled patients met one or more “major” criteria (clinical suspicion of SOD, prior PEP, pancreatic or precut sphincterotomy, greater than 8 cannulation attempts, pneumatic dilatation of biliary sphincter, ampullectomy), or had two or more “minor” criteria (age less than 50 years and female sex, 2 or more prior episodes of pancreatitis, 3 or more contrast injections into the pancreas with at least one in the tail, opacification of pancreatic acini, pancreatic duct brushing for sample acquisition). Adverse events aside from the primary endpoint of post-ERCP pancreatitis and secondary endpoint of moderate-to-severe PEP included gastrointestinal bleeding, perforation, infection, renal failure, allergic reaction, myocardial infarction, cerebrovascular accident, and death. All patients underwent endoscopy with possible placement of pancreatic duct stent and then were administered two 50mg-indomethacin suppositories or two placebos. At least 80% of the study population received pancreatic duct stents. Some patients were not stented because of difficulty with placement or access, but the observed benefit of indomethacin was consistent across all patients. PEP developed in 16.9% of patients in the placebo group, and only 9.2% of patients in the rectal indomethacin group (absolute risk reduction 7.7). Thus, treatment of 13 high-risk ERCP patients with rectal NSAIDs will prevent one episode of pancreatitis. Subsequent stratification showed indomethacin reduced risk of PEP from 16.1% to 9.7% in patients who did receive a pancreatic stent, compared to reduction in PEP from 20.6% to 6.3% in non-stented patients. Indomethacin administration was further beneficial in that it reduced the incidence of moderate-to-severe pancreatitis from 8.8% to 4.4%. The only adverse events noted at 30-day follow-up were clinically-significant bleeding (4 patients in the indomethacin group and 7 patients in the placebo group) and acute renal failure (2 patients in the placebo group). None of the bleeding events required surgery, angiography, or more than 2 units red cell transfusion. Based on this study, single-dose rectal NSAID administration was concluded to safely and significantly reduce PEP [10].

Despite these results, a paradigm for prophylactic rectal NSAID use was still not established, in part because no studies at the time could demonstrate that rectal NSAIDs were more efficacious than temporary pancreatic stents. A recent meta-analysis published in 2013 takes this into consideration, and extrapolates results from 29 studies to compare prophylactic rectal NSAIDs to pancreatic duct stents in reducing PEP as the outcome of interest. Three therapeutic options were assessed: rectal NSAIDs alone, pancreatic duct stents alone, and rectal NSAIDs in conjunction with pancreatic stents. All three interventions displayed significant benefit over placebo, with rectal NSAID use alone showing the largest significant risk reduction (OR 0.24, 95% CI 0.14-0.42). Risk of pancreatitis was also reduced with stents alone and with both interventions combined (OR 0.50 and OR 0.41, respectively) [11]. Comparative analysis data revealed no significant benefit to a combination of pancreatic duct stent with rectal NSAIDs, measured against either intervention alone. NSAID administration is less technically-demanding and had little association with adverse events as well. These results are not sufficient for changing guidelines given that they are surmised from the meta-analysis data rather than by direct head-to-head comparison of the varying interventions. However, they imply that rectal NSAIDs alone as a primary preventative approach may be the most effective means of reducing post-procedural pancreatitis in patients undergoing ERCP.

In summary, there is high-quality data to support the use of both prophylactic pancreatic duct stent placement and rectal NSAID administration in prevention of post-ERCP pancreatitis. Pancreatic duct stent placement is effective in reducing PEP, but the main benefit is derived from preventing development of severe PEP in high-risk patients. Stents are associated with greater morbidity than rectal NSAIDs and are a more costly option, so placement should be reserved for the appropriate high-risk patients. NSAIDs comparably reduce incidence of PEP and have shown efficacy in both average- and high-risk populations, so at present are a reasonable consideration at the time of ERCP in patients without contraindication [12].