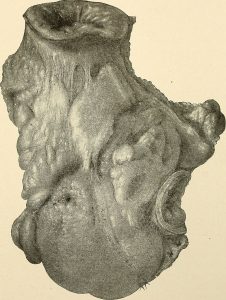 An 89 year-old woman with a history of chronic constipation was admitted for several weeks of severe constipation and abdominal bloating. On initial exam, she exhibited abdominal distention but had minimal abdominal tenderness. Initial CT imaging demonstrated a significant stool burden with prominent colonic distension extending from the cecum to the transverse colon. She had no flatus and required nasogastric tube decompression, with several days of laxatives, scheduled enemas, and attempts at manual disimpaction. Conservative management was unsuccessful at relieving her constipation. Frequent enemas and an aggressive bowel regimen continued.

On hospital day 6, the patient complained of a dull left groin pain. Serial abdominal exams continued to be unremarkable. However, after several hours she became increasingly lethargic and hypotensive. At this time, physical examination revealed crepitus extending from the left groin to below the left knee despite an abdominal exam which continued to lack rigidity, tenderness, or guarding. Repeat CT imaging revealed subcutaneous and deep thigh soft tissue emphysema extending from the retroperitoneum likely originating from a colonic perforation. An emergent surgery consultation was made; however, the patient and family elected not to pursue surgical intervention, opting instead for comfort measures. The patient expired early the next morning.

In the practice of clinical inpatient medicine, there can be an over-reliance on waiting for the development of a “surgical abdomen” before seeking an urgent surgical evaluation. This case demonstrates one example of a medicine patient with an uncommon presentation of a common surgical emergency — a colonic perforation presenting without classic abdominal peritoneal signs. Colonic perforation can occur in various conditions treated on the medicine wards including but not limited to diverticulosis, colonic neoplasms, inflammatory bowel disease, stercoral perforations in elderly patients, and direct instrumentation of the colonic mucosa in procedures such as colonoscopy. Some medications such as NSAIDS and steroids have also been associated with an increased incidence of diverticular perforations [1].

When the colon perforates, it spills colonic contents into surrounding sterile anatomical compartments. In contrast to spontaneous bacterial peritonitis which is commonly monomicrobial, secondary peritonitis is predictably polymicrobial. A small perforation releases more than 400 unique bacterial species into the surrounding space [2]. Very quickly, this number is reduced to several dominant species. Escherichia coli and Bacteroides fragilis are most common and have been shown to grow synergistically in their new extra-colonic environment [3]. The bacteria and their accompanying endotoxins promote the influx of complement and both innate and adaptive immune cells, with the subsequent production of pro-inflammatory cytokines TNF-α, IL-1, and IL-6 [4].

This progression of symptoms related to intraperitoneal inflammation, for example, is evident in a typical presentation of appendicitis. In early stages of appendicitis, the visceral innervation of the appendix causes the patient to experience poorly-localized abdominal pain that generally refers to the peri-umbilical region. As the appendix becomes further inflamed and edematous, the poorly localized pain worsens as the appendix expands into contact with the visceral peritoneum, also innervated by visceral nerves. However, the patient’s pain eventually evolves into severe, localized, right lower quadrant pain as the inflammatory process spreads outward to the overlying somatically innervated parietal peritoneum. Patients with this characteristic evolution of symptoms are often spared further diagnostic workup in favor of immediate surgical intervention before the appendix perforates.

However, there are exceptions to this typical progression of symptoms after an intestinal perforation, as seen in the case above. An understanding of colonic anatomy is key to understanding alternate presentations of a colonic perforation.

When it comes to colonic perforations, the transition zones between intraperitoneal and extraperitoneal segments are the most vulnerable to perforation by instrumentation. The transitions between ileum and cecum, and between the distal descending and sigmoid colons, are the most common sites of iatrogenic perforations during colonoscopy [8]. Though rare, rectal perforations distal to the middle valve of Houston leak intrarectal contents and air into the extraperitoneal pelvis. Air travels down pressure gradients along fascial planes, potentially causing pneumoscrotum and subcutaneous emphysema of the lower extremities. In the case above, it is believed that repeated insertions of a plastic enema nozzle may have led to the rectal perforation that resulted in the patient’s deep tissue thigh emphysema.

In the presence of suspected bowel perforation, either with intraperitoneal or extraperitoneal findings, CT imaging of the abdomen with water soluble contrast is most often the diagnostic test of choice if the patient is stable enough to undergo the study. CT imaging of areas with crepitus, if present, will also help to establish the presence of subcutaneous air [9].

Bowel perforation is typically a surgical emergency; resection of the perforated bowel is needed to gain source control of evolving sepsis. Broad-spectrum antibiotics should be started to cover common intracolonic organisms. Markers of systemic inflammation such as tachycardia, hypotension, fevers, elevated lactate, and leukocytosis, along with exam findings of perforation may lend credence to taking a patient to the operating room without further workup.

Colonic perforation is a potential complication of numerous conditions treated on the medical floor, and requires the emergent assessment for possible surgical intervention. For patients who are known to be at risk for a perforation, there may be an over-reliance on focusing solely on the development of a “surgical abdomen” as a sign of perforation. The case above illustrates extra-peritoneal findings of a colonic perforation in a patient with a benign abdominal exam.