From the Archives: How Much Do We Know About HDL Cholesterol? 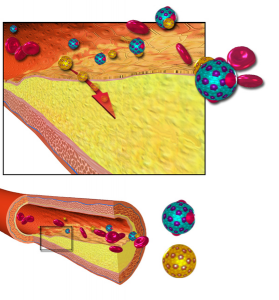 As levels of HDL cholesterol increase, rates of heart disease go down. It’s this fact that has given HDL its reputation as the “good cholesterol,” serving a crucial role in reverse cholesterol transport. According to our models, HDL ferries cholesterol away from our arteries – where its buildup leads to heart disease and stroke – and back towards our liver, safely out of harm’s way. The epidemiology backs this up: people with higher levels of HDL tend to have a lower risk of heart disease.[1] But why don’t pharmacologic efforts to raise HDL cholesterol reduce morbidity and mortality from heart disease the same way that statins do? As more data on HDL-raising efforts are published, both scientists and the popular press [3] are beginning to eulogize the end of the HDL hypothesis. So how can we reconcile these discordant pieces of evidence? To answer that question, we must take a look at what the data tell us on the role of HDL in heart disease.

Cholesterylester transfer protein (CETP) transfers cholesterol from HDL to the atherogenic particles of VLDL and LDL, making it a promising target for drug development. Indeed, the initial studies on CETP inhibitors showed that their administration raised HDL cholesterol while simultaneously lowering LDL cholesterol. On paper, it sounded like a win-win. And then the medical world was shocked in 2006 when Pfizer was forced to halt phase III trials of torcetrapib, a CETP inhibitor, after it was shown to increase mortality by 60% when prescribed in conjunction with atorvastatin, compared to atorvastatin alone. [5] Pfizer spent over $800 million on their failed HDL raising attempt. [6] Some suggested that the mortality increase was due to adverse effects such as raising blood pressure. However, subsequent data analysis found that torcetrapib also failed to stop the progression of carotid intima media thickness, [7] further confirming its lack of efficacy in halting or reversing atherosclerosis. Another CETP inhibitor, dalcetrapib, was tested in the dal-OUTCOMES study and found to have no reduction in cardiovascular events despite earlier trials confirming its seemingly positive impact on HDL and LDL cholesterol levels. [8]  The previous failures of CETP inhibitors on improving cardiovascular outcomes have not deterred pharmaceutical companies from pursuing this mechanism of disease prevention, as both Merck and Lilly are both optimistic that their own medications in this class will lead to better outcomes. [9]

Nicotinic acid, also known as vitamin B3 or niacin, raises HDL by as much as 35% by reducing cholesterol transfer from HDL to VLDL and by delaying HDL clearance. [10]  Several trials have evaluated the effect of niacin on cardiovascular outcomes. The HATS trial evaluated the effect of simvastatin plus niacin and found not only a rise in HDL levels but a regression of atherosclerotic lesions as well as reduced incidence of coronary events. [11] This trial did not compare niacin plus a statin to statin alone, however, so the marginal benefit of raising HDL could not be tested. The ARBITER 6-HALTS study looked at statin plus niacin versus statin plus ezetimibe and found regression of carotid intimal media thickness for patients taking niacin plus statin versus progression for the other group. [12] Similar to HATS, the marginal benefit of raising HDL on top of statin use could not be evaluated. In addition, this was an open label trial, so blinding was not preserved. The AIM-HIGH trial, published in 2011, aimed to settle some of the questions about isolated HDL raising therapy on top of patients who were already receiving statins. This study investigated the effect of niacin versus placebo on patients already taking statins. [13] AIM-HIGH was terminated after finding no incremental benefit for raising HDL with niacin on top of statin therapy.[14] And recently, the HPS2-THRIVE study found no benefit when adding extended release niacin plus laropiprant to background statin therapy. [15] The evidence for niacin is clearly mixed, but it should be noted that no study has shown an additional outcome benefit from the addition of niacin to statin therapy. It’s interesting to note that while niacin may increase HDL cholesterol levels, it does not improve the functioning of HDL particles. [16] If adding niacin to therapy does not increase cholesterol efflux from the vessels, it makes intuitive sense that there would be no disease modifying benefit from its addition. This research also suggests that there may be more to the HDL story than simply increasing the amount of cholesterol it carries.

Given the paucity of evidence that pharmacologic HDL raising treatments have any clinical benefit, many have asked the question of whether high HDL is actually protective against heart disease or whether it is simply a marker for some other mechanism of decreased risk. In 2012, Voight et al published a Mendelian randomization paper in the Lancet that investigated whether genetic polymorphisms that raise HDL also protect against heart disease. The authors found that the genetic mechanisms that raise HDL do not seem to protect against heart disease. [17] When you synthesize the results of this study with the previously discussed data, it calls the currently proposed mechanisms of HDL’s protective effect into question.

In a previous Clinical Correlations post, [18] the benefit of measuring lipoproteins instead of cholesterol as a means of assessing heart disease risk was discussed. It appears that measuring apolipoprotein B is a better measure of cardiac risk than simply measuring LDL. The reason for this has to do with the mechanism of heart disease: atherosclerosis is the result of subendothelial penetration of an apoB containing particle that stimulates inflammatory cell recruitment and oxidation/phagocytosis of the offending particle. The reason measuring apoB is a better assessment of risk is that LDL is simply a measurement of the amount of cholesterol contained in the particles – it says nothing about how many particles there are. However, since HDL doesn’t always have 1 apolipoprotein per particle like LDL, VLDL, and Lp(a), measuring apolipoproteins isn’t a simple solution. In addition, the protective role of HDL is not just measured by the number of HDL particles: the smaller the HDL particle (i.e. the less cholesterol it contains), the better its anti-atherogenic activity. We should also note that HDL does more to fight atherosclerosis than simply participate in reverse cholesterol transport. HDL protects against LDL oxidation, it is anti-inflammatory, [20] it promotes maintenance of endothelial function, and it may even interfere with thrombosis. [21] And a higher number of smaller HDL particles does seem to be protective against cardiovascular disease. [22,23] Investigation into a apoA1-Milano, a mutated variant of the apolipoprotein in HDL found in some Italians has further complicated our understanding of HDL’s role in atherosclerosis. Patients with this variant of apoA1 tend to have lower risk of coronary disease even though they have lower HDL-C and higher triglycerides. [24] And testing the intravenous administration of apoA-1 Milano into post ACS patients found regression of coronary plaques after five weeks. As the role of HDL in heart disease is further investigated, it becomes clear that assessing its role is more complicated than can be measured by simple HDL cholesterol measurement.

The research we have on the pharmacologic manipulation of HDL raises more questions than it answers. There are several areas to investigate before we should move on from attempting therapeutic intervention on HDL. How do these interventions affect HDL particle size and, perhaps more importantly, HDL particle function? What impact do these interventions have on HDL particle number? Are CETP inhibitors and niacin simply increasing the amount of cholesterol carried by HDL, and thus confounding our efforts to measure their effect? Investigating methods of simply raising the cholesterol carried by HDL particles may well be barking up the wrong tree. It’s clear from epidemiological data that high HDL is protective against heart disease. It’s also likely that both HDL particle number and particle function are better markers of this protective effect than the cholesterol carried by these particles. But there is much research to be done before we are able to provide our patients with a real benefit from intervening on their low HDL numbers. We advocate that investigators in this area not hang their “HATS” on the research to date and “AIM-HIGH” for a possible therapeutic intervention that increases HDL particles or improves their functioning.