How to Interpret an Elevated Lactate on the Inpatient Wards 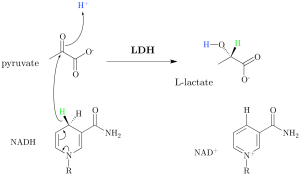 The concept of lactate is frequently on the tip of the tongue or top of the to-do list in the hospital setting. As a new hospitalist, I am frequently discussing with house staff the clinical significance of this molecule and how to interpret its elevation.

What is lactate, anyway? Lactate is a hydroxycarboxylic acid that is produced or removed by a reversible oxido-reduction reaction catalyzed by the enzyme lactate dehydrogenase (LDH), which is located in the cytosol of human cells. In humans, approximately 65% of plasma lactate is derived from glucose, and 16-20% is derived from alanine; it is the end-product of the metabolic pathways that break down these molecules. Once produced, lactate is cleared when it is oxidized in the cytosol into pyruvate, which is then shuttled to the mitochondrial matrix for further metabolism. In healthy humans, lactate doesn’t accumulate because, in the various tissues and organs (from the heart to the liver to skeletal muscle to human blood cells), all is balanced and the reversible reaction described above favors lactate clearance [1].

However, this does not always happen. Classically, we think of lactate as evidence of end-organ hypoperfusion, or shock, and lactate monitoring plays an immensely important role when it comes to prognostication and risk assessment in these situations. However, in this article, we explore how hyperlactatemia can be viewed in the context of other medical problems and the interesting alternative pathophysiology that produces lactate elevations in these settings.

Before we dive in, it is important to touch on the large body of literature that exists on how blood gases are processed. Though the jury is still out on many of the pre-analytical variables—glass vs plastic syringes, storage on ice vs at room temperature, use of a pneumatic tube system vs hand transport of samples, effect of a tourniquet—it is uncontested that cellular metabolism continues even after a blood sample is collected, and this may lead to an increase in lactate [2, 3, 4, 5]. To prevent skewing of values, guidelines state blood gasses should be analyzed within 30 minutes of collection [2].

In patients with asthma:

Though the association between severe acute asthma and elevated lactate has been described in the literature for decades, recent research suggests this phenomenon is much more common than initially reported.  Per a 2014 review, prospective observational studies have found that between 50% and 80% of adult and child patients in the emergency room with this problem present with a lactate level above 2.2 mmol/L [6].

Multiple factors contribute to the elevated lactate seen in the setting of acute severe asthma. These include excessive muscle work, the use of beta-agonists for treatment, and the counter-regulatory response to respiratory alkalosis [7, 8, 9].

Though all organs produce lactate, muscle is the largest generator of the molecule. In asthma, as well as other conditions in which hyperventilation occurs, respiratory muscles are overworked because of increased inspiration and expiration. This excess work can contribute to the elevated lactate observed. Interestingly, in studies that looked at the association between acute severe asthma and hyperlactatemia, an inverse association between lactate and phosphate levels exists. The hypophosphatemia is believed to precede the hyperlactatemia, which likely reflects respiratory muscles undergoing an increased rate of glycolysis and using up phosphate stores [9].

In addition, many studies have confirmed a relationship between the beta-2 agonist therapy used in asthma and elevated lactate. Though the definitive mechanism is incompletely understood, many theorize that albuterol may potentiate the adrenergic state already associated with asthma. This heightened adrenergic state leads to increased lactate production through up-regulation of glycolysis and increased pyruvate production, increased lipolysis-mediated inhibition of pyruvate dehydrogenase, and stimulation of B2-receptors and subsequent increases in substrate for glycolysis [10]. Though exceptions exist, the hyperlactatemia associated with treatment of asthma is usually not accompanied by a metabolic acidosis, and the observed lactate elevation in this condition is not associated with worse outcomes [6, 8].

In patients with liver dysfunction:

The liver is the primary organ responsible for lactate clearance, and liver dysfunction can disrupt this function [7]. Much of the literature on this subject focuses on hepatic dysfunction in patients with sepsis, frequently in those who are critically ill. A study published in 1999 looked at patients with acute circulatory failure and the effect of hepatic dysfunction on lactate levels. Though there were no differences in other variables including lowest systolic blood pressure, serum creatinine, and simplified acute physiology score, lactate levels were significantly higher in the group with liver disease (8.24 mmol/L vs 4.29 mmol/L; P < 0.001), and a positive correlation was found between lactate and AST levels (R = 0.55; P < .001) [11]. Given no difference in the clinical parameters noted above, the authors ruled out a correlation between liver dysfunction and severity of shock as a possible confounder their results.

In a 2015 study of 187 patients undergoing early sepsis resuscitation, researchers studied the effect of liver dysfunction on lactate normalization. The patients were stratified based on the extent of liver disease (no liver disease, mild liver disease, or cirrhosis). The authors noted cirrhotic patients had higher baseline lactate levels and that advanced liver disease was associated with impaired lactate clearance and normalization [12]. Of note, this did not translate into a statistically significant difference in mortality.

Taken together, it appears that when lactate levels are elevated for another reason, liver dysfunction inhibits its clearance; however, it is unclear if hyperlactatemia can be solely attributed to liver dysfunction.

In patients with kidney disease:

Following the liver, the kidney is believed to be the major lactate-consuming organ in the body, and thus, kidney function should be taken into account when investigating an elevated lactate value [16]. In fact, in a letter to the editor responding to the 1987 Kruse article described above, Guerin and colleagues wrote that, since renal insufficiency leads to lactate accumulation, differences in kidney function between the two described groups might have confounded the findings [17].

In exogenous lactate infusion studies in rats, dogs, and sheep, the kidneys have been found to be responsible for the removal of 20-30% of an exogenous load, mostly via metabolism but also via excretion at higher lactate loads.  In nephrectomy studies in the same cluster of mammals, the half-life for lactate elimination increases from 5.3 to 7.1 minutes after nephrectomy was performed [16].

In patients with diabetes (on metformin):

Lactic acidosis is an often-cited adverse effect of metformin therapy, though it was much more common occurrence with earlier generations of bigaunides which are no longer in use. The mechanism of this side effect is complex but, in part, involves the inhibition of oxidative phosphorylation in the mitochondria and aerobic respiration. The earlier bigaunides are more lipid soluble than metformin and can more readily cross the mitochondrial membrane, and thus, more meaningfully cause this problem [19].

Overall, MILA is an entity that can exist in the setting of metformin overdose or when metformin accumulates secondary to a concomitant condition, such as kidney failure. Otherwise, hyperlactatemia should not be attributed solely to metformin therapy, and other etiologies should be explored. Notably, in DKA elevated lactate levels are also found, often secondary to hypovolemia or accumulation of D-lactate.

In patients with alcoholism:

Lactic acidosis can develop in patients with both acute alcohol intoxication as well as chronic use. On a cellular level, the oxidation of ethanol decreases the NAD+/NADH ratio, which subsequently shifts pyruvate towards lactate.  In 2005, Zehtabchi et al published a study aimed to answer whether ethanol can explain the acidosis commonly seen in ethanol-intoxicated patients. The study found that ethanol intoxication was associated with a higher lactate level (mean difference: 0.69 mmol/L; 95% CI, 0.11 to 1.27 mmol/L) [23].  Further, studies with healthy volunteers have also shown a predictable rise in plasma lactate after ethanol ingestion. Still, given the modest increase in lactate ethanol causes and the frequent co-morbidities that exist with alcoholism, it is important to rule out other causes of elevated lactate when hyperlactatemia is seen in hospitalized patients with alcohol use.

Though it is imperative to not lose sight of the relationship between lactate and hypoperfusion, the above highlights some of the prevalent conditions seen in the hospital setting which may contribute to an observed elevated lactate. The list is incomplete, as additional causes of lactate elevation, including seizures and malignancy, are also common. Further, with all of this said, practitioners should also be aware of an opposing phenomenon—an entity in which sepsis-induced hypotension is observed in the absence of lactatemia [24]. Overall, lactate values should not be interpreted in a bubble, and if a lactate value is obtained, its thoughtful interpretation is always indicated.

Dr. Rebecca Lazarus is a hospitalist at Bellevue Hospital and instructor in clinical medicine at NYU Langone Health.