FROM THE ARCHIVES – The Yolk or the Egg 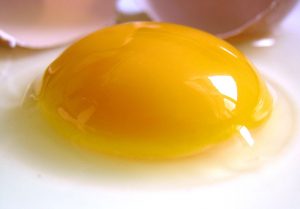 By Nicole A. Lamparello, MD and Molly Somberg, MD, MPA

Please enjoy this post from the archives dated February 27, 2014

You hear it wherever you eat, whether at the deli ordering a breakfast sandwich or at the diner for Sunday brunch, “Egg whites only, please.” For the last decade, there has been a strong movement toward avoiding egg yolks; instead people are opting for only the ‘healthier’ egg white when ordering or cooking their breakfast.

However, are egg whites truly ‘healthier’ than eating whole eggs? What is the basis for this decision being made at breakfast tables throughout the country?

The ‘egg-white movement’ surfaced out of a concern for the high cholesterol level found in egg yolks. An egg yolk contains 185 mg cholesterol, which is approximately 66% of the daily-recommended value of cholesterol [1]. Elevated low-density lipoprotein cholesterol (LDL) has been identified as a major risk factor for coronary artery disease (CAD). According to the lipid hypothesis, elevated serum cholesterol can penetrate the arterial wall of coronary arteries, becoming trapped, and then circulating white blood cells engulf cholesterol, resulting in the accumulation of lipid-laden white blood cells. This sets forth a series of events, which causes local injury, cell death, calcification, and the development of a ‘fibrous cap’ over the atherosclerotic plaque. If the cap ruptures, blood clots and blocks the artery, causing a myocardial infarction (MI) [2].

Given this presumptive mechanism of cholesterol consumption leading to CAD, dietary guidelines to prevent heart disease emphasize the reduction in dietary cholesterol to less than 300 mg per day [3]. Several studies have found evidence of this association between dietary cholesterol consumption and CHD. In a study of 514 Western Australian Aborigines, a 2.6-fold increased risk of CHD was reported in individuals consuming 2+ vs. < 2 eggs per week after 14 years [4].

In another large study of over 10,000 men and women in the UK, Mann et al. found an association between egg consumption and increased mortality. After adjustment for age, gender, smoking status, and socioeconomic status, the authors found that consuming 1-5 eggs per week led to a statistically significant death rate ratio of 128, which means that there was a 28% increase in the death rate in this sub-population of individuals consuming between 1 to 5 eggs per week versus the sub-population who consumed less than 1 egg per week on average. However, it should be noted that this was a study of health individuals in which the mortality from CAD was less than half of what would be expected in the general population in the UK at the time [5].

Despite this strong evidence of an association between egg consumption and CAD, several recent studies have challenged the notion that egg consumption carries an increased risk of CAD. The Health Professionals Follow-up Study and the Nurses’ Health Study examined approximately 118,000 men and women without cardiovascular disease, diabetes, hypercholesterolemia, or cancer at study onset. After adjustment for age, smoking status, and other potential CAD risk factors, the authors found that there was no difference in the relative risk for CAD between those who consumed <1 egg/week and those who ate >1 egg/day [6]. However, in subgroup analyses, higher egg consumption appeared to be associated with increased risk of CAD among diabetics. The authors hypothesize that this may be because cholesterol consumption in diabetics leads to a shift in a diabetic’s lipid profile towards smaller, denser LDL particles, which are thought to be more atherogenic. Finally, in the 2008 Physicians’ Health Study, 21,327 participants were followed for 20 years. Results supported the previous studies and showed no evidence of an overall significant association between egg consumption and incident MI or stroke[7].

There are no studies comparing the health of people who eat whole eggs to those who simply eat egg whites, however, it should be noted that the yolk contains the most nutrients in the egg [1]. The yolk contains the fat-soluble vitamins A, E, D and K. Specifically, the yolk contains 41 IU of vitamin D, a vitamin that approximately 25-75% of Americans are deficient in [8]. Vitamin D is crucial for bone and muscle health and immune system function. The yolk is also full of minerals including: calcium, copper, iron, phosphorus, zinc, thiamin, vitamin B5, B6, B12 and folate [1]. Egg yolks are also an excellent source of carotenoids, particularly lutein and zeaxanthin. Carotenoids accumulate in the back of the eye and appear to protect against age-related macular degeneration [9]. Finally, egg yolks contain docosahexaenoic acid (DHA), a long-chain omega-3 fatty acid, and arachidonic acid, a long-chain omega-6 fatty acid. Preliminary evidence shows that these fatty acids are anti-inflammatory, cardio-protective and may even have an anti-cancer effect [10].

On the other hand, egg whites contain far fewer nutrients, although the white is useful as an added source of magnesium, sodium, and niacin [1]. Egg whites are often praised for its high protein content, however, the yolk is actually responsible for half of the protein in the egg. While egg whites are low in calories (~17 calories/egg), it seems the beneficial effects of the yolk outweigh the cost of a 59-calorie yolk. .

So, the question remains, “How should I order my omelet?”

Missing out on the egg yolk means missing out on the nutrition in your breakfast. Although the yolk is high in cholesterol, most studies agree that consumption of up to one egg per week is unlikely to have a substantial impact on the risk of CAD or stroke among healthy adults. However, be careful when ordering an omelet, as it can have 3 or more eggs, and these larger portions may mean excess calories and weight gain, thus the benefits of the egg yolk may be lost. Also, since the data is still inconsistent, dietary suggestions for patients with cardiovascular disease, diabetes, severe risk factors, or a family history of premature atherosclerosis, should err on the side of caution. Much like other foods, when eaten in moderation, eggs, the white and the yolk, are a safe, nutrient-rich, and delicious source of fuel for the body.

2. Steinberg D. Thematic review series: the pathogenesis of atherosclerosis. An interpretive history of the cholesterol controversy, part V: the discovery of the statins and the end of the controversy. J. Lipid Res. 2006; 47 (7): 1339–51.  http://www.ncbi.nlm.nih.gov/pubmed/16585781