Blood On Your Hands: What’s The Point of Glucose Self-Monitoring in Non-Insulin Treated Diabetes? 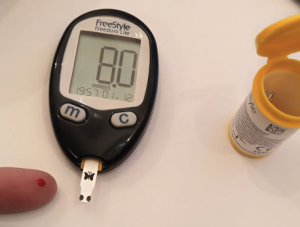 Mr. H is a 71-year-old patient with uncontrolled type 2 diabetes mellitus (T2DM) who came in for his routine follow-up. He recently saw the podiatrist for some foot pain and is taking metformin and glipizide. “Did you bring your sugar log?” “No,” he said. “Have you been tracking it at home?” He laughed. “A few times a week, usually in the mornings. I don’t really like checking it because it hurts and it messes up my finger.” I had asked Mr. H if he checked his blood sugar because I figured that’s just what all diabetic patients are supposed to do. After our visit, I wondered if it even mattered.

Self-monitoring of blood glucose (SMBG) has traditionally been a core component of effective management of diabetes.1 Numerous studies support a strong association between SMBG testing and decreased A1c in patients with type 1 diabetes (T1DM).2,5 It has also been linked with good clinical outcomes in patients with T2DM on insulin therapy.3,4 SMBG testing provides insulin- dependent patients insight into their condition via real-time feedback on glucose responses to meals, exercise, and therapy, allowing them to avoid hypoglycemia, adjust their diet and medications, and take better control of their lives. Consequently, SMBG testing can be educational and empowering.  However, according to the CDC, of the 23 million US adults diagnosed with T2DM, only 30.8% use insulin (17.8% of whom combine it with oral agents). So what about the majority of adults like Mr. H who manage their diabetes with oral agents? What is the evidence to support SMBG testing in non-insulin-treated T2DM? The patient-centered benefits of SMBG testing in insulin-treated diabetes have been extrapolated to non-insulin- treated diabetes, but are the clinical outcomes as convincing?

In 2005, Diabetes Care published a systematic review by Welschen and colleagues evaluating the effects of SMBG testing in patients with non-insulin-treated T2DM.6 The overall effect of SMBG testing was a statistically significant decrease of 0.39% in HbA1c compared with the control groups. However, there were many caveats. Only six randomized controlled trials (RCTs) were included, and of the six, only two studies found a significant effect of SMBG testing on A1c.7,8 The two significant studies had 113 and 345 patients, respectively, in their intervention groups, whereas the other studies had 12–68 patients. Due to the small number of  RCTs, Welschen briefly looked at seven other nonrandomized controlled studies that met all of their other criteria on study population, intervention, and outcome measures. Only one of the seven trials found an improvement in HbA1c levels as a result of monitoring at least daily compared with less frequent monitoring.9

Seven years later, Malanda and colleagues published an update to the Welschen review.10 Six new randomized controlled trials were added to the previously mentioned six trials. A1c outcomes were evaluated in 2817 randomized patients: 2324 patients with 6-month follow-up and 493 patients with 12-month follow-up. Meta-analysis of studies including patients with diabetes duration of one year or more showed a statistically-significant SMBG-associated 0.3% decrease in A1c at up to 6 months follow-up; yet an overall statistically non-significant SMBG associated -0.1% decrease was seen at 12 months follow-up. In non-insulin-treated patients diagnosed with T2DM for at least one year, the Malanda results showed that whatever minimally beneficial effect SMBG testing had on A1c at 6 months was gone at 12 months.

The Malanda study has its flaws, however. As multiple critics have pointed out,11,12 SMBG testing is not a uniform intervention with standardized doses and protocols, it’s a tool. And like any tool, it’s not simply a matter of whether it’s used, but how it’s used. In a 12-month, prospective, cluster-randomized, multicenter study, Polonsky and colleagues recruited 483 poorly-controlled (A1c ≥7.5%) non-insulin T2DM subjects from 34 primary care practices in the US.13 Practices were randomized to an active control group (ACG, n= 227) with enhanced usual care or a structured testing group (STG, n= 256) with enhanced usual care and use of structured SMBG testing. Enhanced usual care included quarterly clinic visits that focused specifically on diabetes management, free blood glucose meters and strips, and office point-of-care A1c capability. The STG patients were given instruction on when to check their blood sugar, how to interpret the results, and what meaningful lifestyle modifications to make based on the results. STG healthcare providers received training on how to interpret the 7-point daily glucose profiles and were provided with an algorithm that described various pharmacological and lifestyle strategies that could be used in response to the specific SMBG result patterns identified. The results at 12 months showed significantly greater reductions in mean A1c in the STG compared with the ACG: −1.2% vs. −0.9%.

Preliminary results from a more recent study seem to be in agreement. Young and colleagues14 randomized 450 patients into 3 arms: 1) no SMBG, 2) once daily SMBG with standard glucometer feedback, and 3) once daily SMBG with enhanced personalized glucometer feedback. Groups 2 and 3 received training on how to obtain and interpret SMBG readings, and had the readings carefully reviewed at routine clinic visits. At 12 months, the A1c changes for groups 1, 2, and 3 were 0.04, -0.05, and -0.10 percentage points, respectively. The results from Polonsky, Young, and many others15 suggest that structured SMBG timing and frequency, clinician expertise and involvement in management, and patient education on what to do with the results need to be considered when assessing the true utility of SMBG testing. SMBG testing can improve sugar control in patients with T2DM, if coupled with training and education.

Of course, A1c isn’t the only number that matters. SMBG testing is expensive. In 2002, The Medicare B program for adults with non-insulin treated T2DM spent more than $465 million on testing supplies.16 How much more would a intensive, structured SMBG approach cost? Structured or unstructured, whatever clinical benefit SMBG testing might offer needs to be weighed against its economic cost. Germany, France, and numerous other healthcare systems around the world have already stopped covering SMBG testing for adults with non-insulin treated T2DM due to perceived insufficient benefit. It wouldn’t be crazy if we did the same.