The Definition of a Fever 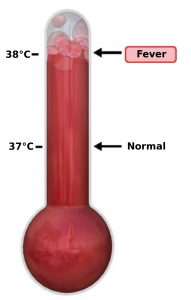 It is 7AM and the intern is chart rounding overnight vital signs. A middle aged diabetic patient who presented with an NSTEMI had a temperature of 99.5°F an hour ago. The intern moves on to the next patient, because 99.5°F is higher than normal body temperature, but it is not a fever so no intervention is needed… or is it?

A fever is arguably the easiest identifiable sign of illness. Worldwide and dating back thousands of years, laypeople and physicians alike recognize the correlation between fever and illness [1]. Although the general sense that a fever means an increase in body temperature is pervasive, the exact definition of a fever is an ongoing debate, as is its biological purpose [2].  The dictionary offers a vague definition of fever simply referring to a rise of body temperature above normal, but in medical practice, a temperature of 100.4°F or greater is generally considered a true fever[3].

The stringency with which this definition is upheld may depend on the clinical scenario. The CDC and WHO publically endorse this definition of a fever, however, the IDSA adds an additional qualifier in the case of febrile neutropenia, defining a fever as a temperature of 100.4°F or greater for at least one hour, or a single temperature of 101°F or greater [4–6]. This difference may be attributable to the goal of the definition – the CDC and WHO seek to identify persons with illness that may be subject to domestic or foreign quarantine, while the IDSA is guiding clinical practice in intensive care settings.  Remarkably, all three of these groups rely on the accepted cut-off of 100.4°F, although the evidence behind this number is not nearly as clear-cut as the pervasiveness of this definition would lead one to believe.

The commonly cited definition of a fever as a body temperature of 100.4°F or greater is attributed to an 1868 work by Carl Reinhold August Wunderlich. After analyzing over one million temperature readings from 25,000 patients, Wunderlich found that the average axillary temperature was 98.6°F [7,8]. He concluded that the temperature of a healthy person is maintained within a narrow range, rarely swaying more than 0.9°F from its baseline[8]. He also identified the upper limit of the range of normal temperatures in a healthy person as 100.4°F, and thus he defined a fever as any temperature above this threshold[8]. How Wunderlich recorded and analyzed this gigantic amount of data in an era before computers and statistical software is questionable at best, but over a century later, his definition is still largely accepted.

In recognition of the fact that modern temperature guidelines are based on this elderly data, Mackowiak et al set out to appraise the concepts published by Wunderlich. In a study of 148 healthy patients, they collected 700 temperature recordings and found a mean of 98.2°F, median of 98.2°F, and a mode of 98.1°F[7]. This study found that the maximum oral temperature in a healthy adult was 99.9°F and therefore concluded that any temperature above 99.9°F constitutes a fever[7]. Using this definition of a fever, the same group found that peak temperature during clinical illness with shigella was significantly related to the total number of signs and symptoms of the infection [9]. This finding questions the importance of establishing a firm temperature cutoff value; since higher values mean sicker patients, fever is a scale not a binary value.

Small and Clements conducted a retrospective cohort analysis in an emergency department, and after analyzing records for over 121,000 patients, found that an initial temperature of greater than 100.4°F on presentation to the ED had a >99% specificity for diagnosis of infection among adults [10]. However, using a threshold of 99.5°F increased the sensitivity of predicting infection without greatly impacting the specificity[10]. As such, they argue that the definition of a fever should be lowered to 99.5°F.  Still other sources argue that given the variability in the evidence, any rise in temperature greater than 1.8°F above the normal diurnal body temperature constitutes a fever and that this set point may differ from patient to patient and from morning to evening[11].

As if the confusion regarding the definition of a fever were not enough, there are exceptions to this already hazy definition, and in certain populations infected patients may not raise their body temperature. For example, the elderly sometimes have a blunted or delayed fever response, and infected elderly patients may not mount a true febrile response [12]. The pathophysiology behind this change in the fever response with age has yet to be thoroughly defined, however animal models suggest that decreased cytokine production may be responsible [13]. Other research demonstrates that patients with spinal cord injury also have physiologically blunted fever response due to autonomic dysfunction and paralysis, which causes an impairment in shivering, one of the body’s key mechanisms of raising the core temperature[14]. As a result, temperature does not elevate to the same extent that it would in healthy individual, and lower temperatures may be consistent with febrile responses in these patients[14].

Patients with spinal cord injuries are not the only neurological patients with disruption of the thermoregulatory response. Patients with subarachnoid hemorrhage and other primary brain injuries can develop an unexplained fever referred to as a central fever[15]. Central fevers are thought to be secondary to a disruption of the normal thermal regulatory pathways and represent an entirely different form of fever[16]. Additionally, heat stroke and hyperthermia are pathophysiologically different from a fever[16,17]. In these conditions, body temperature is elevated without a corresponding signal from the thermoregulatory pathways[16]. In contrast, fevers are elevations of body temperature that occur in conjunction with an increase in the hypothalamic set point[17].

Although perhaps one of the most widely accepted medical facts, the definition of a fever is based on data over one century old that has not been successfully recreated in the modern era of evidence based medicine. So, next time a patient has a temperature of 99.5°F, perhaps we should all be thinking more critically and investigating for other markers of systemic inflammatory response before considering that temperature to be a normal variant. After all, what is a fever?