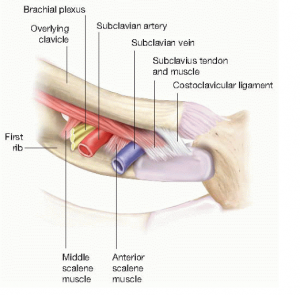 A healthy 53-year-old man presented with a 10-day history of left-sided neck and arm pain, and left arm swelling. On exam, pulses, strength, and sensation were unremarkable and symmetrical bilaterally. All laboratory studies were within normal limits. Ultrasonography with doppler showed several clots in the left subclavian, axillary, and brachial veins along with the right basilic and subclavian veins. Computed tomography scan (CT) demonstrated a pulmonary embolism at the bifurcation of the left lower lobe basal and lateral segmental arteries. His family history was remarkable for a niece with a documented heterozygous factor II mutation. He had a recent normal colonoscopy, never smoked, and no recent travel history. He worked full-time as an IT professional. A day before discharge, additional history gathered revealed that the patient plays guitar and volleyball multiple times a week. Adson’s test (loss of radial pulse with ipsilateral head rotation and neck extension) and other thoracic outlet provocative maneuvers were negative.

The etiology of the upper extremity deep vein thromboses (UEDVTs) was initially suspected to be genetic thrombophilia and the patient was placed on systemic anticoagulation. However, given the extensive clot burden and history of significant upper extremity use, primary UEDVT was also on the differential and outpatient follow-up with hematology and vascular surgery was arranged. While further hematology work-up failed to reveal any identifiable genetic thrombophilia, vascular surgery evaluation confirmed the diagnosis of effort thrombosis using provocative maneuvers and venous ultrasonography. Thrombolysis was not performed as the therapeutic window was likely to have closed.

UEDVTs account for approximately 4 – 10% of all DVTs and can lead to massive pulmonary emboli [1,2]. UEDVTs are divided into two types: primary and secondary, or unprovoked and provoked, respectively. Most UEDVTs are secondary or provoked, which means they are a result of a known inciting factor, most commonly instrumentation of the central veins or a prothrombotic state such as active cancer [3]. However, when no clear risk factor is identified, a diagnosis of primary UEDVTs must be considered [4].

Primary UEDVTs are known by several different names. As they are not secondary to instrumentation or other prothrombotic state, they are sometimes referred to as spontaneous [1]. They may be caused by a congenital or acquired anatomical compression of the veins at the thoracic outlet, which is, by definition, a venous thoracic outlet syndrome (venous TOS or VTOS) [4]. The resulting thrombosis was first described by Paget [5] and then by Schrötter [6], and historically they are thus known as Paget-Schroetter Syndrome [7]. And finally, given this pathology was often observed in otherwise healthy adults with a history of extensive use of their upper extremities, the term effort thrombosis is also used [4].

Despite all the different terms used to describe this condition, the pathophysiology is one and the same: anatomic compression of the subclavian vein at the thoracic outlet resulting in damage and stasis, and subsequent thrombosis. The compression tends to occur at the costoclavicular joint as a consequence of the narrow space created between the clavicle, the first rib, and the anterior scalene and subclavius muscles [4]. The subclavian vein exits the thoracic outlet more anteriorly than the brachial plexus and the subclavian artery, making it more likely to be compressed by a hypertrophied anterior scalene muscle and the costoclavicular ligament [8]. Because the subclavian vein is in a more vulnerable position compared to the rest of the neurovascular bundle, patients with primary UEDVTs/VTOS do not necessarily exhibit the typical physical exam findings associated with neurological or arterial TOS, such as those seen in the Adson’s test.

Primary UEDVTs are twice as common in men and usually present in the third decade of life. At least three-quarters of patients report a history of upper extremity effortful activities, and up to 40% endorse some kind of repetitive or prolonged activity that involves hyperabduction or external rotation of the shoulder [3,9]. As described in a review of primary UEDVTs by Illig and Doyle, clinical presentation tends to be similar to that of lower extremity DVTs – a swollen and painful limb and/or a pulmonary embolism. It usually develops in less than 24 hours and may also be associated with a sensation of heaviness and a bluish discoloration of the arm. If the DVT is chronic, the extremity can become collateralized with dilated superficial veins. As with lower extremity DVTs, duplex ultrasound is the diagnostic test of choice. If the study is inconclusive or an intervention is planned, venography may be indicated [4].

Timely recognition of primary UEDVT is crucial. Early (< 2 weeks) catheter-directed thrombolysis and anticoagulation with or without thoracic outlet decompression surgery has demonstrated to improve outcomes when compared to systemic anticoagulation alone. In a retrospective series of 626 patients, 96% of those treated promptly and aggressively with thrombolysis and thoracic outlet decompression experienced complete pain relief, could return to their employment in full capacity, and had no limitations with recreational activities; while only 29% of patients treated conservatively with anticoagulation alone achieved similar results [8].  Furthermore, patients treated conservatively are at higher risk of recurrence and developing of chronic venous insufficiency (ie post-thrombotic syndrome) [10].

Although primary UEDVTs are relatively rare, they can cause significant complications such as pulmonary emboli and post-thrombotic syndrome. They tend to present as an isolated venous thoracic outlet syndrome without any of the typical symptoms and physical exam findings associated with neurological or arterial forms of thoracic outlet obstruction. Prompt diagnosis is crucial as early aggressive treatment with anticoagulation and thrombolysis +/- thoracic outlet decompression has been shown to improve outcomes significantly.