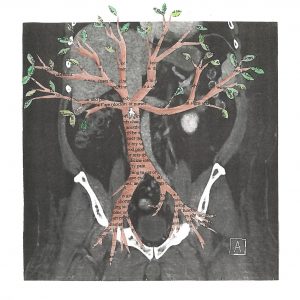 Case Description: The patient who inspired this visual work is a 57-year-old man who came to the hospital with 10 days of bilateral leg swelling and pain so severe that he could not walk. He has a past medical history of hepatitis C cirrhosis and coronary artery disease, for which he had a left-heart catheterization eight years ago. The latter was complicated by the formation of a pseudoaneurysm and subsequent DVT/PE. At that time, he was treated with four months of warfarin and placement of a non-retrievable IVC filter. At the current presentation, an abdominal CT scan showed thrombosis of his IVC, starting from his filter and extending down through his common iliac veins, external iliac veins, superficial and deep femoral veins, and popliteal veins bilaterally. Several days into his hospitalization, he was treated with a combination pharmaco-mechanical thrombectomy and balloon angioplasty to restore partial flow in his venous system.

Reflection: I spent the first few days of this patient’s admission trying to assuage his anxiety about his upcoming vascular procedure – which was expected to be technically complex – as well as his unclear long-term prognosis. Every time I entered his room, he told me about how he was afraid that he would not survive the procedure and that under different circumstances, he would never agree to a medical intervention with such a high mortality rate. However, he didn’t feel he had any other options. To counter his very real fear of losing his life and livelihood, I tried to give him hope. I reassured him over and over again that he was in good hands, that his pain would subside, and he would eventually walk again if his revascularization was successful. I viewed myself as a champion for modern healthcare, a role that was necessary given that he and I both recognized the iatrogenic nature of his condition; almost a decade ago, a healthcare practitioner – in whom he had entrusted his life – had inappropriately placed a non-retrievable IVC filter after a provoked DVT, and that was the seed for this life-threatening venous thrombosis. Reflecting back now, I realize that I was also trying to give myself hope and reassurance while staring at the face of someone who was harmed by his contact with the healthcare system. As someone who fully “buys in” to the miracle of modern medicine, it was a sobering reminder that even with a growing arsenal of medical knowledge, I can never know all of the long-term consequences of my actions on the lives of the people I treat.

I imagined this patient’s IVC filter as the seed for a tree growing in his venous system. The CT scan in the background is the patient’s scan from admission and the tip of his filter, which I envision as the heart of the piece, is visible through the tree trunk. The tree is formed out of an NYU procedure consent form because of how uncertain I felt that my patient could truly make an informed decision about the risks and benefits of this medical intervention, considering that he was acutely ill and had no other options.

Anna Hirsch is a medical student at NYU School of Medicine