Gamechanger(?): Apixaban to Prevent Venous Thromboembolism in Patients with Cancer 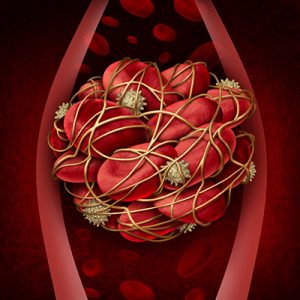 Gamechanger(?) focuses on potentially high-impact articles that often have the intention of changing practice. Given their usual high visibility, we use this opportunity to question their practical impact. This section also seeks out lesser known articles that may, in fact, have high practical impact, but haven’t risen to prominence. Gamechanger(?) is meant to be thought-provoking and controversial, always seeking out the tipping point for changes in our everyday clinical decisions.

Why does this matter?

It is known that outpatient chemotherapy treatment is associated with increased risk for VTE, as well as with increased risk of major bleeding [1]. The risks of both of these are clinically important, as they can lead to complications such as interruption of chemotherapy treatment, unnecessary hospitalizations, and even death [2]. Recent American Society of Clinical Oncology clinical practice guidelines recommend considering antithrombotic prophylaxis only in high-risk patients [3].

Multiple risk stratification models have been specifically designed for the purpose of identifying cancer patients at high risk for VTE [4]. The Khorana score has been validated for use in ambulatory cancer patients receiving chemotherapy; data required to calculate this score includes cancer type, pre-chemotherapy platelet count, hemoglobin level (or RBC growth factor use), pre-chemotherapy leukocyte count, and body mass index.

Several studies have investigated the safety and efficacy of VTE prophylaxis. The Cassini trial studied high-risk ambulatory patients with cancer and found that treatment with rivaroxaban showed neither a significant decrease in risk of VTE (or death from VTE) nor a significant increase in major bleeding events [5]. The PROTECHT trial found that nadroparin reduces incidence of thromboembolic events in cancer patients receiving chemotherapy, and the SAVE-ONCO trial had similar findings with semuloparin, with the additional finding of no apparent increase in major bleeding [6, 7]. Still, additional data is needed to help providers more confidently identify whether an individual ambulatory cancer patient undergoing chemotherapy would benefit from VTE prophylaxis.

The AVERT trial was a randomized, double-blind clinical trial, designed to test the efficacy and safety of apixaban 2.5 mg twice daily against a placebo control in an eligible population. Inclusion criteria required participants to have progression of known cancer after complete or partial remission and also be starting a new course of chemotherapy with a minimum treatment intent of 3 months. Other inclusion criteria included having a Khorana score of 2 or higher, an age of 18 years or older, and capacity sufficient to provide written informed consent. Participants were excluded if they had conditions that significantly increased their clinical risk for bleeding (including hepatic disease associated with coagulopathy and platelet count of less than 50,000 per cubic millimeter), certain cancers (skin, leukemia, myeloproliferative), a planned stem cell transplantation, a life expectancy of less than 6 months, or renal insufficiency with GFR less than 30 ml/min per 1.73 squared meters of body-surface area.

The study randomized a total of 574 eligible participants, of whom 291 were assigned to receive apixaban and 283 to placebo. 63.9% were found to have a relatively lower risk of clot (Khorana score = 2). Over 50% of participants had cancer types not well-represented in the Khorana score’s validation study, including lymphoma, myeloma, pancreatic, stomach and brain cancers, with lymphoma patients alone constituting >25%. Gynecologic cancers were the second-highest represented, also at >25%. The study featured two primary outcomes designed to measure the intervention’s efficacy and safety. The primary efficacy outcome was the first episode of objectively documented major VTE (i.e. proximal deep-vein thrombosis or pulmonary embolism) within the first 180 days (+/- 3 days) after randomization. The main safety outcome was major bleeding as defined by the International Society on Thrombosis and Hemostasis (i.e. bleeding associated with a decrease in hemoglobin level of 2 g per deciliter or more, leading to transfusion of 2 or more units of packed red cells, occurring in a critical site, or contributing to death) [8]. A modified intention-to-treat analysis was used, including participants if they had undergone initial randomization and received at least one dose of apixaban or placebo on or before day 180 (+/- 3 days).

What were the results of the study?

Are there any fatal flaws?

This study has some significant limitations. Concerning the researchers’ choice to use the Khorana score as part of their inclusion criteria, this model should be applied with caution to high-risk patients due to the poor positive predictive value (probability of VTE in those designated high risk, 7.1%) and poor sensitivity (probability of high risk in those experiencing VTE, 40.0%) of the Khorana score at the cutoff value of 3 [9]. Despite this known limitation, 36.1% of the AVERT trial’s apixaban group and 32.9% of its placebo group had Khorana scores of 3 or greater. Khorana et al also acknowledged in their original study that patients with cancers known to be strongly associated with VTE, including lymphoma, myeloma, pancreatic, stomach and brain cancers, were underrepresented when developing the Khorana score. Because of this, the score was acknowledged to have limited applicability to such patients. Yet, 54.6% of the apixaban group and 51.9% of the placebo group in the AVERT trial included patients with these cancer types.

In this study, receiving apixaban VTE prophylaxis was associated with a significantly decreased risk of VTE but also a significantly increased risk of a major bleeding episode at 180 days. However, without disease- and treatment-specific rates of VTE and major bleeding episodes, deciding whether an individual patient would benefit from VTE prophylaxis with apixaban is still somewhat unclear. Thus, this evidence is likely insufficient to lead to any specialty-wide shift in how providers approach the topic of VTE prophylaxis in ambulatory cancer patients.

Cancer patients are at increased risk of bleeding and clotting complications. The recent AVERT study, like its companion Cassini study, adds to the existing body of evidence supporting thromboprophylaxis in ambulatory cancer patients receiving chemotherapy who are at high risk of VTE. Clinical benefit is established for oncology patients at high risk for VTE with no increased risk for major bleeding. However, patient selection is critical. Which tumor types or chemotherapy regimens are most appropriate or should be excluded? There are important limitations. Certain tumor types are not well represented in the Khorana score. In addition, there are no well-validated bleeding risk scores for cancer-associated VTE on anticoagulants. Although the anticoagulant prophylaxis trials showed no increase in major bleeding, bleeding remains a concern in cancer patients. In general, bleeding rates in observational studies are higher than in RCTs due to patient selection.

It is likely the studies in the aggregate (AVERT, Cassini, PROTECHT, SAVE-ONCO) will be practice-changing [1,6,7,8]. However, widespread adoption will probably lag as institutions grapple with how to implement this in practice. The large cancer centers will likely lead in this effort and generate real-world experience that hopefully replicates the clinical benefit achieved in RCTs. However, cancer patients with significant renal or hepatic disease, thrombocytopenia, or history of bleeding will be excluded.

Jacqueline Heath is a resident physician at NYU Langone Health