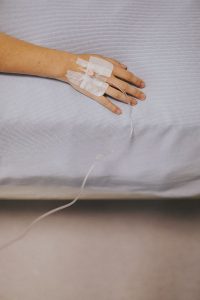 The 2014 ACC/AHA Guideline for the Management of Patients with Non-ST-Elevation Acute Coronary Syndromes (NSTE-ACS) recommends the use of IV morphine for persistent ischemic pain in spite of maximal anti-ischemic therapy, barring any contraindications to opioids [2]. It lists the level of evidence for this recommendation as class B, recognizing that no randomized controlled trials have been conducted to assess morphine’s safety and efficacy [2]. Morphine and other opioids, however, have been shown to reduce the antiplatelet effects and delay the absorption of oral antiplatelet agents, including clopidogrel [3].

This observational study sought to determine whether the use of morphine with clopidogrel in patients presenting with NSTE-ACS is associated with a higher risk of cardiac ischemic events. The authors performed a post-hoc subanalysis of the EARLY ACS trial [4]. Clopidogrel use within 24 hours before randomization and IV morphine use within seven days before randomization were recorded, allowing the authors to identify the 5,438 patients who were given clopidogrel, 88.7% of whom were not given IV morphine.

In patients treated with clopidogrel, morphine use was associated with higher rates of a composite outcome of death, non-fatal MI, and recurrent ischemia requiring intervention within 96 hours of presentation, with an adjusted odds ratio of 1.4 (95% CI, 1.04–1.87; p=0.026). The difference in rates of death or MI at 30 days was not statistically significant, but there was a trend for higher rates in the morphine group (adjusted odds ratio 1.29; 95% CI, 0.98–1.70; p=0.072). They also looked at patients treated with IV morphine, but not clopidogrel, and found that morphine was not associated with either outcome in this group.

While this study has the potential to impact clinical practice, it’s riddled with limitations. First, as this is a post-hoc analysis, there may be a number of unmeasured confounders that prevent a definitive causal relationship from being established. Second, this study only looked at patients with NSTE-ACS, for which the need for antiplatelet agents is debated, rather than patients with STEMIs. Lastly, there are many points of imprecision, including the timing of administration of either drug and how vastly different the two groups were in size. Therefore, it would be difficult to base any clinical decisions off of this one study, but it is a foundation for further research.

In the US, hospitals remain the standard setting of care for acute illnesses, but there are many disadvantages to inpatient care. For one, hospital care accounts for nearly 33% of national health expenditures [6]. Costs aside, studies have shown that our patients themselves are negatively impacted by their hospital stays in myriad ways: lengthy emergency room waits, elderly patients developing hospital-acquired infections, patients suffering from “post-hospital syndrome,” and many patients requiring readmission within 30 days of discharge [7, 8, 9, 10]. Given these findings, some developed countries are offering home hospital care, in which acute care services are provided in patients’ homes [11]. While these “home hospitals” are proposed to reduce cost, healthcare use, and readmissions – as well as improve patient experience – no US randomized controlled trials evaluated this until now [12].

This RCT of 91 patients admitted via the ED assigned them to receive either home hospital care (intervention) or traditional hospital care (control). Exclusion criteria included being considered as high risk for clinical deterioration based on validated algorithms. Patients included in the study tended to be elderly and frail, with the median ages of the intervention and control groups being 80 and 72, respectively. They also generally had strong emotional support and fair health literacy. Patients within the two groups had similar primary diagnoses.

The at-home group received daily visits from an attending internist, as well as an RN, and had access to respiratory therapy, PT/OT, certain specialists via telehealth, IV medications, and point-of-care testing. All patients were interviewed upon admission, discharge, and 30 days post-discharge. Researchers found that the adjusted mean cost of each episode was 38% lower in the home hospital group (95% CI, 0.24%–0.49%; p<0.001). Additionally, members of the at-home group had fewer tests done, spent less time sedentary, and were readmitted less frequently. Patients in both groups endorsed high satisfaction with their care and there were similar lengths of stay.

While this study does demonstrate the potential benefits of “home hospitals,” it does have some limitations. Its small size and selection for patients at low risk of clinical deterioration inhibit its generalizability. Also, given that it included a broad category of diagnoses, it was unable to evaluate disease-specific outcomes. Overall, it seems that it would be incredibly difficult to widely adopt this practice, as whether a patient can do well with home hospital care is likely dependent on a host of factors not analyzed by this study, including health literacy, at-home support, diagnosis, and disease severity. Home hospitals can be great, but likely only for certain patients. Specifically identifying those patients could be the next step.

Lipoprotein (a) reduction in persons with cardiovascular disease [13]

Based on growing evidence, elevated lipoprotein (a) is considered an independent genetic risk factor for cardiovascular disease [14]. Often, these patients cannot achieve lower LDL levels with established therapy, including PCSK9i, as lipoprotein (a) is co-measured with LDL cholesterol [15, 16]. There are currently no approved therapies to specifically lower lipoprotein (a). However, prior studies have shown that an agent directed against non-hepatocyte production of apolipoprotein (a) reduced levels in both healthy adults with elevated lipoprotein (a), as well as those with established cardiovascular disease [17]. Given that hepatocytes are the source of roughly 99% of plasma lipoprotein (a), a new agent, APO(a)-LRx, targeted against hepatocyte production, was shown to cause a dose-dependent reduction in lipoprotein (a) levels [18, 19]. This subcutaneous drug demonstrated a half-life of one month, leading the authors to conduct this randomized, double-blind, placebo-controlled, dose-ranging trial with longer dosing intervals.

This trial could signify a new, effective, and safe therapy for patients with cardiovascular disease unresponsive to traditional therapies. However, it is impossible to generalize the results of this trial, as 97% of patients were white. Therefore, more studies involving a diverse population would be needed, as well as studies on the longitudinal impact of lowering lipoprotein (a) levels on cardiovascular outcomes.

This multi-center, open-label, randomized clinical trial recruited 216 patients with septic shock from ICUs in Australia, New Zealand, and Brazil. Patients were randomized to the intervention group, receiving IV vitamin C, hydrocortisone, and thiamine, or to the control group, receiving solely IV hydrocortisone. Both groups received treatment until resolution of shock or up to 10 days. This study found no difference between the two groups in the duration of time spent alive and vasopressor-free up to day 7.

This double-blind, placebo-controlled phase 3 trial randomized 1,360 vitamin D-deficient patients to receive either a single PO dose of 540,000 IU of vitamin D3 or placebo within 12 hours of admission to an ICU. There was no significant difference in 90-day mortality between the two groups, nor was there an effect of baseline severity of vitamin D deficiency on the results.