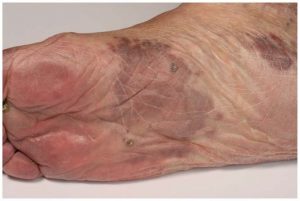 A 42-year-old man with AIDS (diagnosed in 2012, CD4 124 cells/mm3, non-compliant with anti-retroviral therapy (ART)) presented with shortness of breath, productive cough and worsening bilateral lower extremity swelling and pain for 3 months. The patient began experiencing bilateral lower extremity swelling and an increasing number of dark purple spots on his lower extremities a year prior to presentation. He took ART for approximately two weeks, discontinued them, and was lost to follow up until 2 months prior to presentation. He presented to an outside hospital where he underwent a skin biopsy confirming Kaposi’s Sarcoma (KS). He did not comply with ART, signed out AMA, and then re-presented with shortness of breath, a persistent productive cough, and pleuritic chest pain for 1 day. He was found to be febrile, tachycardic and mildly hypoxic on room air. Physical exam was remarkable for numerous hyper-pigmented, non-blanching macular and nodular lesions on bilateral lower and upper extremities, abdomen, chest, head and hard palate, and diffuse, bulky lymphadenopathy. CT chest/abdomen/pelvis was notable for multiple lytic bone lesions, diffuse lymphadenopathy, bilateral pleural effusions, and diffuse anasarca. Throughout his hospitalization, patient was maintained on ART. He underwent multiple thoracenteses for recurrent pleural effusions with pleural fluid analysis consistent with an exudative process. He had recurrent fevers despite two courses of broad-spectrum antibiotics and was pancytopenic, requiring multiple transfusions. Initially this was thought to be due to KS but there was concern for primary effusion lymphoma versus Castelman’s disease versus POEMS (polyneuropathy, organomegaly, endocrinopathy, multiple myeloma, skin changes), given recurrent pleural effusions, extensive lymphadenopathy and osteolytic lesions. Patient underwent multiple biopsies, which were consistent with KS and positive for human herpes virus-8 (HHV-8). It was ultimately determined that the patient had disseminated KS as opposed to other lymphoproliferative disorders.

Understand the history and pathogenesis of Kaposi’s Sarcoma:

Kaposi’s Sarcoma was first described in 1872 by Moritz Kaposi. It was originally thought to be a disease of predominately older males of Eastern European, Mediterranean or Jewish descent. There are four subtypes of KS: European or western (classic) KS, African (endemic) KS, KS associated with immunosuppressive therapy (iatrogenic) and AIDS related (epidemic) KS (1). This discussion will focus on AIDS related KS.

In the 1980s there were many case reports describing disseminated KS in young homosexual men. These patients had a far more aggressive course than the KS previously seen in the classic form, which was limited to cutaneous involvement. This more fulminant KS had increased skin manifestations, visceral involvement, and was associated with opportunistic infections (such as Pneumocystis jirovecii). It frequently ended in death (2).  It was later recognized that these patients had a progressive immune deficiency, which later became known as AIDS, caused by HIV-1.  In 1994 KS was found to be associated with HHV-8, which is consistent among the different types of KS (3,4).

KS is an angioproliferative neoplasm of endothelial origin, which is characterized by the presence of proliferating spindle cells. HHV-8 has been shown to infect lymphatic endothelial cells and blood vascular endothelial cells and then proliferates or regresses based on host immune factors (5). Infection with HHV-8 is necessary but not sufficient to cause KS. HIV infection is thought to be a cofactor in tumorigenesis of KS. Multiple HIV encoded viral proteins have been studied and could contribute to the angiogenesis/tumorigenesis of KS formation, although more studies are needed (6).

In the US, KS is 20,000 times more common in patients with AIDS, although this has been declining since the widespread initiation of ART. KS is the most common AIDS associated neoplasm (7). It is most commonly seen in patients with a CD4 < 200 cells/mm3 although there have been case reports describing KS in patients with CD4 > 200 cells/mm3 (8). It typically presents with multifocal cutaneous involvement, involvement of the mucosal surfaces, lymph node involvement and visceral involvement. KS has been observed in almost all visceral sites, most commonly the gastrointestinal tract, respiratory system and oral cavity but involvement of bone and skeletal muscle are rare and most often reported in the African KS type.  In one systemic review, it was found that osseous involvement can be seen in all types of KS (9). Classic and African KS more often involved the peripheral bone and most likely represented local extension from a deep aggressive cutaneous lesion. AIDS and transplant related KS most commonly had isolated osseous KS in the axial or maxillofacial skeleton (9).  In this case, the patient presented with diffuse osteolytic lesions, so rare in KS that other etiologies were pursued and the patient underwent multiple biopsies to rule out other lymphoproliferative disorders.

One thing to be aware of when treating patients with KS is that there is a KS associated immune reconstitution inflammatory syndrome (IRIS). This is defined as a rapid progression of lesions and edema after initiation of ART. Case series and literature reviews have looked at KS flares in the setting of IRIS and noted that KS can become rapidly symptomatic and even fatal. Despite this all patients with IRIS-KS remained on ART and early systemic chemotherapy universally led to tumor regression. Fatalities were most commonly associated with pulmonary KS (12). IRIS-KS was most commonly seen in patients who had higher CD4 counts and KS edema at the time of initiation of ART (13). Therefore, clinical supervision is warranted when initiating a patient with KS on ART especially if there is pulmonary involvement.

Recognize the differential of lymphoproliferative disorders that can be associated with AIDS and HHV-8:

Other disorders associated with HHV-8 are primary effusion lymphoma (PEL), Multicentric Castleman’s disease (MCD), and POEMS, although POEMS is rarely associated with HHV-8 without concomitant MCD and was considered given the lytic bone lesions (3). PEL is a rare B cell neoplasm presenting with a malignant effusion in the peritoneal, pleural or pericardial space without an accompanying solid mass. PEL is usually described in HIV infected patients, although can rarely be seen in HIV negative patients with other forms of immunosuppression. PEL is also associated with co-infection with Epstein-Barr virus (EBV) in the majority of cases. The prognosis of PEL is extremely poor with a median survival of 6 months (10).

MCD is a lymphoproliferative disorder marked by expanded germinal centers with B cell and vascular proliferation. There are two forms: multicentric (plasma cell variant) and unicentric (hyaline vascular variant). Multicentric disease is usually associated with HHV-8 and occurs in the setting of HIV infection. MCD normally presents with fever, lymphadenopathy, splenomegaly, and edema. MCD can occur at any CD4 count. Instead of being associated with immunosuppression MCD is characterized by a dysregulated immune response and proinflammatory cytokines and can also be seen in ART related immune reconstitution (11). In 70% of HIV infected patients KS can coexist with MCD (10). In the case above, PEL was ruled out but MCD was never definitively ruled out. It is interesting to note that the patient presented with diffuse lymphadenopathy and recurrent fevers with significant lower extremity edema. He also had an increased population of plasma cells seen on biopsy of undetermined significance. His presentation could be consistent with disseminated KS and MCD together.

Disseminated KS is most often seen in patients with AIDS but is seen less frequently since the widespread use of ART. KS is associated with HHV-8 and presents with widespread cutaneous and visceral involvement. Osseous involvement is rare in HIV-infected patients, but does occur in other types of KS. PEL and MCD are other disorders associated with HIV and HHV-8. PEL should be suspected in patients presenting with malignant peritoneal, pleural or pericardial effusions. MCD should be suspected in patients with fevers and lymphadenopathy and commonly co-occurs with KS.