Evolution and Medicine: The loop of Henle, the complexities of its mammalian evolution, and the effect of loop diuretics 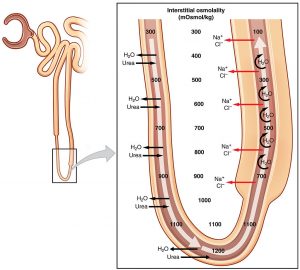 As a resident in internal medicine, hearing the words ‘Loop of Henle’ brings back memories from early medical school of complex diagrams of anatomy, ion transporters embedded in cell membranes, and equations calculating filtration and solute concentrations. The notorious loop and its physiologic function, involving terms such as countercurrent multiplication and corticomedullary osmotic gradient, seemed esoteric to me at the time and far removed from the practice of caring for patients that I had signed up for. But as I moved from the classroom to the wards to my early years of practicing medicine, I found myself thinking about Henle’s loop much more regularly than I would’ve imagined. From signing prescriptions of furosemide to drawing diagrams of nephrons for patients or students, the loop appears in my days frequently. What I did not know as a medical student was how the loop of Henle represents an incredible example of mammalian evolution, but one that is more complex than is initially clear. Further, the understanding of its biochemical processes is what allows physicians and scientists to manipulate its physiology to treat disease.

The loop was discovered by the German physician and anatomist Friedrich Gustav Jacob Henle, also known as Jacob Henle, in the middle of the 19th century [1]. Drastic improvements in light microscopy technology during this time allowed scientists to begin looking closer at cellular structures [2]. Amongst the numerous histologic findings Henle described in various parts of the human body, his most famous was in the kidney. There, he noted tubular loops that originated closer to the surface of the organ, at the level of the cortex layer, that dove deep into the medulla layer. He also found that the descending portion of the loop was thinner in diameter compared to the ascending portion in the outer medulla, and that there appeared to be a transition from thin to thick diameter in the ascending limb [2]. The purpose of these loops in the kidney and their thin and thick components, however, would remain a mystery to Henle as well as his peers for the remainder of the 1800’s.

The physiologic role of Henle’s loop in the kidney would not begin to be elucidated until after the 20th century [2]. Numerous biologists and physicians started to study the make-up of filtrate as it passed through the tubular system to become urine. Researchers confirmed the presence of distinct molecular transporters throughout the nephron that allowed the active or passive movement of ions, compounds, and water. Eventually, the loop of Henle was recognized to be integral to a process called countercurrent multiplication; the active transport of sodium and chloride from filtrate to interstitium in the thick ascending limb causes passive transport of water out of the tubule in the thin descending limb [3]. This, along with urea transport, facilitates the formation of a corticomedullary osmotic gradient in the interstitium, which in turn allows the concentration of filtrate in the collecting ducts prior to being excreted [4,5].

The evolutionary benefit of such a system is remarkable. Of the seven traditional classes of vertebrate animals, only birds and mammals have the ability to excrete urine that is hyperosmolar compared to their plasma [6]. Interestingly, birds’ ability to concentrate urine involves a similar countercurrent multiplying system as mammals. The loops of Henle in birds, however, do not have a thin ascending portion, as their entire ascending limb is thick. Further, the avian corticomedullary gradient is formed nearly entirely by sodium and chloride, without the involvement of urea [6].

The other classes of vertebrates, such as amphibians or any of the fish classes, secrete urine that is hypoosmolar relative to their plasma [6,7]. It makes evolutionary sense as to how animals that evolved to survive in drier habitats on land or in the air, such as many birds and mammals, would benefit from the ability to concentrate urine. As access to water becomes more limited, concentrating urine by increasing salt and water resorption in the kidney decreases unnecessary loss [6,7]. Yet the exact relationship between the loop of Henle and water retention in evolution is not as simple as it initially would seem.

As the physical shape of the loop of Henle is vital to the creation and maintenance of the corticomedullary gradient, it would follow that longer loops would allow for steeper gradients and greater capacity to concentrate urine. Indeed, this was supported by initial evolutionary studies that found that desert rodents had larger medullary thickness, a surrogate measurement for loop of Henle length, compared to rodents from environments with more moisture [8]. But this theory of longer loop length leading to greater concentration falls apart on closer evaluation. Firstly, larger mammals have larger kidneys and therefore larger loops, but in actuality mammalian body mass has been shown to be generally inversely related to urine concentration [9]. Several theories have been proposed to attempt to reconcile this with our understanding of how the loop works. One such explanation points out that, within any given kidney, the nephrons are not all equal in terms of length. An anatomic distinction has been made between “long” loops and “short” loops; the long loops are the ones that run deep into the inner medulla while the short loops stop in the outer medulla [10]. Different species have different relative percentages of long vs. short loops within their kidneys; for example, humans have roughly 85% short loops and 15% long loops in the kidney [11]. Thus, perhaps mammals with higher ratios of long loops to short loops would have greater ability to concentrate urine. This idea has not been found to be fully supported by reality, however. While species that have only the short-type nephrons in their kidneys, such as beavers, have been shown to have low urine concentration, the species that have only long-type nephrons have only average urine concentrating capability [10].

Other studies looked for different solutions to the discrepancy between loop length and ability to retain water. One study attempted to correct the thickness of the medulla for overall body mass and found that there was still a positive correlation between the relative medulla thickness of different mammals and urine concentration [12]. Another study looked at the biochemical profile of loop function; these researchers found that kangaroo rats from an arid environment had higher protein expression and activity of sodium-potassium ion transporters in the thick ascending limb than other rodent species [13]. This would suggest that cellular variables like genomic expression and protein function may add an additional effect to length of the loop alone.

In addition, the apparent inconsistency between strict loop of Henle length and ability to concentrate urine may lie in the fact that our understanding of the loop remains limited to this day. While the role of the thick ascending limb in sodium chloride transport and creating an osmotic gradient in the outer medulla has been well-described [3,4,5], the function of the thin portion of the ascending limb, which exists in the inner medulla, remains less clear. It has been established that the steep interstitial osmotic gradient exists in the inner medulla as well, which contributes to the concentration of filtrate as it moves through collecting tubules. It is postulated that the thin ascending limb plays a role in establishing this deeper gradient [5]. The mechanism is less clear, however, as research has shown that the thin limbs do not participate in active transport of solute, unlike the thick ascending limb [14]. This section of the loop is thin because its epithelial cells are physically thin; they lack the dense mitochondria and energy consumption of the epithelium in the thick ascending limb [15]. Animal studies have suggested that the thin ascending limb is permeable to passive diffusion of sodium, chloride, and urea while being impermeable to water [14]. Researchers have created mathematical models as well to better describe the movement of solutes in this portion of the loop [16,17]. Ultimately, understanding this portion of the loop of Henle may be the key next step in elucidating the evolutionary connection between the loop and urine concentration. For instance, it has been found that in mammals from mesic habitats, which have a moderate supply of moisture, the thickness of the inner medulla (a marker for the length of the thin ascending limb) is significantly positively associated with ability to concentrate urine [18].

The loop of Henle plays a key role in the kidney’s ability to retain solute as well as concentrate urine. And yet, in day-to-day patient care, different types of medicine are used to disrupt the processes of the kidney to treat disease. Loop diuretics were first discovered in the early 1960’s and were found to be extremely effective in increasing urine output [19]. These drugs, which include furosemide, bumetanide, and torsemide, have their main site of action in the thick ascending limb of the loop of Henle [20]. These diuretics are secreted into the tubular lumen in the proximal tubule of the nephron before traveling to the thick ascending limb, where they block the electroneutral sodium-potassium-2 chloride pump NKCC [21]. The effect of this decreases solute transport from filtrate to interstitium, which disrupts the interstitial osmotic gradient and reduces water resorption as well. Thus, the loop diuretics can be used to treat conditions of sodium and water overload, such as ascites, congestive heart failure, and high blood pressure, diseases that are encountered nearly daily in internal medicine.

Jacob Henle first noted tubular loops that extended from the cortex to the medulla of the kidney 150 years ago, but the mysteries of these loops continue to be researched today. The loop of Henle and the kidney represent one aspect of how animals have evolved to survive in different habitats, but the ability to retain salt and water is determined by more complicated factors than just the size or number of the loops. Scientists and physicians have made use of loop diuretics to disrupt the function of the loop in our care of patients, but perhaps a deeper understanding of evolutionary aspects of the loop and its mechanisms will allow for better therapies to be created in the future.