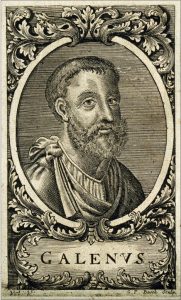 In 150 AD, Greek physician and philosopher Galen wrote of a woman suffering from insomnia: “I was convinced the woman was afflicted not by a bodily disease, but rather that some emotional trouble grieved her, and it happened that at the very moment I was examining her this was confirmed” [1]. He goes on to write that in response to receiving emotional news, her pulse became irregular, she became agitated, and these signs pointed to a “troubled mind.” It is unclear what this woman truly ailed from, but the clinical scenario bears resemblance to what is called “functional neurological disorder” (FND). In this article, we will discuss how to diagnose an FND and what bedside maneuvers we can use to help suggest it.

The term “conversion disorder” is probably the oldest accepted term for the group of conditions broadly defined as “neurological symptoms in the absence of a medically explainable etiology.” It replaced “hysteria” in the lexicon (dropped from DSM-III in 1968) and highlighted that an unconscious process likely causes these deficits rather than frank malingering. Unfortunately, the term “conversion” biases one to assume a psychological stressor must always be present to have such deficits, which is not true [2]. Other examples of pejorative phrases providers still use are “pseudoseizures” (a specific subtype of FND) or “psychogenic” which imply patients “make up” their symptoms. For these reasons, the terms “nonepileptic seizures” (NES) and “functional neurological disorders” are preferred by experts because they are the most neutral sounding to patients.

As we will see, FND is a challenging diagnosis to make. Part of the challenge is that FNDs are common and often co-morbid with other neurologic conditions [3]. While epidemiological data that evaluate its prevalence are imperfect due to methodological limitations, some studies estimate that 5% of hospitalized patients meet criteria for FND and up to 25% of them have at least some features suggestive of it [4]. Interestingly, however, in studies that examine the rate of misdiagnosis, neurologists are frequently accurate in their initial identification of FND, and only 0.4-5% of patients ever require revised diagnoses [5,6]. So how are physicians making this diagnosis?

According to the DSM-V, a functional neurological disorder is one in which  A) the patient has at least one symptom of altered voluntary motor or sensory dysfunction, B) clinical findings provide evidence of incompatibility between the symptoms and recognized neurological or medical conditions C) the symptom or deficit is not better explained by another medical or mental disorder and D) the symptom or deficit causes clinically significant distress or impairment in social, occupational, or other important areas of functioning or warrants medical evaluation. [7]. Of note, the presence of a psychological stressor is not required for diagnosis in DSM-5, as it was in DSM-IV-TR.

Therefore, the key to diagnosing an FND lies in the history and bedside exam. While there is not enough time to discuss every single exam finding that is suggestive of FND, we can discuss some of the more prominent ones that come up frequently in clinical practice. For example, nonepileptic seizures are a commonly encountered subcategory of FND. Seizure semiologies that have evidence base to suggest a functional etiology include: closed eyelids, resistance to eyelid opening, duration longer than 2 minutes, opisthotonos (i.e. tetany like arching of back and neck), asynchronous limb movements, side-to-side head shaking, and rapid reorientation post-ictally [8,9]. However, these signs can also sometimes occur in epileptic seizures, and definitive diagnosis requires capturing a typical event on video EEG. Interestingly, patients often have both epileptic and nonepileptic events, and up to 50% of patients with NES may also have epilepsy [10]. 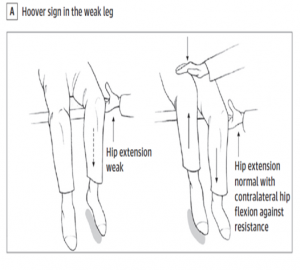 For functional movement and sensory disorders, the diagnosis can be even more challenging to make, with poorer interrater reliability. The hallmark of these disorders are “inconsistencies” in the neurologic exam, such as the suppression of symptoms with distraction. One of the most famous exam maneuvers illustrating this is the Hoover sign, named after early 20th century American physician Charles Franklin Hoover. When a patient reports hip extension weakness, if the weakness is only present on direct confrontation but not on contralateral flexion against resistance, that represents a positive Hoover’s sign and suggests an FND. The sensitivity and specificity of Hoover sign in a recent prospective trial of 337 patients presenting to the hospital with suspected stroke was 63% and 100%, respectively [11]. An obvious caveat of this study was there were only 8 patients who ended up having an FND.

Another example of an FND clinical sign would be if a patient reports unilateral limb weakness as seen in a stroke but displays weakness in head turning towards the affected side. The sternocleidomastoid, if truly weak on the affected side, would prevent full strength rotation to the opposite side. One dedicated study to this sign found the interrater reliability to be high (Cohen d = 0.83), specificity to be high (90%), but sensitivity to be low (63%) [12]. Finally, a commonly used sensory examination finding that suggests FND is “splitting of the midline” of the vibratory sense in a single bone. For example, if a clinician places a tuning fork on the lateral aspects of the frontal bone, regardless of neurological status, the strength of vibration should be equal. However, in FND patients presenting with mostly one-sided symptoms, they might report their weaker side as having less vibration than the contralateral side.

Experts agree that these examine maneuvers can highly suggestive of FND, and it is preferable to rule-in the diagnosis using the above criteria rather than make it a diagnosis of exclusion. Increased testing such as MRI or EMG can delay diagnosis, worsen disability, and incur high medical costs on the patient and healthcare system [13].

Although the topic that Galen wrote about is certainly ancient, physicians in the 21st century still struggle with the same issues. We see patients with neurologic deficits but no obvious structural or medical cause, and we say therefore their issues must be functional. One could not help but wonder if this represents a true metaphysical category of disease or an epistemological deficiency in our medical knowledge. In other words, when patients present with FND, are their symptoms truly unexplainable or do we lack the right tools to be able explain it? For example, using fMRI, we now have evidence that patients with FND display differences in the activation of their supplementary motor and prefrontal cortices, suggesting impairments in self-monitoring may result in a feeling of lack of agency over movements. 14 Could future studies elucidate further the exact structural deficits underlying these disorders, and if that were the case, would the societal and medical stigma around these patients lessen?

It is important for physicians to be careful when discussing FNDs with their patients and especially avoid the pejorative terms discussed above. The power of any diagnosis, let alone one that invokes the complex and philosophically-loaded relationship between body and mind, cannot be understated. If patients felt their physician just did not believe their symptoms were “real,” they would continue to bounce around the medical system, incurring costs and risky interventions, and progress in their disabilities. Instead, an approach that validates symptoms is preferred and a useful metaphor to explain this to patients is the “software vs hardware” analogy. In FND the nervous system “hardware” is okay, but there is an issue with the “software” that can be fixed when appropriately treated.

This is a thoughtful, sensitive discussion of a complex diagnosis that is often misunderstood. The author correctly emphasizes that functional neurologic disorder (FND), historically treated as a diagnosis of exclusion, in truth is diagnosed on the basis of positive findings of inconsistency between the patient’s symptoms and known manifestations of neurologic dysfunction. The presence of a psychological trigger is not required for the diagnosis: while some patients can identify a recent stressor and are open to a psychological interpretation of their symptoms delivered by an empathetic medical provider, many patients–consciously or unconsciously–adamantly deny psychiatric complaints.

An honest discussion about FND and the rationale for diagnosis, including the positive exam signs identified in the patient, is considered to be a primary tool of treatment. Patients are most likely to improve when their experiences are validated and when they are given a potential avenue for recovery (eg physical therapy) that does not require accepting a mental health diagnosis. This article reminds us of the importance of the physician-patient relationship in the clinical practice of medicine, and of the vast difference transparency and a non-judgmental stance can make in the evaluation and treatment of even complex disorders such as FND.