Spotlight: What are the Clinical Implications of Prominent Trabeculation: Cardiomyopathy or Normal Variant? 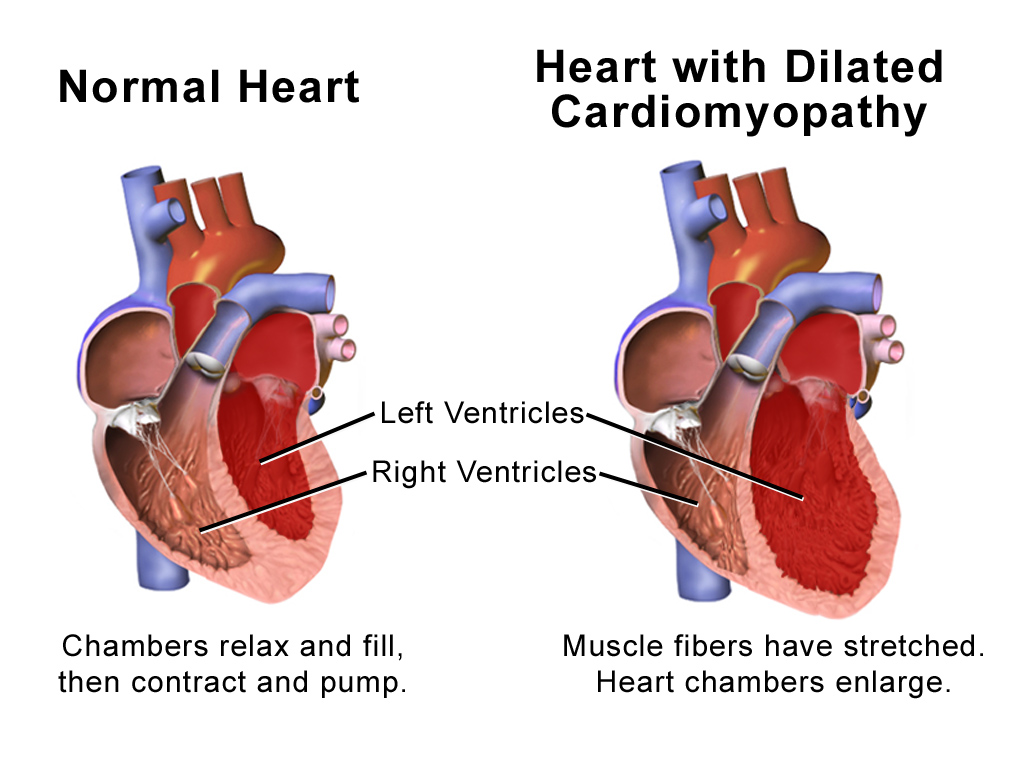 A 33-year-old man originally from Barbados with a history of untreated hypertension presented in DOC custody for abnormal lab findings on prison intake. Vitals and initial labs on arrival were notable for a blood pressure of 180/53, a potassium of 2.6, and a troponin of 0.17. The patient was completely asymptomatic and denied symptoms leading up to his hospitalization although when pressed further did report a fifteen-pound weight loss over the past three months and one remote syncopal episode. Of note, the patient’s mother had a history of a “dilated heart” of unclear etiology. The patient’s presentation was consistent with hyperaldosteronism given the combination of refractory hypokalemia and hypertension. CT imaging was obtained which was notable for a right-sided adrenal adenoma amenable to surgical intervention. In preparation for surgery, echocardiography revealed severe inferior hypokinesis with an ejection fraction of 35% as well as prominent left ventricular trabeculation highly suggestive of non-compaction. The patient subsequently underwent laparoscopic right adrenalectomy during which an encapsulated adrenal adenoma was removed followed by improvement in blood pressure and metabolic derangements. Given the recent surgery and labile blood pressures post op, anticoagulation and goal directed medical therapy were deferred for outpatient management, and the patient was discharged with cardiology follow up.

LV Noncompaction Cardiomyopathy (LVNC) is a rare disorder of the myocardium thought to be caused by disruption of cardiac myofiber compaction in utero. Occurring in less than one percent of the population, this condition is typically defined by prominence of ventricular trabeculations with deep intertrabecular grooves and thinning of the compacted myocardial layer. While inheritance is complex, LVNC has been linked to a number of predominantly X-linked diseases such as Barth’s Syndrome in pediatric populations. Adults however tend to present with isolated LVNC without evidence of the X-linked syndromes often seen in children suggesting slightly different modes of inheritance.1 Regardless of age of onset, both cohorts experience similar rates of the major clinical manifestations of LVNC, predominantly heart failure, thromboembolism, and arrhythmia.1 When this condition first came to the attention of the medical community in the early 2000s, prognosis in LVNC was thought to be extremely poor following diagnosis with early reports of four year mortality, thromboembolism, and ventricular tachycardia rates of up to 35%, 24%, and 41% respectively.2 However, early analysis of this condition primarily revolved around symptomatic patients presenting with decreased ejection fraction. As the diagnostic criteria for LVNC were applied to asymptomatic cohorts, the clinical significance of hypertrabeculation became less clear.

Identify common causes of prominent trabeculation and its clinical significance

While hypertrabeculation may be associated with LVNC, prominent trabeculations have been found to be quite common in asymptomatic patients as well. Using the multiethnic study of atherosclerosis (MESA) cohort, researchers evaluated 1,000 subjects from the general population and found evidence of regional hypertrabeculation meeting criteria for LVNC on MRI in 43% of subjects (6% had multiple hypertrabeculated regions).3 Findings such as these brought the initial characterization of LVNC as a rare and morbid condition into question. When these patients were followed over a period of nearly ten years, rates of stroke, heart failure, and other cardiovascular endpoints were exceedingly low. Furthermore, the degree of noncompaction was not found to be associated with decreases in ejection fraction or ventricular dilation.4 While early outcomes and diagnostic criteria for LVNC were established based on populations of symptomatic patients with typically decreased ejection fractions, findings in that cohort do not appear to apply to asymptomatic patients with incidentally identified non compacted myocardium. Subsequent post mortem studies have noted even higher rates of hypertrabeculation, identifying the condition in up to 68% of individuals at autopsy.5 Certain conditions such as transfusion dependent Beta thalassemia are associated with especially high rates of hypertrabeculation without other clinical manifestations of LVNC.6-8 Similarly, prominent trabeculations have been reported in nearly 30% of patients with sickle cell anemia.9 Among young athletes, prevalence of hypertrabeculation has been reported in up to 20% of patients, with individuals meeting diagnostic criteria for LVNC at significantly higher rates than population averages despite a lack of clinical manifestations.10-13 This pattern is also noted in a large proportion of asymptomatic pregnant women who tend not to develop other signs of cardiac pathology. Interestingly, this phenotype typically resolves when these patients are followed after delivery, suggesting a link between physiologic changes in pregnancy and increased cardiac trabeculation.14 Each of the aforementioned conditions are associated with changes in cardiac loading conditions, specifically increased cardiac preload. It has been suggested that increased trabeculation may be a benign adaptation to these hemodynamic derangements.14

Discuss diagnosis and management of patients with prominent trabeculations

Given the wide variability in etiology and prognosis among patients found to have prominent trabeculations, management can often be challenging. This is compounded by the fact that diagnostic criteria and treatment recommendations are varied and evolving. Diagnosis is typically made by imaging criteria, most commonly transthoracic echocardiography. Given the wide variability in trabecular morphology and clinical manifestations, further imaging such as cardiac MRI is commonly utilized to further clarify the diagnosis. There is a significant degree of discrepancy however between different imaging criteria, especially among athletes as well as African American and Caribbean patients. With no agreed upon gold standard against which to compare diagnostics, definitively diagnosing LVNC can be challenging based on imaging alone.10 Electrocardiography is typically abnormal in this condition as well, although no particular findings are specific to LVNC, making ECG of limited utility.15 The clinical manifestations in these patients are particularly important in distinguishing LVNC from normal variants. Patients with incidentally noted noncompaction without ventricular dilation, decreased ejection fraction, electrophysiologic manifestations, or evidence of thrombus are unlikely to develop clinically significant disease related to hypertrabeculation.  Management of LVNC is similarly lacking consensus and mainly driven by clinical manifestations and standard heart failure guidelines.1 Patients presenting with decreased EF are typically treated with standard goal directed medical therapy, consisting of a beta blocker, ACE or ARB, and aldosterone antagonist as tolerated. Similarly, defibrillators are implanted based on standard guidelines as well, as secondary prevention or in patients with an EF less than 35% on standard medical therapy. Given the increased risk of thromboembolism in this patient population, the use of anticoagulation in the absence of other indications such as atrial fibrillation is controversial. Anticoagulation is typically recommended for secondary prevention in cases of cardiogenic thromboembolism, including LVNC. Although no guidelines exist, given the elevated risk of thromboembolism in these patients, some experts recommend anticoagulation in any LVNC patient with an EF less than 40% or atrial fibrillation regardless of thromboembolic history or other risk factors.16 Given the heritability of this condition, first degree relatives are recommended to undergo screening with echocardiography when LVNC is suspected.1 In patients incidentally noted to have prominent trabeculations without the aforementioned clinical manifestations, serial monitoring with echocardiography is appropriate to ensure ejection fraction remains stable, however no additional treatment is necessary.

Patients with noncompaction are an extremely heterogeneous cohort, made increasingly difficult to manage by the lack of agreed upon diagnostic criteria for LVNC. The presence of increased trabeculation as a normal physiologic response to cardiac loading conditions in a number of non-pathologic settings further complicates clinical decision making. Initial estimates of morbidity and mortality focused on symptomatic patients, many with decreased ejection fraction, likely over-estimating the clinical significance of this finding in otherwise healthy patients. Subsequent analysis of noncompaction in the general population demonstrated a high prevalence of this finding without the clinical manifestations noted in initial symptomatic cohorts. The mainstays of diagnosis and management of these patients revolve around evaluation of clinical manifestations such as heart failure, electrophysiologic disturbances, and thromboembolic phenomena, and treating appropriately based on standard heart failure guidelines. While patients presenting with heart failure in the setting of noncompacted myocardium are at high risk of cardiac morbidity and mortality, asymptomatic patients incidentally found to have increased trabeculation are likely normal variants who can be managed with regular follow up. Prominent trabeculation can be either a distinct cardiomyopathy or a normal variant, primarily based on clinical manifestations.