Evolution and the Vermiform Appendix 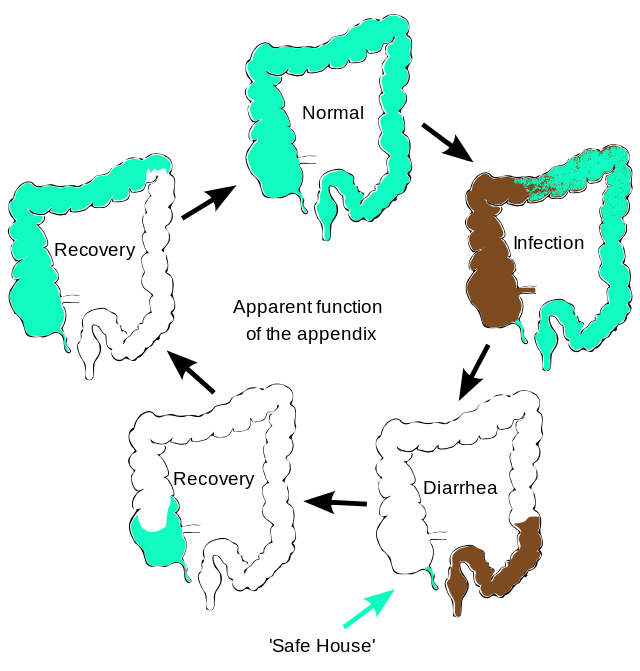 Appendicitis is the most common reason for urgent surgery related to abdominal pain in the US, with a lifetime incidence of 8.6% for men and 6.7% for women.1 The current standard of treatment for uncomplicated appendicitis is appendectomy.2 Removal of the appendix is done without regard to the implications of its absence, as the appendix is historically known to be a vestigial structure that is not vital for daily function or survival. However, while we tend to think about the appendix only as a common cause of acute abdomen, it is possible that the organ actually serves a greater function than previously thought.

The vermiform (‘wormlike”) appendix is a narrow closed tube that marks the beginning of the cecum and ascending colon.3 At full size it typically varies between 6-10 cm in length.3 Similar to the colon, the inner lining of the appendix consists of mucosa and submucosa, and the outer layer is formed by longitudinal muscle.3 The mucosal layer contains various immune regulatory cells, such as immunoglobulin-producing plasma cells, CD8+ regulatory T cells, and M cells.4 The submucosal layer contains numerous lymphoid follicles with germinal centers that represent activating B-cells.3 This extensive network of lymphoid follicles is not seen elsewhere in the colon.4 The appendix is also home to natural killer T cells and other unique lymphocytes.4 Part of this is due to the specialized markers expressed on the surface of these cells that are not found elsewhere in the intestines.4

Given that the appendix is the host of various immune cells, it is not surprising that it plays a role in regulating immune function. Studies have shown that one of its most important functions is its interaction with microbial flora.4 The large intestine lining is covered by a biofilm that consists of commensal gut bacteria surrounded by mucus.4 This is thought to serve as a protective barrier by preventing pathogens from crossing into the intestines.4 The biofilm also permits a symbiotic relationship with the commensal gut bacteria, as it will undergo cycles of shedding and re-colonization with beneficial bacteria.5 However, this intestinal biofilm can be disrupted by diarrhea-producing GI infections. This presents a unique role for the appendix because its location protects it and the biofilm lining it from diarrheal clearance.4 In this way, the appendix preserves the commensal bacterial flora and facilitates re-colonization of the gut following illness.6-8 Additionally, studies have shown that the appendix produces large quantities of mucin and secretory IgA, which contribute to a pro-microbiotic environment.4,8 Therefore, it’s possible that the appendix may play a pivotal regulatory role in the intestinal immune system.

The immunological role of the appendix is supported by studies of patients who have had appendectomies. A retrospective Korean National Healthcare database study of over 400,000 appendectomy patients found that appendectomy was associated with an increased incidence of Crohn’s disease (incidence rate ratio [IRR] 4.40, 95% confidence interval [CI] 3.78-5.13) and ulcerative colitis (IRR 1.78, 95% CI 1.63-1.93), and potentially other diseases such as Clostridioides difficile infection, sepsis, and colorectal cancer.9 However, other studies have shown that the immunological processes of the appendix may serve as a priming site for ulcerative colitis,10 and that appendectomy may actually be protective against the development of ulcerative colitis.11-13

While the appendix (literally, something “added on”) is not an essential organ for daily function and survival, it is not merely a vestigial organ that has continued to exist as a byproduct of evolution. The appendix plays a role in immunologic regulation of the intestinal immune system by interacting with the intestinal flora. More studies are needed to determine the effect of appendectomy on the development of autoimmune diseases and intestinal infections.