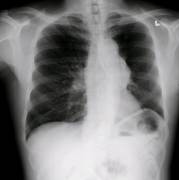 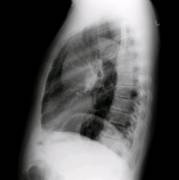 Before you read the answer you will probably want to review the original post of the mystery quiz from last week. 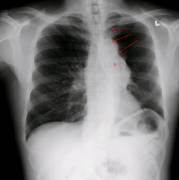 All of the above findings are more easily seen on the two CT  images below.  Note the cutoff of the left upper lobe bronchus by an intraluminal mass (arrow), and the airlessness of the collapsed left upper lobe (B). 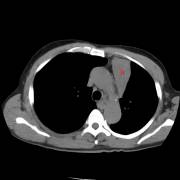 This patient subsequently developed hoarseness related to involvement of the left recurrent laryngeal nerve which was invaded by tumor thus indicating non-resectability of this lesion.  The biopsy of the endobronchial lesion at the left upper lobe revealed non-small cell carcinoma.

Although a peanut or foreign body was not responsible for these findings, several respondents correctly identified the volume loss and implied collapse of the left upper lobe.