What is Wellens’ Syndrome?

Wellens’ syndrome refers to a pattern of ECG signs occurring during chest-pain free periods in patients with unstable angina, heralding critical, proximal left anterior descending artery (LAD) stenosis [1,2]. The eponym honors Dr. Hein J.J. Wellens who first described this ECG phenomenon in 1982. Wellens and colleagues identified a subgroup of patients with unstable angina who demonstrated a pattern of inverted precordial T-waves which strongly correlated with early large anterior myocardial infarction (MI) and a poor prognosis [1,2]. In fact, seventy-five percent of these patients who were treated conservatively progressed to develop an extensive anterior MI despite receiving standard medical care. The investigators went on to show that the majority of these patients had severe promixal left anterior descending (LAD) disease.

The warning T-wave changes of Wellens’ are not uncommon in patients with unstable angina. In the original study, 18% of angina patients exhibited symmetric, deep TWI or biphasic T waves in V2-V5 or V6. The prognostic importance of these T wave changes was demonstrated in a subsequent study which found that sensitivity and specificity of an anterior TWI of 2 mm or greater indicating a significant LAD obstruction was 69% and 89% respectively, with a positive predictive value of 86% [3].

Interestingly, the pattern of ECG changes seen in Wellens’ has been described in patients without chest pain. During episodes of chest pain the ECG can transiently show positivization of T waves or pseudonormalization, or – more likely – ST depressions or ST elevations.  Clearly, the not-uncommon warning sign of Wellens’ is a critically important ECG finding for physicians to recognize and intervene upon. The recommended treatment for such patients is an early invasive approach, either with cardiac catheterization with angioplasty or coronary artery bypass surgery.

Today, Dr. Wellens serves as Chairman of the Scientific Council of the Interuniversity Cardiological Institute of the Netherlands. Previously he was the founder and head of the department of cardiology at the University Hospital Maastricht from 1977 until 2000. Throughout his career he has written more than 680 international scientific publications and 14 books on cardiology. Other notable achievements include early work on programmed electrical cardiac stimulation in patients with Wolff-Parkinson-White and the demonstration that such stimulations, when appropriately timed allowed creation of cardiac arrhythmias and subsequent study of the effects of antiarrythmic pharmaceuticals on the mechanism of these dysrhythmias. His extensive work in electrophysiology formed the foundation for innovative surgical and pacing approaches in the treatment of cardiac arrhythmias. 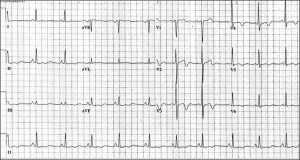 Figure 1: Biphasic T waves can be seen in leads V1, V2, with inverted T waves in V3-V6. (Image taken with permission from http://www.ems1.com)

2 comments on “What is Wellens’ Syndrome?”