A Vaccine Against Nicotine—New Hope or Mere Hype? 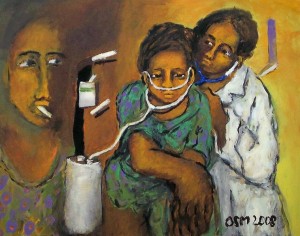 Cigarettes remain an anathema to many physicians.  Like so many unhealthy behaviors over which a clinician has little control, it can be frustrating to deal with a habit that can do so much harm to a patient, but which may be deeply entrenched in his daily life.  Although the percentage of current cigarette-smoking US adults has steadily decreased from 34.1% in 1978 to 19.8% in 2007 [1] there remains vast room for improvement.  A fifty-percent reduction in US smokers could save the country $96 billion a year.[2]  It is exciting that a new pharmacological agent will soon be available to help patients overcome what is possibly the most addictive drug on the planet.

Three companies are currently working on nicotine vaccines: Nabi Biopharmaceuticals in the US, Cytos AG in Switzerland, and Celtic Pharma in the UK.[3]  The American product NicVAX® will most likely be the soonest approved in the US and is the focus here.

The basic design of the vaccine depends on the production of an antibody response that generates immune complexes of nicotine-anti-nicotine immunoglobulin G so large that they cannot cross the blood-brain barrier.  The smoker has diminished stimulation of nicotinic receptors in the brain and decreased pleasure in response to smoking.[3]  The proof of concept was first demonstrated in animal studies.[4]  In one study, rats that had been vaccinated were compared with non-vaccinated controls.[5]  The groups were administered large doses of nicotine, then a final radio-labeled dose of nicotine.  Blood and brain levels of nicotine were compared in the two groups, with brain levels significantly reduced in the vaccinated group compared to the naïve group and serum concentrations of nicotine higher in the vaccinated group.

In a double-blinded phase II clinical trial for Nabi’s nicotine conjugate vaccine (NicVAX®), four serial vaccinations at doses of 0 (placebo), 50 µg, 100 µg and 200 µg were given to smokers who had no intent to quit.[6]  The outcomes were safety and immunogenicity.    Safety was assessed via physical examination, vital signs, electrocardiogram, blood and urine tests, recorded adverse events, and questionnaires on allergic reactions.  The trial indicated that nicotine vaccine is safe and well tolerated.  Antibody levels were assessed with ELISA and found to reach levels of >30 µg/mL in the 200 µg group.  This level had been demonstrated in independent studies to substantially change nicotine distribution in rats.[4]  The study recruitment size was small (n=68); however, in this trial there was no indication of compensatory smoking or increased nicotine withdrawal as measured by subjects’ self-reported daily smoking and cravings, carbon monoxide blood levels, and urinary nicotine metabolite levels.

In Phase IIb clinical trials, the study design was altered so that some groups received an increased dose of vaccine and more shots were administered.[7]  The trial was also double-blinded and placebo-controlled.  301 participants enrolled, all of whom smoked at least 15 cigarettes per day, with an average consumption of 24 cigarettes per day at enrollment.  At 6 months, the primary endpoint–continuous carbon-monoxide-confirmed abstinence from weeks 19-26–was found to be significantly higher only in the participants with the highest antibody responses to the vaccine (the top 30%).  24.6% in this group were abstinent compared to 12% in the placebo group (p=.024).  At 12 months, the subjects treated with the “optimal dose” of nicotine conjugate vaccine–five injections of 400 µg–had a 16% quit rate and remained abstinent versus 6% of the placebo group (p=.038).  The 400 µg group was the only group that had a statistically significant difference from the placebo group in 12-month sustained abstinence.

Double-blinded, placebo-controlled Phase III trials are currently underway with a primary outcome of smoking abstinence rate at 12 months.[7]  The results are expected in 2011 and 2012.  Participants must be current smokers who smoke at least 10 cigarettes per day and will receive 6 shots over 6 months.  Each trial is enrolling approximately 1000 participants.

While current evidence and statements from Nabi and other groups look promising, physicians must look keenly into the results of the phase III trials currently underway to see if the vaccines are truly effective, especially since the prior trials have had lower enrollment numbers. Le Houezec published a thoughtful commentary in Clinical Pharmacology and Therapeutics in 2005.[8]  While maintaining an optimistic tone, he judiciously pointed out factors that physicians will have to keep in mind, should the vaccine become available.  To summarize: 1) Patients have variable responses to vaccinations and some may need regular boosters.  2) Physicians should continue to monitor both studies and their patients using nicotine vaccine therapy for evidence of compensatory smoking: he notes that production of IgG in response to vaccination is capped at no more than 0.1-0.2 g/L and that this amount of IgG could be overcome by the amount of nicotine in ten cigarettes.  3) Patients should begin cessation at an appropriate time after vaccination, as antibody response may take months.  4) The vaccine would be best for smokers wishing to quit, ex-smokers wishing to avoid relapse, and adolescents hoping not to start.  The Phase III trials should be able to address some of these issues, particularly points 2 and 3. Other issues on the table will be cost and the availability of blood tests to see if patients are producing adequate antibody.  Nabi has created its own ELISA test to detect nicotine antibody, which will enter into the cost of the vaccine.[6]  Finally, the six injections being administered in the phase III trials require a burdensome time commitment. The cost-benefit ratio in terms of time, money, and success rates will undoubtedly affect the practicality of the vaccine.

If NicVAX® proves to be relatively inexpensive and safe and if Nabi can come up with a way to distribute it in fewer than six doses, it could become a mainstream element of tobacco cessation therapy.  It could potentially be applied to cessation of other tobacco products.  Based on current evidence and the willingness of the National Institute on Drug Abuse to grant Nabi millions of dollars to conduct these trials, the future looks promising.

Alas, the nicotine vaccine shall by no means act as a “magic pill.”  Patient education and participation remain crucial to success in smoking cessation.  Nevertheless, it may be a beneficial tool for physicians to help willing patients succeed in quitting.

One comment on “A Vaccine Against Nicotine—New Hope or Mere Hype?”